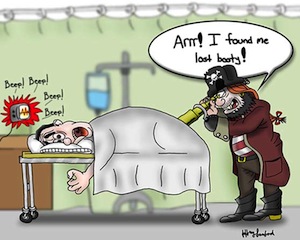 I wonder if my GI doc will be a pirate?

It is expected and logical that the eve of two surveillance scopes (lower and upper GI in a delicious one-two punch) would find me in a somewhat heightened state of anxiety.

Spend an entire Sunday (last week) at an adoption seminar, gearing up to take the plunge and start building the family that cancer stole from you.  Finally, you can see the light at the end of the tunnel, and the woman who runs your agency announces at the close of the day, “Everyone in this room will be a parent.”  How does that not give you chills?

But in the world of the survivor, pure, unadulterated excitement is invariably tempered. If not immediately, then soon enough.  For, one week after the adoption seminar, you will find yourself prepping for a colonoscopy and upper endoscopy.  Imagine how much you look forward to listening to Game Three of the NLDS while cleaning out your insides, running to the bathroom every five minutes.  Kind of a buzz kill.

These are “routine” scopes, for surveillance – one of the many perks of being a carrier of the HNPCC genetic mutation (HOLLA!)  You are almost three years post-diagnosis, and things have been going swimmingly.  Hell, people are even remarking on your awesome hair, asking admiringly, “What’s your secret?”  (It’s easy!!  Just get cancer!!)  But how can you not worry?  Every time you take a shit that isn’t picture perfect, you think, “Well, that’s it.  Obviously, I’m a goner.  Guess I won’t get to raise that baby after all.”  Or, better yet, “I hope Mike is cool with being a single parent.”

Put all of these emotions in a blender, and you come up with some seriously insane dreams.  A few nights ago, I endured a multi-layered sequence that was part Dali, part Paul Thomas Anderson, part David Cronenberg.  One moment, I was presented with my new “baby” – a preemie, small enough to fit in my hand, wearing just a tiny little diaper, and the next I was being told that my cancer had recurred – in my lungs, of all unlikely places.

All things considered, I rarely dream of cancer.  When I awake from a dream of recurrence, an excruciating mixture of relief and sadness washes over me.  The aftermath always leaves me newly attuned to my status as a survivor, as if my sub-conscious mind doesn’t want me to ever forget – not even for a second – what I have been through.

Today, the turbulence continued.  It’s Thursday:  my scopes are Monday (nice way to spend Columbus Day, I think.)  I am still awaiting confirmation that the GI practice has the referral from my primary.  I am determined to live Saturday to the fullest:  a long run in the morning (Denver Marathon relay, I am coming for you!), shopping for some new fall togs, then capping off the evening with good friends, good movies and good liquor.

Sunday and Monday stand to amount to no more than a brief interlude in the otherwise relentless parade of awesomeness into which my life after cancer has grown.  Four days after my scopes, I will be on a plane to Denver, preparing to embrace my First Descents family, a dear old friend from my pre-college life and most dramatically, running in my first ever marathon relay.  The six-plus miles that I plan to log during the marathon are not much more than the 10K that I ran over the summer, but it feels different – bigger, more dramatic.  Maybe it’s the sky, maybe it’s the altitude.  Regardless, I am pumped beyond belief.

But there’s a little demon in my mind.  The one who pictures the grim-faced GI doctor coming to my bedside in recovery, reporting, in a halting voice, about the “suspicious findings” in my colon.  The one who imagines news that will once again put my entire life on hold, and send me spiraling into a world defined by surgery and chemo.  Doing the whole wretched dance anew.

These are the thoughts we owe it to ourselves to let out.  When I put them out here, for the world to read, they become containable, and somewhat ridiculous.  Cancer is not going to capsize my life again, not now.  Maybe later – much later.  But not now.  Our rational minds know this.  It’s the demons inside that want us to believe differently.

As this day wound down, as I wrapped up an afternoon hearing and started imaging a cool fall evening at home with my husband and animals, I felt the familiar anxiety of the last two and a half years tighten its grip around my heart.  I checked my phone, and saw a message from a prefix that I recognized as my oncologist.  My heart lurched a bit.  My check-up isn’t until after Thanksgiving; why are they calling me now?

I listened to the message.  It wasn’t from my doctor.  It was from beloved Nurse Sarah, my favorite caregiver during treatment.  “It’s Sarah from Dr. Chu’s office,” she said, and then, knowing immediately where my mind would go, “Nothing’s wrong.  I was just thinking of you.  In a good way.”

In that instant, I went from the clutches of anxiety to a fullness of heart borne of the thought that someone who took care of me almost three years ago is still holding me in her thoughts.  Tears of gratitude fairly welled in my eyes.

I will admit that not long after receiving Sarah’s message, I nearly went nuclear on some poor assistant in my primary doctor’s office when I learned that the referral for my scopes still hasn’t been processed.  Tears started welling again, but this time, out of rage – and worry.  There is no accounting for the terrifying intensity of anxiety connected to scans and check-ups, the suffocating fear of imagining that your cancer has returned.

I didn’t hang up on the unfortunate young man at my primary doctor’s office, but I know I must have sounded a bit unhinged.  It was late in the day;  I’d just been a part of yet another termination of parental rights hearing – a phenomenon which always leaves me drained and sad, even though if it’s what I want for my client.  The voice on the other end of the phone had no idea what procedure or appointment I was scheduled for on Monday, or why I so urgently needed the referral.  He didn’t know I’d had cancer.  He had no idea how terrified I am of having it again.

But those are the realities that act upon me each day – some days, more than others. These are the markers of life as a survivor.

One Response to dreams, whiplash and pre-scope anxiety (oh my!)