It was the summer of 2007.  The Phillies were on their way to their first play-off appearance in 14 years.  My husband and I were riding in the annual MS 150 City to Shore bike tour, raising money and awareness as we always have to help fight the disease which has impacted his mother’s life so profoundly.  I was feeling restless at work and thinking about changing jobs.  We were trying to get serious about buying a house.  We were actively trying to start a family.

A week after Thanksgiving, I had an MRI which revealed a 10-cm mass on my ovary.  Less than a week after that, I was under the knife, having my ovary and fallopian tube removed.  I was diagnosed with stage IIIA ovarian cancer.  The day after New Year’s, 2008, I had my remaining ovary and uterus removed.  I spent Valentine’s Day in the hospital getting my first of 6 cycles of taxol and cisplatin.

In the end, I spent seven months out of work, slowly losing my mind, trying to eat, learning sudoku, reading like I imagined one does when one is incarcerated.  I joined Facebook so I could play Scrabulous.  Desperate times.

I finished chemo on June 11, 2008, and, astoundingly, returned to work three weeks later, the Monday after July 4th weekend.  The year since then has been a perplexing, exhilarating swirl of physical and emotional challenges.  I have crazy curly hair that has prompted more than few people (including my mother-in-law) to ask, “Did you get a perm?”  (Sweet Jesus.  May my follicles never again be subjected to the torment which they experienced repeatedly during my high school years. )  I have developed an unexpected fondness for running, which used to strike me as a distinct form of torture.  I will never bear my own children.

I grieve every day for the things I have lost, but I am living more fully than ever.

Welcome to the rest of my life. 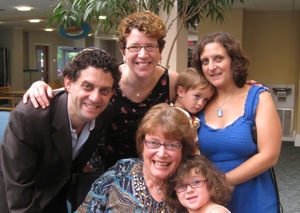