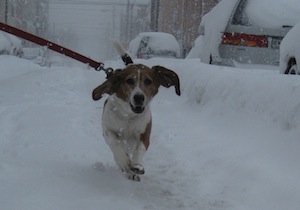 When my husband and I moved into the house we have been renting for the last three and a half years, our heads promptly filled with visions of the happy life we would live here, even the family we would build here. I remember distinctly, in those early days, Mike saying, “I want to live here forever.”

Home ownership was always the goal, but even getting set up in a rented big, comfortable rowhouse in the city felt like a significant step toward realizing the fantasy we’d both long held about being fabulous city-dwellers.

Our neighbors on either side have small children, and as soon as I realized how cool all of the young parents on the block were, I imagined our own child one day playing with all the kids in the neighborhood, and I saw me and Mike finally becoming those hip urban parents we’d always imagined we’d be.

A little over a year after moving in, I was diagnosed with cancer, and everything was turned on its head.  During the seven months I was out of work, the house that I loved so much at the outset became the site of my incarceration, the place where I spent countless hours by myself – crying, doing crossword puzzles, reading, communing with my fellow patients on Planet Cancer.  The two flights of steep stairs became a form of torture.  The sounds of the neighborhood children coming home from school at the end of the day, playing in the street, laughing and shrieking, became a kind of mockery of everything that I had lost.

But there were some good things about the time I spent in this house during those long lonely months.  My neighbor Iva became my guardian angel of sorts, and I will always be grateful to her for everything she did for me, the patience and caring she showed while seeing me at my absolute, rock-bottom worst.  I also was able to spend long hours outside, in our small back garden, taking care of green things, nurturing life.  I found immense peace and comfort in the rituals of gardening.

So, needless to say, when I think about the time we have spent here, and as I contemplate this chapter of our lives coming to a close, my feelings are decidedly mixed.  Still, it took me a bit off guard when, this past Friday, I had what we like to call a “wicked bad panic attack” about leaving this house, and the city, and beginning the next chapter of our lives just across the Ben Franklin Bridge in the great state of New Jersey.

One thing we know very well in our family is that things often don’t turn out as we expect.  Control is an illusion.  Most of us are living at the mercy of forces we can neither see nor understand.  Nevertheless, packing up and leaving the city is a choice, even if it is one that is based in large part on practical (read: financial) considerations.  And on Friday, I was gripped with indecision about whether it’s the right choice.

Pull back the curtain a bit on Friday’s freakout, and discover, not surprisingly, that anger, sadness and disappointment stemming from cancer were right at the center of so much of what I was feeling.  Leaving the city feels like a failure of sorts, like we are giving up on the dream we always had of spending our lives in an urban environment, and when I think about packing up our stuff and moving from our perfect little block, I think about the dreams we had when we arrived here, and all of the ways in which cancer has fucked us over.

I know that it isn’t cancer’s fault that the price of real estate in our current neighborhood is so over-inflated, or that the Philadelphia public schools are an atrocity, or that we haven’t been able to save tons of cash for a giant downpayment.  But when I found myself losing my composure on Friday, it sure was easy to point the finger at my favorite, life-altering disease. 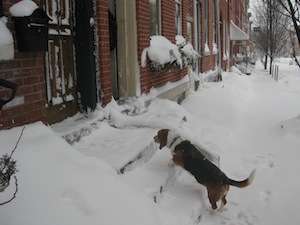 Our plans for the weekend originally were to drive up to NYC, have a quick visit with my nephew and then slide over to Queens to hang out with some of our favorite cancer friends.  The blizzard of 2010 disrupted those plans.  So instead, we ended up spending most of last night and the first part of this morning playing and recording some music, a favorite old ritual in which I always find immense comfort.

Music, as usual, proved to be a wonderful tonic to the anxiety and confusion that gripped me on Friday. Letting the notes ring out, letting the melody seep into me, proved cathartic, and cleansing.  Not coincidentally, perhaps, when I went for a run this morning, I imagined myself doing yoga on the deck of our new house, and pictured myself riding my bike around Cooper River.  Change is scary, and I will miss what we are leaving behind, but once again, I return to the lesson which cancer has taught us, over and over:  there’s nothing we can’t handle, and tomorrow is always a little brighter than today.