A wise person once said, “You don’t have to write a thousand words every time you sit down to do a post.”  The same wise person has also said, “One of your great gifts as a writer is how direct your language is.”  So, on a Friday afternoon, as the City of Brotherly Love become the City of Smotherly Love under an ungodly blanket of humidity, let me just say a few things.  Let me be pithy.  Or at least try.

To whomever is listening:  I am really, really tired of working in an office full of pregnant women.  It’s just hard.  It’s hard enough to have a job that constantly exposes me to drug-addicted, mentally ill or otherwise incapacitated people who are having children they cannot care for.  When I learn of yet another pregnancy in my office, it’s like getting punched in the gut.  It’s not even personal: some women I like and respect an enormous amount are starting families, and I am happy for them.  But it sucks for me.  There, I said it.

Some of you may remember, a few months back, me writing about one of my most gruesome cases – an eight month old child who nearly died of starvation at her mother’s own hand, in addition to suffering severe physical abuse.  She and her two and a half year old sister are still in foster care (for some reason, they are just entering a pre-adoptive home this weekend), and the mother is facing criminal charges.

Yesterday, I learned that this mother had another baby on Wednesday.  To top it off, no one knew.  Social workers met with her on Monday, and had no idea she was pregnant.  The baby – four pounds, eight ounces – was born two days later.  When she’s ready for discharge from the hospital, she’ll be my client, too.

Maybe, instead of representing this helpless newborn in dependency court, I should just take her home.

Meanwhile, in other news from the front, today I was in court with another mother who is in a drug-treatment program with her three and four year old children, while her one year old is in the care of her maternal grandmother.  In October, this woman will deliver her fourth child – coincidentally, the same month she is due to finish her in-patient treatment.  Then what?  Transitional housing with four kids under the age of five, while fighting to stay sober.

You tell me what’s wrong with this picture.

Life is cruel.  As Depeche Mode once sang, “I don’t want to start any balsphemous rumors/But I think that god’s got a sick since of humor.”  Obviously.  How else do I – a vibrant, caring, intelligent, big-hearted woman, robbed of my fertililty by cancer – end up in a work place populated with pregnant women while doing this insane job that continually shoves human misery and cosmic injustice in my face? 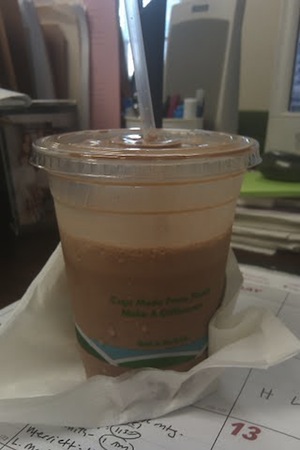 There is no explanation.  It’s bullshit.  So, I had a chocolate shake at 3 PM, and tonight I will go hear some loud rock and roll music and drink a beer.  Tomorrow, I will pack up the car and drive to the beach with my husband and dog.

Life’s what you make it.