By all rights, I should be curled up on the couch with Peter Carey’s Parrot and Olivier in America, sipping my Riverhorse Belgian Freeze, breathing deeply and calmly, engaged in some kind of conscious regrouping after a long and eventful weekend.  I got the beer part right, but I can’t seem to keep myself from the keyboard.

Was the weekend “epic?”  You might say so.  How quickly can I convey its meaning?  It’s 5:15 in the evening but feels much later – between turning the clocks back, speaking out and running hard, there’s a risk of coming off the rails quickly, and without warning. 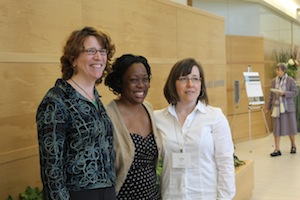 With Kerri Conner and Cathy Bueti after the panel

Yesterday, I had the privilege of sitting on a panel at the inaugural Women’s/Young Adult Cancer Symposium at Fox Chase Cancer Center – not my medical center, but a prestigious institution in a gorgeous setting, staffed with lovely and devoted practitioners.  I shared the panel with two remarkable young women, Kerri Conner and Cathy Bueti, both of whom have transformed their own cancer experiences into books and other amazing charitable and artistic endeavors.  There were things I would recommend that Fox Chase change, and the event definitely felt like a first attempt at something which I hope will become much larger and more powerful in the coming years.  Still, it was exhilarating to have a chance to stand before a group of people and share my journey from cancer patient – medicalized, demoralized – to warrior survivor, and explain the essential role which First Descents has played in my rehabilitation.

In an unexpected turn of events, I went WAY over my allotted time; twenty minutes sounded like an eternity, but once I started talking, I realized how desperately I wanted to share so many seemingly minor details of my experience.  There’s a lesson in that, I guess.  Dr. Mary Daly, the panel moderator, was apparently trying madly to have Mike, seated in the front row, get my attention, which he finally did, waving his program, at which time I sped through my last few slides and offered what must have sounded like a non-sensical string of thoughts about the Denver Marathon relay, connecting with other survivors and blah blah blah… 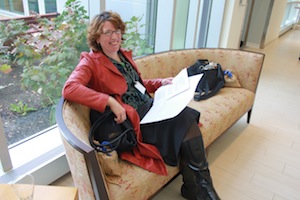 Who knew I liked to talk so much?

Despite what felt like a somewhat embarrassing and inauspicious end to my talk, I left the day feeling like I had accomplished something meaningful not only for myself, but for some of the women in attendance as well.  In particular, I was moved by the comments of one woman who told me how she was inspired by my story.  She was particularly struck by a slide of me on the rock-face in Moab, fighting my way up what we lovingly called The Devil’s Butt-crack.

“The way I thought of it,” she said, “was that you are up there on the mountain top, looking down at me, saying, “Come on up!  You can do it!  You can make it up here, too!” I was at first quite taken aback by this image of me in a place of exaggerated strength and prominence, “looking down” on other fighters and survivors, but as I looked at this woman – who appeared a good bit older than me – I could see reflected in her eyes the universality of the survivor’s struggle, regardless of age.

No rest for the weary, though, and this morning it was up like a shot (from a night of unspeakably surreal and somewhat unnerving dreams) and off to Campbell’s Field in Camden for the start of the Run the Bridge 10K.  Mike and I ran, along with 4,000 of our closest friends, back and forth across the Ben Franklin Bridge, through the streets of Camden and along the waterfront, 6.2 glorious miles.  I’d crafted a brilliant playlist for the event, and felt strong and invigorated the whole way.  I even shaved some time off of my pace from my 10K leg of the Denver Marathon just a few short weeks ago.  Mike and I crossed the finish line in the outfield back at the baseball park, our hands clasped and raised in triumph.  It may seem a gesture somewhat out of proportion with finishing a mere 10K, but no matter how many races I run, no matter the distance and no matter my pace, I never take for granted the feeling of exhilaration and achievement that comes with crossing that line.  The people watching me may not know my story, but I carry it with me in my heart, with every stride, and it makes every finish that much more meaningful. 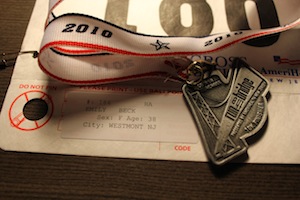 While I ran, my mind was very much on my First Descents family members who were a few miles up the road, running in the New York City Marathon.  I thought of Lemondrop and Double-Oh-Seven, and Brad and Ryan, and Beemer’s sister, and I just felt the smile taking over my entire body.  All of us in our own ways, from different places of strength and ability, put one foot in front of the other today, and showed cancer who’s boss.  Good for us.