It is an admittedly irrational fear of mine that if I rest for too long, or indulge in too much stillness, cancer will somehow have won.

Ridiculous, I know.  I am three months shy of the third anniversary of my diagnosis.  To say that I am thriving would be be an understatement.  The ironic reality is that I lead a more active and fulfilling life than I did before cancer; joy and contentment are driving forces, where fear and restlessness were once the order of the day.

Still, it feels odd to find myself puttering around the house on a humid, over-cast day, waiting for rain and indulging in a kind of restfulness that is increasingly rare.  (That is, if running endless loads of laundry and vacuuming in anticipation of my parents’ arrival tomorrow can be considered “restful.”)  A few of this weekend’s activities were cancelled at the last minute, so I have found myself with long expanses of free time, time that I have today decided to devote to catching up on work for the First Descents blog, unanswered emails, and reflecting here. 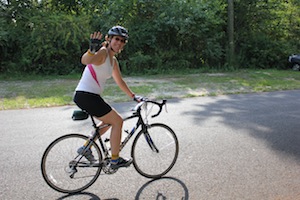 Yesterday, I rode 40 miles on my own.  Mike was to join me, but wasn’t quite himself after the previous evening’s revels, so I decided to power on solo.  I always prefer to cycle with a companion – unlike running, which I generally prefer alone – but I went out anyway.  The first few miles felt arduous, my legs heavy and my breathing labored. Eventually, though, I warmed up, and soon found myself pedaling with vigor and intensity.  I rode hard, and fast at stretches, and at the end of the 40 miles I was completely exhilarated – even ready for more.

Aside from passing the occasional fellow rider and offering a “Good morning,” as we passed each other, I rode in the stillness and silence that I so adore.  I whistled off and on, or sang a few bars of a random song (“Allentown,” “Sweet Caroline”), or said “Hey, Moo Cow” as I rode past a pasture populated with goats and bovines.  But mostly, it was quiet in my mind, and I arrived back at the house after three hours on the road with a cleansed spirit and an invigorated body.

There was to be another ride today, but I wanted company this time, and Mike was weary from battling the summer cold that I gave him a few days ago.  I considered going for a run, but when I stepped out with the dog at 8 AM and felt the humidity envelop me, the soreness in my shoulders from yesterday’s ride, and the lingering vestiges of my own cold, I decided that today would be a day of rest.

After cancer drained me of all life and energy, after spending days, weeks, months prostrate and poured out, the feeling of energy and wellness that comes from a strenuous bike ride or a difficult run is like a drug, a fix that goes right to the very core of my being. I’m addicted to it, and it’s a clear act of will to take a day and say to myself, “Rest.  Be.”

What I sometimes forget is that in choosing to be dormant for a day, I am not reverting to the throes of weakness and sloth that so defined me during my illness.  There is a stillness that is voluntary and restorative, that serves as a necessary antidote to the high -energy bliss that fills most of my days.

With today’s quiet, I am gathering strength, compounding the excitement and enthusiasm that will propel me out of bed tomorrow morning just before first light, and send me out the door to pound the pavement and fuel my soul for the week ahead.