In my own stillness today, it seems right to offer a round-up of a few of the fiercest fighters around me.  I often think about this ad-hoc community of young adult survivors that I am so blessed to be a part of  and how our shared strength and commitment to living life as fully as possible serves as a kind of never-ending kick in the pants.  On those (thankfully) rare moments when I feel like I don’t have the energy to continue pushing myself, I think about the heroes that surround me.  We aren’t in competition, but we are connected in this essential way.  Thanks to cancer, people I may never meet in person serve as powerful catalysts in the on-going saga of my own rehabilitation.

As the thunder rolls overhead, and the rains finally begin to fall, I’d like you to introduce you to just a few of them.

Holly, age 33, lives in Knoxville, TN and has just completed her treatment for ovarian cancer.  Holly and I were put in contact through our mutual friend (Melissa, aka Giggles), who I had the pleasure of attending First Descents camp with in Moab, UT this past April.  Shortly after returning from camp, Giggles connected us.  Holly was in the midst of treatment and having a hard time finding other young women to talk to about her experience with ovarian cancer.  I was more than happy to do whatever I could for Holly, and over the past few months we have exchanged virtual support and encouragement.

Holly wrapped up treatment earlier this month.  I always enjoyed checking in with her updates on her Caring Bridge site, especially seeing the numbered signs she’d hold aloft, counting down to her final infusion.  When I read her post about her last day of treatment, I was fairly stunned.  She described a surprise-party, a delicious meal (food?  right after treatment?!?) and teal-clad friends.  Her ability to be in the moment, to experience the full measure of what it means to survive treatment and take that first step toward the rest of her life genuinely astounded me.  That in and of itself constitutes an act of heroism.  (Suffice to say that my last day of treatment looked…well, different.)

A few days ago, I took note of Holly’s Facebook status and saw that she was already showing signs of being ready to “take on the world.”  It’s an impulse that I had hoped would seize me the moment I finished chemo, but the reality ended up being something quite different.  For me, the immediate aftermath of treatment was marked by torrents of rage and confusion, and later, extreme sadness.  For me, recovery was a rocky, winding road, and while it’s impossible to predict the future, I have a strong sense that Holly is well on her way to a post-cancer life defined by the same positivity and grace that she has exhibited throughout her journey thus far.

In the fall of 2008, not long after I finished my own treatment, I was matched through Imerman Angels with Jennie, then age 32.  Jennie’s diagnosis and treatment were almost identical to my own, and as fate would have it, we shared the same genetic mutation. From our first contact, Jennie blew me away me with her energy and determination. Following Jennie on her blog, I learned that she was a woman of incredible will who flat-out refused to let cancer slow her down.  I was constantly amazed at the level of activity she sustained throughout her treatment.  Sometimes, it seemed like Jennie, mid-treatment, had her shit more together than I did mine, post-treatment.  I often wondered if I was even able to be a useful support to her, as she seemed to have a life that was so full of friends and family who were buoying her along.

Jennie finished her treatment in the fall of 2009, and experienced some of the expected emotional hiccups over the winter, but with the coming of Spring came the resurgence of Jennie’s tireless energy.  A few weeks ago, I saw that she is now in the process of training for a triathlon to celebrate her one year anniversary of finishing treatment.  Again, looking back to my own condition (emotional and physical) one year out, I am awestruck when I see what Jennie is setting out to do.  While I recognize that every person reacts differently to treatment, and every person has a different journey back to wellness, there is simply no denying the sheer awesomeness of what Jennie has set out to do.  And to top it all off, she’s raising funds for the Ovarian Cancer Research Fund.

It’s another wonderful, cancer-themed ironic twist of fate that as I sit here today, Jennie, who I was matched with to provide support and guidance during her cancer fight, now inspires me.

Unlike Holly and Jennie, Caroline (aka Fridge) hasn’t had ovarian cancer, and is fourteen years my junior.  I have also been lucky enough to spend not one but two First Descents camps with Fridge in the past year.  I think of her as the younger sister I never had.

When I consider Fridge, who was treated for acute lymphoblastic leukemia in 2007, I think not only about what she has endured as far as her treatment and recovery, but I think about what it must have been like for her to experience a cancer diagnosis and everything that followed while in college, just on the verge of trying to figure out what her life might look like.  I know what it’s like to go through chemo, lose your hair, feel sick all the time, blah blah blah.  And I know what it’s like to be a wide-eyed, idealistic college kid.  What I can’t imagine, though, is what it’s like to have those two realities collide head-on. 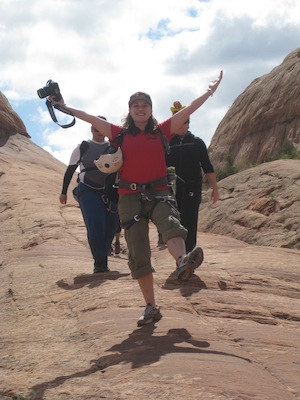 Fridge would probably be the first to tell you that it sucked, big time.  But to know Fridge now is to see a young woman of incredible talents (she writes! she sings! she plays guitar! she takes AMAZING photos!) with – yes, you heard me – her whole life ahead of her.

As if that weren’t enough, Caroline is in the process of training for the Chicago marathon (and fundraising for the Leukemia and Lymphoma Society) this coming October.  Every so often, she’ll write about her runs, and it’s like an incredible shot of adrenaline.  Over the year that I have known Fridge, I have watched her grow from a lovely, tentative young soul into a fierce, triumphant warrior, and I can’t wait to see all of the amazing things she’s destined to achieve.

There are countless other heroes around me whose spunk and sass and fearlessness help me get out of bed each day, but today, in my rare moment of quiet, I am particularly in love with these three.  I hope I’ve given you just the smallest taste of the light and magic they each possess.