running for my life

A huge box hastily labeled “CANCER STUFF” was finally opened today, one of the last from the April move.  The room it has inhabited since April 9 is at last turning into the study that I have been dreaming of for years, and so today I took scissors to tape and sliced it open.  I hadn’t packed it, so I wasn’t sure exactly what was inside, other than the enormous green “cancer book,” which for the past two and a half years has been stuffed with every single piece of paper related to my diagnosis, treatment and continuing surveillance. 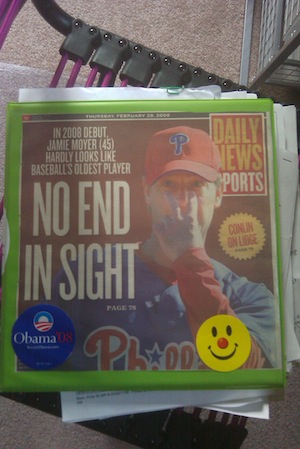 I unearthed the binder, as expected, along with a small pile of other cancer-related miscellany, including a series of pamphlets from my hospital – the ones with titles like “Research on Early Detection and Cure of Ovarian Cancer” (maybe not such helpful reading material for someone diagnosed Stage III.)  There were quite a few of these leaflets, none of which I had ever looked at; they were no doubt handed to me as I sat in my oncologist’s office on that cold, dark night, December 3, 2007, that changed everything.  I was in shock then; handouts were not the answer.

One of the pamphlets I came across this morning, which I certainly have no recollection of ever receiving or reading, was called “Walking for Fitness – Your Exercise Guide After Chemotherapy.”  The cover depicts a couple – late middle-age at least, perhaps borderline geriatric – arm in arm, smiling as they stroll.

I found it a bit ironic and sad;  I discovered this well-intentioned bit of advice from my cancer center the day after I completed my first-ever 10K race.  No one at my cancer center ever talked to me at any length about the process of rehabilitating a young, otherwise healthy, previously active body.  Instead, they handed me written materials aimed at encouraging old folks to start walking after treatment.

When I finished treatment, I didn’t want to walk; I wanted to run.  Without any real guidance, I developed my own, somewhat haphazard regimen.  I started with regular visits to the gym, gently moving my body on the rowing machine and stationary bike.  Breaking a sweat – a good sweat – for the first time  since before treatment was practically a religious experience.  At some point though, perhaps when I felt my stamina starting to come around, I became determined to run.  I can’t say why.  My post-treatment struggles were so focused on my feet – the aching bone pain; the incessant buzzing and tingling; the diffuse numbness; the sensation that I always had socks bunched up around my toes, even when I was barefoot – that I literally became obsessed with proving to myself that my feet could work for me, that they could not just hold me up and keep me steady on the ground, but that I could pound them into the ground, regularly, vigorously, and that they would not fail me.

The roots of my newfound passion for running, then, are at the root of me – my feet – the site where I am connected to the earth.  Everything else that has followed from running – weight loss, improved endurance – has been an unexpected reward.  My feet are still a source of aggravation, but I have reached a point where I know I can rely on them to carry me far (though perhaps not terribly fast) and that every step or stride does not have to be a reminder of the poisons that ravaged my body in the name of killing my cancer. 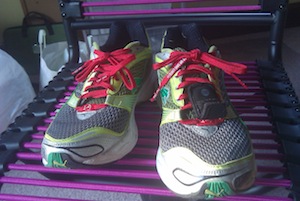 Earlier this week, on the eve of the 10K, my friend, also a young adult cancer patient, presented me with a pair of Nike (RED) laces.  The night before the run, I gleefully threaded them through my bright green Pumas, yielding quite a visual statement.  As I ran yesterday, on a brutally hot morning, along a poorly-designed course that ended, rather inhumanely, with a shadeless stretch across a high school football field and around a track, I periodically looked down at my feet and saw those bright red laces gleaming.  I thought of the people whose struggles the (RED) campaign hopes to help alleviate; of my friend who gave them to me, and the battles she has had with her own cancer; I thought, as I always do, of the young people I know who are boldly, bravely rebuilding their lives and bodies after surgery and treatment.  As we ran along the sandy roads of the Pinelands, surrounded by trees, I thought of my Uncle David, who lost his fight three years ago last month.  And, as invariably happens, I took the energy and courage of all of those people, and let it course through me as I felt myself sagging in the morning sun, struggling to make it to the end.

As I crossed the finish line and my pace slowed to a walk, I headed, alone, to the shade along side the school.  I walked on, my heart pounding, my skin stinging, and felt the tears rise.  They came easily, and I breathed out the sadness and relief and frustration and elation that they represented.  A minute or two later, rejoining my husband and friends, I collected myself with an intake of air, and came back to a place of strength, knowing that what I was feeling in that moment was unique to my experience as a survivor, and was perhaps impossible to share.

Later in the afternoon, after food and naps, Mike said to me, as we strolled through the oppressive heat, “I keep thinking about the summer of 2008.”  Meaning, of course, the summer that inaugurated my post-treatment life.  The summer when I couldn’t sit in the sun, or stand the heat, or climb stairs in our old house, when walking the dog for fifteen minutes was a Herculean task from which I would require extended rest and hydration to recover.  “I think of what was going on then, and what you can do now, and it’s amazing.”

It is amazing, and I think about it every single time I lace up my shoes, or climb on my bike.  I will never, ever take for granted the chance I have been given to once again fully inhabit my body.  When I come across reminders like I did today – relics from my life as a full-time patient – a chill goes through me, memories flood my mind.  But then, a moment later, I give thanks – for the reminder of what happened to me, so that I can better appreciate the person I have become.

One Response to running for my life