Today, not to minimize real weather catastrophes like tsunamis in Indonesia and hurricanes in New Orleans, has been a rain-soaked nightmare in the City of Brotherly Love.  In our house, the day began, as Saturdays often do, with Mike and I conversing over a cup of coffee, planning the weekend.  When to work, run errands, exercise, begin packing.  With two essentially unplanned days ahead of us, surely we had more than enough time to accomplish everything we needed to get done, and still have time left over to relax, perhaps watch a movie and enjoy each other’s company.

One of the first things we realized this morning was that we were completely, without question, out of dog food.  This was a first: the emergency dog food run.  OK, so we quickly added that to the list of things that needed to get done.  A few hours later (during which I wrote my previous post), we decided to run out, get some dog food, pick up Mike’s dry cleaning so he’d have a clean shirt for his trial on Monday and maybe grab some lunch.  Little did we know.

The first leg of our journey, during which we shot down to South Philly for the puppy chow, was no problem.  Sure, the winds were so strong that that car was being blown around on the expressway, but we were in and out of the giant pet store in five minutes, and traffic was light.  Then, we made the fatal mistake of turning our car toward Center City.

At 20th and Chestnut, we encountered instant gridlock, and got nowhere fast.  The streets, much to our surprise, were crawling with drunken revelers engaged in a pre-Saint Patrick’s Day pub crawl.  Then, at 17th and Chestnut, the gas tank indicator light came on.  Great.  Stop and go traffic (much more stop than go), and running out of gas. Clearly, there’s a metaphor in there somewhere.

We eventually made it to the dry cleaner, with our collective blood pressure rising.  We abandoned a plan to swing by Mike’s office so he could pick up some trial materials, and began our crawl (a generous description) back to Northern Liberties.  Every intersection was a nightmare, as pedestrians with inside-out umbrellas floated in between the stopped cars.  It seemed quiet likely that we would run out of gas before we made it to the station, and I began mentally preparing myself for the half-mile sprint to Delaware Avenue from Old City, with a soggy pile of cash in my pocket, and then running back to the car, gas can in hand.

By some form of divine intervention, we just made it to the gas station, and instantly my heart lifted.  It was still a vile day, we were both hungry, and we had just spent a torturous hour getting absolutely pummeled by the rain and the traffic, but at least – at the very least! – I didn’t have to make that mad, soaking wet dash to the gas can.  We were back on track, and would make the most of this rotten day yet.

After a very comforting grilled cheese and avocado sandwich and a much-needed bottle of PBC Rowhouse Red, I decided it was time to start tackling some packing.  Moving day is four weeks away, and it seems time to get serious about getting organized.  So down I went to the basement, in search of boxes and the tape gun, only to discover an enormous pool of standing water, seeping out from the middle of the basement floor.

All I wanted was a few lousy cardboard boxes so I could get a little packing done, and suddenly, I was Jennifer Connelly in DARK WATER.  “Why,” I silently cursed. “WHY WHY WHY am I being thwarted at every single turn today?” 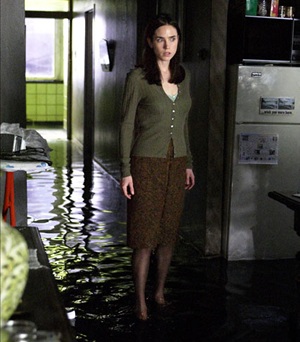 I emerged from the basement with wet socks and my pants covered in dust.  After packing a few boxes of books and bringing up another stash of collapsed boxes from the basement, I said to Mike, “You know, I think this is just one of those days when you have to give in, say ‘Uncle,’ whatever.”  It seemed apparent to me, as I struggled in the corner of the basement to extract the boxes while avoiding falling ass over end into the giant pools of water, that there was some larger force at work today – telling me to relax, to stop moving, to be still.

I guess there was a moment, when I thought I was going to crash into the dryer while I wrestled with the boxes and the surrounding crap, when I felt like pounding my fists on the wall and screaming and crying about how cancer has ruined my life.  But then, somehow, I must have caught myself, taken a breath.  When I realized, this is a ridiculous day.  We have lived in this house for three and a half years and have never once had water in the basement;  now, four weeks from moving, we have a flood.  This is absurd, but this is not cancer’s fault.

I often wonder if other cancer patients and survivors fall prey to this habit – of blaming all forms of misfortune, big and small, on their disease.  It’s something I find myself doing all too often, and I am just glad that today, before I went too far off the rails, I was able to realize that rather than fighting the nonsense unfolding all around me, I was better served by just rolling over and playing dead.  Tomorrow is another day.  The rain will let up, and we’ll try again.

One Response to roll over, play dead