turn on the quiet (or, not so fast, mr. vacuum)

It’s an extremely cool thing to be married to someone who, at critical moments, knows me better than I know myself.

I have this thing since cancer:  I really like being busy.  Running around.  Doing stuff. Multi-tasking.  I spent so long unable to do anything (or so it seemed) that I now relish the feeling that I can do errands, go running, socialize, all in one day, and still have gas left in the tank when it’s all over.  It’s great to feel ALIVE.   I spent seven months sitting at home by myself: why on earth would I choose to do that rather than GO, GO, GO on any given weekend?

Well, this isn’t just any weekend:  it’s my cancerversary weekend.  Yesterday, a miserable, No’reaster-shrouded day, Mike and I hustled over to Collingswood, NJ (for the millionth time, it seems), still searching for our “perfect house.” After a few hours out in the rain, we came home to unwind  – briefly – before heading out to a holiday party hosted by one of Mike’s workmates.  And after that, back to NJ, to christen our good friends’ new home with some build-your-own cannoli and an impromptu jam session featuring guitar, piano, tambourine, bongo and Poma-poo.  It was a delightful, festive evening, in spite of the rain and wet snow, and we arrived back home around midnight feeling lighthearted.  It was a wonderful way to spend the anniversary of my cancer diagnosis, a day that left me smiling, full of the life that is brimming all around me. 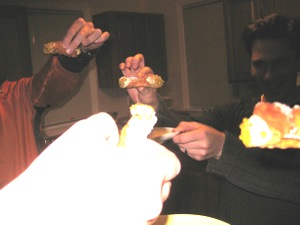 Today – brisk, cold and sunny, finally feeling like winter is coming – was shaping up to be a day full of chores outside the house, looking at more real estate, and the possibility of not having time to take the run outside that I have been looking forward to since I first looked at the forecast for the weekend.  So, just as I was wrestling with our constantly malfunctioning vacuum cleaner, feeling a bit of the PTSD that I always do when operating the thing (details of the connection between my cancer and vacuuming will have to wait), my dear husband said, calmly, “Em, do you think you need a time-out?”  Not because I was acting out, but because even now, even as I have grown into this person who just wants to be constantly DOING, just to remind myself that I CAN, I still – sometimes – benefit from some extended quiet, an opportunity to recharge and reinvigorate my spirit with solitary acts – writing, reading, sipping a cup of tea.

It’s a new thing, a recent thing, to be able to recognize that it’s OK to have limits, to reach a point where I need to rest and be still, and that doing so does not signal a reversion to the person I was during my illness.

So I agreed to let Mike out into the world this early afternoon, to look at a few more pieces of real estate, buy some groceries and replace the dreaded vacuum cleaner whose arrival into our home exactly coincided with my surgery two years ago.  And I agreed to give myself an opportunity to lower my heart rate, have some green tea and gather some energy for the run I will take later this afternoon. 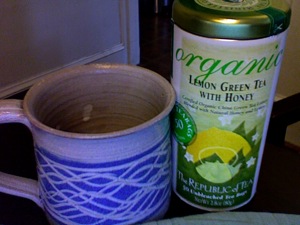 A couple of realizations have thus come out of this anniversary weekend.  The first is that I am finally in a place where I am able to work through social situations, such as the holiday party last night, where I am essentially among strangers, or people who I know only peripherally, and feel happy and confident, and not preoccupied with my identity as a survivor.  I can even graciously accept a comment like, “How are you getting along now,?” as an appropriate expression of concern for my well-being, without being catapulted into a morass of cancer-related post-traumatic stress.

Similarly, when I was over at Philadelphia Runner on Thursday getting my new Pumas, I ran into a law school classmate who I had not seen since I was diagnosed.    He seemed glad to learn that I was getting into running, and asked if I was training for anything in particular.  I hesitated, realizing that this was the moment where I would either tell him about my cancer or not.  In that instant, I could not think of a reason why it was important to share that information.  As Mike said later when I described the encounter, I am more than just someone who had cancer.

After that brief reflection, I just said simply that I was hoping to do a 10K in the spring, to which my acquaintance said, “That’s great,” and we moved seamlessly into talking about out respective jobs.

There it was: an opportunity to realize that cancer can be a part of my life – a critical part, even a defining part – without consuming me, or being something that I am forever obliged to reveal.

Just as importantly, Mike’s deftly handled “intervention” earlier today reminded me that I am entitled to my moments of quiet, and that those moments do not necessarily serve as extensions of the period of isolation which so defined my illness.

Some clouds have rolled in here in the early afternoon, but later on, after the re-charging is complete, I will be thrilled to slip on my new running shoes and hit the pavement.  Happily, I get to do it all now – to exert myself and feel my strength and stamina growing, but also to retreat and be still when needed.  The truth is that all of it, and everything in between, feels fantastic.

A few hours ago, the cancerversary demons finally caught up with me, after I had laced up my sneaks and was getting ready to head out for my first cold-weather run.  It’s hard to describe what exactly brought it on.  But I nominate this beast: 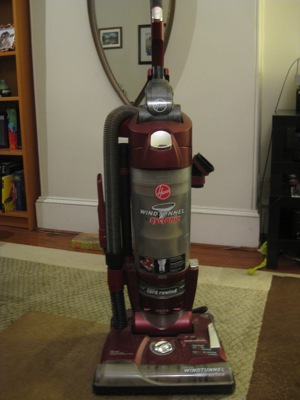 For reasons passing understanding, this vacuum cleaner has become my own personal, inanimate Voldemort.  Later this week, he will be consigned to the basement and be replaced with a vacuum that  – let’s see, I don’t know, WORKS?  But for the time being, he remains an albatross closely connected to my cancerversary, representing both all of the menial things I was unable to do for myself during my illness, as well as the complicated ways in which my cancer affected those closest to me.  So yes, when I spoke to Mike at 3:30 and he told me he was not, in fact, bringing home a new vacuum cleaner, well, I kind of lost it – just a teeny little bit.

In my book, there is nothing wrong with tears, especially at a time like this.  There is especially nothing wrong with them when, for the most part, I am feeling great.  Because in spite of all the good feeling that I have amassed in recent weeks and months, there remains, underneath it all, those same seeds of anger and sadness that used to so dominate my emotional life in the immediate aftermath of cancer.

So I cried while I stretched, and squeezed my eyes tight to try and stop the tears, and seriously thought about pounding my fists into something very hard.

Instead, I bundled up, hooked up my Nike-plus, cranked up the tunes and headed out the door.  About two blocks from my house, feeling a bit wobbly and vertiginous, I thought seriously about heading back.  “You need more time to cry and feel shitty,” I said to myself.  “Just turn around and go home.  Relax.  Give yourself a break.”

But then another voice chimed in: “Screw that.  Keep going.  You’ve been looking forward to this run for days.  You can’t let cancer take this run away from you.  Don’t think about going out tomorrow, or the next day.  Do this now.  Show this stupid fucking disease who’s boss.”

And so I ran on, eventually hitting a great stride, ultimately finishing at a pace under 10 minutes per mile for the first time ever (I think.)  And now, closing in on 6 PM, with a yummy dinner and a quiet night with my honey on the horizon, I am back on top.

It’s good to be here.

One Response to turn on the quiet (or, not so fast, mr. vacuum)