With cancer, unlike a half marathon, there is no finish line.  There is freedom from active disease, but never from the threat that it may one day return.  So the tests and checkups stand as markers on a road that never ends.

A few weeks ago, the lingering impact of cancer literally intruded on my passion for running, and my attendant attempts to leave the disease in my wake.  On a grey Friday morning, after dropping my son at school, I set out for a ten-mile training run, in preparation for an upcoming half marathon.  I’d no idea there was rain in the forecast, and after a few minutes of running through a light mist, I found myself soaked through.  I had barely covered two miles when it was clear the rain would persist and I would be running these ten miles in a steady downpour.

Still, I was delighted, energized by the intensity of the clear sense of BEING ALIVE.  As is often the case when I find myself running in less than ideal conditions, I was bolstered by my own apparent lunacy, and the knowing looks and smiles I shared with the few souls I passed along my route.  These are the moments when my determination is at its strongest. Then, at mile 6.5, my music suddenly stopped and I realized there was a call coming in on my phone.  I recognized the prefix as a Fox Chase number.  Time for some test results, my brain told me.

I stopped under a tree along the path in Knight Park for some pretense of cover, and crouched over into a tight ball to try and shield my phone from the water running all around me.  On the other end was a nurse from my oncologist’s practice, who reported that my CA125 was “normal,” but at 11, was slightly higher than my previous results.  My doctor wanted me to be tested again in three months, rather than the usual year.

For a moment, anxiety and confusion washed over me, mixing with the rain.  “She thinks it’s probably just lab variation, since you had the blood drawn somewhere you haven’t been before, but she just wants to make sure.”  These words made sense to me, but still the uneasiness clung to me.  I needed to shake it off, like a wet dog.

“Sure,” I said, struggling to hear the voice on the other end of the line as the sound of the rain pounding the leaves above me grew seemingly louder and more persistent.  “I’ll just go to the lab at Penn in September.  But…she doesn’t think this is anything to be concerned about, does she?”

I was grasping for something concrete.  I had three and a half miles left to run, and as my question hung in the air, I wasn’t sure I could go on.

“No, no,” the nurse assured me, and repeated the bit about lab variation.  I could tell she was picking up my anxiety.  She managed to end the conversation in a way that left me reassured, and after resuming my playlist and stashing my phone back in my belt, I continued on, out from the cover of the trees, into the steady rain.

Back on the trail, running along Newton Lake, I felt my feet pounding harder and harder on the pavement, my arms pumping with increased vigor.  “Fuck you, cancer,” I think I said out loud.  Every cell in my body screamed with life.  Look at what I am doing, you stupid disease.  You simply cannot stop me. Don’t even try.

Once I was home, and dry, and the endorphins began to wear off, I understood that there was really nothing so alarming or ominous about the phone call, or what the nurse reported.  My results were normal; my pap test had also been normal.  All was fine.  My doctor, as she has always done over the last eight years, is being hyper-vigilant, making sure that, because of my genetic history, nothing is missed, overlooked, or chanced.  For that, I am ever grateful.

But there was no denying the symbolic reality of that call’s timing.  I could have chosen to ignore it, and returned it later when I was home and dry.  Like any good cancer patient, though, I lack the will power to ignore a call that I know is coming from my medical team. So I answered, and let the reality of my illness interrupt my rhythm, and distract me from the myth of my invincibility.  When I am running, feeling my strongest, it often seems there is nothing I cannot do.  That rain-drenched phone call reminded me of the actual fragility of my condition – or, more generally, our condition.

For it is a condition not particular to me, only seeming so because of my history of illness and the genes that threaten my continued health.  The blessing-curse of my illness burdens me with a heightened awareness of this fragility, but also gives me the freedom to live more fully because of it.

Ironically, running the half marathon became about something completely outside of my never-ending battle with my cancer demons.  Over the past year, as I’ve grown stronger, leaner and more confident as a runner, I’ve watched my speed increase, and my half marathon times improve by a significant margin.  Though I knew the conditions on June 14 would be far less hospitable than those on the day in late March when I ran my fastest 13.1 yet, I still harbored this idea that I would push myself as much as I (safely) could, and see if I could at least minimize the toll the weather would take on my performance.

Once again, the universe had something else in mind.  A friend and fellow Students Run leader had just recently suffered a miscarriage, and though she had not trained to her ability, she was determined to run the half marathon.  Though I couldn’t know her precise sadness and struggle, I related to her determination to push her body as a way of moving through her present adversity, so I encouraged her, and offered to run with her, and bolster her as she needed.  I knew her to be a strong runner, and certainly naturally faster than me, but it was impossible to know exactly how hard this race would be for her.

In soul-crushing heat, we stuck together through the hills of Fairmount Park.  We spent the first few miles with a chatty guy who eventually left us in his wake.  Soon after, I came across a long-lost friend from law school, and he temporarily pulled me away from her. Eventually, we fell into a rhythm of dousing each other at the water stations, and telling stories.  I urged smiles out of her when I saw her start to grimace.

As we ran, I felt that I was holding a fair amount of energy in reserve, even in the preposterous heat.  But it never occurred to me to leave her side, and after the first few miles, I completely let go of the idea of making the race about me, or my time.  This was running with a totally different purpose, and it made me feel happier and lighter than I ever had on a course.

The final mile of included a satanic hill, at Lansdowne Avenue, that anyone who runs races in Philadelphia knows and likely despises.  I ran as steadily as I could up the hill, and passed countless people walking.  At the top, I stopped and waited for my friend, and when I saw her coming over the rise, her face set with determination, I felt a lump in my throat and tears begin to well in my eyes.  So many times, I have felt myself as the one running through adversity, or to prove something.  This day, though, I saw those years and miles of struggle in my friend, and I felt the power not only of what I was doing to pull her along, but also the incredible strength she showed in fighting through her own pain. 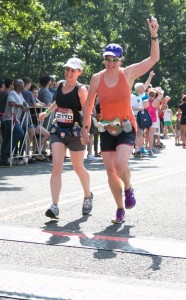 a different kind of PR

A few minutes later, we crossed the finish line together, holding hands, smiling and triumphant.  And in a moment of wonder, I realized that the greatest feeling of accomplishment I’d ever felt crossing a finish line came when I let go of myself, and lent love and energy to another soul in need.

This entry was posted in Life After Cancer, Philadelphia, rain, running. Bookmark the permalink.