Has my license to write about cancer expired?  I’ve been thinking about the countless numbers of young adults who have been diagnosed with cancer since I entered this universe over five years ago.  I’ve mused on the lives lost, the brave people I knew who this rotten disease managed to take down.  I’ve thought about the people I know who have devoted their lives so much more actively and purposefully to the “cause.”  At this point, what does my life have to do with cancer?  Does the crowded world of cancer bloggers require my highly irregular reporting about my “life with cancer,” when I’m perfectly healthy, and when my “life” is really about so many other things at this point?

These are not questions I ask in order to prompt support from people saying, “You have so much great stuff to say.  Always keep writing.”  I ask these questions because with each passing day that I am away from my chosen profession, home raising my son, I wonder what I am doing to be an active and meaningful voice in the world of young adult cancer.  Being the best mother I can to my son doesn’t feel like enough of a transformative gesture; I would have been doing that regardless of my diagnosis.  After all these years, I still feel compelled to be Doing Something, shining some kind of light.  The sense of isolation I felt during my period of diagnosis, treatment and even the early stages of my recovery is something I will never forget.  Once I regained some semblance of physical and emotional stability, I pledged that I would do whatever I could so that other young adults going through similar ordeals would not have to endure that same feeling.

Never mind that it feels somewhat disingenuous to even call my self a “young adult” at this point.  With my diagnosis at age 35, I was already on the outskirts of young adulthood.  Five years later, I have arguably entered mid-life.  Isn’t it time for the old folks to step aside and make way for the next generation of young adult cancer warriors? 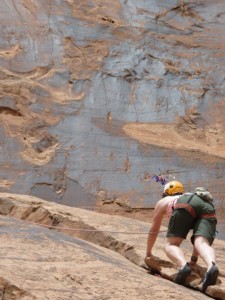 It is no accident that these questions have arisen in the wake of my decision to participate in a First Descents fundraising Climb-a-Thon next month.  Not so very long ago, First Descents felt like the beating heart of my cancer survivorship.  After all, without that remarkable organization, I might never have seen my way out of the post-treatment wilderness.  From August of 2009 to July of 2011, my life seemed in some way measured in intervals between camps.  During that time, it was impossible for me to imagine a time when FD wouldn’t be a constant force in my life, or a time when I would go more than a few months between camps, fundraising events, or athletic challenges taken on under the Team FD mantle.  After kayaking in Montana in 2011, when I decided that my camper days were likely over, I was committed to remaining actively involved with the organization and its spirit.

Parenthood, understandably, changed everything.  Time became a rare and precious commodity.  Priorities shifted, seismically.  Our family’s entire center of gravity changed, and my husband and I both instinctively adapted, making time with and responsibility to our son our chief priority.  The magic and mystery of becoming a parent almost seamlessly reordered our lives.

Last week, when word of a local First Descents fundraiser came through my email, this dormant fire in me began to flicker anew.  It’s been nearly three years since I was climbing in Utah; I shudder to think of the physical struggles I may face when I am on rope at GO VERTICAL in two weeks time.  But the pull was irresistible, so I cleared the time on our family’s weekend calendar and signed up.  I even started plugging the event on social media and scrounging for donations from friends and family who are probably suffering from a bit of charity fatigue.  It felt like I was being reunited with a long-lost friend.

My hope is that when I arrive to climb on March 2, I will encounter a whole new group of fierce young adults who are living with cancer or its aftermath.  Some of them may be half my age.  But rather than feeling like an ex-young adult cancer survivor, I hope to be able to show, just by being there, that life  – fully lived – does indeed go on “after” cancer.  When I sat in my hospital bed after my first surgery and listened to one of my doctors talk about what surveillance might look like YEARS down the road, I cried and shook my head in dismay.  It seemed like an impossibility that would never come.  At the height of my health crisis, the future was meaningless; it couldn’t exist for me.  The life-giving parts of my body had just been cut out of me.  So had cancer, but all I could feel in that moment was the absence of the life I would never be able to create.  At 35, what could the future possibly look like, and would I even live long enough to see it?

But at 40, here I am: Mom to the most beautiful boy in the world; climber, of sorts; fundraiser for the group to which I owe so much of my life after cancer.  Perhaps what’s meaningful is that I am still here to do any of this at all.