My sister-in-law was in for a quick visit this weekend.  It was fabulous to see her and finally be able to share parenting stories.  For the past eight years, we have watched her raise her own children, always feeling a bit like outsiders looking in.  Now we’re all part of the same club.

The afternoon she arrived, she asked me where things stand legally with our adoption process.  I explained that while our son’s birth mother has irrevocably terminated her parental rights, there is an unknown birth father out there, and that his rights can’t be terminated for another two months.  She asked, appropriately enough, if that was causing me anxiety.

“No,” I said firmly.  “There’s an infinitesimal chance that he would ever find this baby, and even less of a chance that he’d have any interest in parenting him.”

“That’s good,” she responded.  “Because that would be a really long time to have that kind of uncertainty and anxiety hanging over you.”

Flash forward to this morning, when I woke from a vivid dream that featured the emergence of our son’s biological grandparents who (quite unrealistically) somehow managed to interfere with his placement and have him put in their care.  The punch line is that the grandparents turned out to be Mitt and Anne Romney (apparently I am as afraid of the Romneys stealing our country as I am of our son’s biological family stealing him from us), but in spite of the humorous twist, the dream was terrifying.  I cried uncontrollably as my son was handed over to this menacing Guy Smiley. 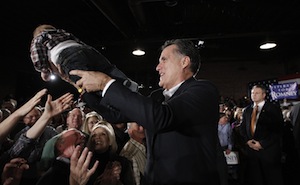 Mitt Romney will never, ever touch my baby

Once I had coffee in hand, I shared my dream on Twitter – my instant therapy and way of acknowledging the fears manifested in my dreams while also trying to quickly put them behind me.

Leave it to one of my fellow adoptive parent friends to call me on the carpet, pointing out in her inimitable way that perhaps my sub-conscious mind is working over-time and I’d be well-served to spend a few waking moments trying to process my anxiety.

So here I am, not entirely sure what I should be doing, other than acknowledging openly to the universe that I am apparently more worried than I realized about something happening to disrupt our adoption, about some unseen hand sweeping in to snatch our son from our arms.

There is undeniable fragility in our circumstance, but isn’t it simply of a flavor unique to being a new adoptive parent?  There are a thousand other ways in which one’s status as a new parent can be threatened.  Yesterday, a woman reached out to me on this blog, and shared her recent diagnosis with advanced ovarian cancer detected during the caesarian birth of her child.  I look back to the moment of my own diagnosis, and the paralyzing fear that gripped me.  I try to imagine that moment coupled with the one I am in now, as a rapt new parent; the result is a truly incomprehensible cognitive and emotional dissonance.  I think of the woman currently caught in the confluence of these earth-shattering emotions, and I want to scream and cry for her.  But I also want to believe that she will endure them, and emerge on the other side as a super-human goddess of unrivalled strength and wisdom, someone who will light the way for the rest of us mere mortals.

I mention this woman’s situation not to minimize the significance of my own anxiety, but rather to recognize the reality that we are all hanging in a kind of delicate balance, whether as new adoptive parents, cancer patients, or something else entirely.  The question is simply how to muster the grace needed to maintain that balance, how to dance with love and hope in our hearts while embracing the fears that lurk unseen.

One Response to mitt romney steals my baby or, adoption anxiety