Two weeks ago, my delicious colonoscopy revealed no evidence suggestive of cancer, but something about my appendix struck my doctor as a bit curious.  In the spirit of hyper-vigilance with which I am now and forever to be monitored – and which I truly appreciate, no matter how disruptive and annoying it can be – she ordered a CT scan.  You know,  “just to make sure.” Never mind that my oncologist told me in July that scans were no longer a part of my check-up regimen.   She just takes care of my lady parts (or the empty place where they used to be);  I now have a a whole other fleet of doctors looking after my bum. 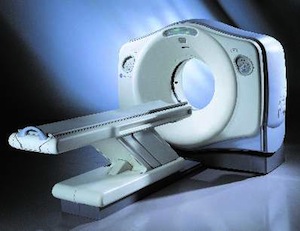 My hospital is a wonderful place full of brilliant doctors, but I spent the better part of the two weeks between my scopes and my CT playing ten different kinds of phone tag with my onc, my GI and my internist.  I just wanted to know:  was the test really necessary?  Didn’t I just have a CT in January?  Haven’t we been through all of this?  With each missed call and voice message from a different person in a different sector of Penn Medicine, my agitation grew.  When I finally spoke directly to my beloved Nurse Sarah at my onc’s office, who told me to just go ahead and have the scan, they’re just exercising “precaution,” I was wound pretty tight, even though I was fairly certain everything was “fine.”

Yesterday, I finally had the scan.  Two weeks had felt like an eternity.  I started my day with a barium smoothie, a not-so-pleasant IV (from which I am still sporting a nasty bruise) and five minutes in the donut.  Penn Radiology, god bless them, is a well-oiled machine, and the whole thing took barely more than an hour.  I was relieved to have it done, but of course didn’t quite recognize the low-level anxiety that lingered as I waited for the call with my results.

In an uncharacteristically speedy turn of events, my GI doctor called this morning to deliver the good news:  my appendix looks great.  Nothing to worry about.  Carry on.

I could feel the smile spreading across my face, the lightness in my heart.  “Perfect…great…thank you…,” I told her.  What I really wanted to do was climb through the phone and hug her.

This month’s good test results (colonoscopy, upper GI, CT scan) will allow me to go into my regularly scheduled four-month check-up at the end of November with a greater peace of mind than usual.  A quick pelvic, some bloodwork, and I’ll see you in 2011.

2011.  Just a few days after my upcoming check-up, I will “celebrate” three whole years since my diagnosis.  It’s hard to believe.  I remember so clearly being in the hospital for one of my last in-patient infusions, talking to one of my favorite resident doctors about what my follow-up regimen would be after I finished treatment.  He started rattling off the intervals, and when he said, “…and after two years…”  I just started crying.  The thought of having cancer two whole years behind me seemed impossible.  I didn’t believe I would make it that far.  It sounded like something from a dream.

But I have made it that far – and farther.  I never for a moment take for granted the miraculous gift I have been given, nor will I ever forget the feeling of vertigo, of being at the brink, that overtook me when I learned of my illness.  It makes the reality of each day now, each new adventure, each achievement, each mile run, that much more precious and sublime.

It was not much past 10 AM when I received my good news today, but when I called Mike and told him,  he said, smilingly, “Let’s drink!”  I told my sister, and her reply was, “Hopefully they’ll leave you alone for awhile now!” Alas, they won’t.  Doctors, scopes, scans, surveillance:  it’s all an essential part of my life now, and it’s never going to change.  A few weeks ago, after my scopes, this reality depressed me.  Now, though, I am taking a different attitude.  For each time I get that call, each time I hear the magic words that “everything looks good,” I have another opportunity to celebrate my health and good fortune.

It’s a twisted blessing, but a blessing nonetheless.

2 Responses to a twisted blessing