My efforts to explain and unpack my cancer experience have always been narrative, linear.  I try to tell a story – or, lots of little stories – clearly, concisely, and in a way that people can connect with and understand.  All I have really done since I started writing about cancer is describe what is happening to me, how my world has changed, how things look to me after facing death and confronting the reality of this virulent disease.

This morning, I woke to a note on Facebook from my dear friend Anne.  My sister, reading my last post, challenged Anne to turn the tags from this blog into poetry.  Anne, never one to shy away from a challenge – especially not an artistic one – almost immediately produced the following:

I love what Anne did because she took the ideas and images that populate my writing, reduced them to their barest essence, and arranged them in a way that painted a vivid, but slightly obscure, picture of my experience.  There is, I realized, after reading those words – my words, actually – assembled in that order, that there is something so powerful about capturing an experience in a more impressionistic, less literal way.  While my inclination tends toward the narrative, and I often rely on stories as a means to teach and demonstrate, something about what Anne did flipped a switch in me, made me think about my cancer more abstractly, and perhaps more universally.

It goes without saying that cancer is great dramatic fodder.  We’ve seen it endlessly in film and television.  We’ve even watched one of my favorite actors, Emma Thompson, battling metastatic ovarian cancer in WIT:

The late, great Lynn Redgrave, who passed away from breast cancer last month, produced in her final months a one-woman show based in part on her own cancer experience.  Perhaps we want to hear people’s cancer stories, whether real or imagined, because it speaks to something so universal – our collective fear of our own mortality, the unpleasant awareness of the ways in which our bodies can seem like ticking time-bombs, waiting to betray us without warning.  Or perhaps we are drawn to these stories because we want to know how we are supposed to behave, or what we will feel like, when it happens to us, or someone we love.  We need someone to tell us how to act. 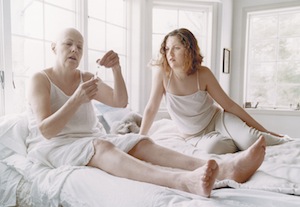 Acting was an integral part of my adolescence and young adult life.  Some of my happiest moments in middle school and high school were on the stage, and my love of the craft sent me to Northwestern, where I originally intended to study theater.  Things change, though, and a life in the theater  – at least not explicitly – was not meant to be for me.

What remains, though, is an intense appreciation for performance in every day life, as well as for the all-too-rare moments when I have the opportunity to sit in a darkened theater – as I did last week – watching artists create another world that I am invited to inhabit for a few hours.  Now, looking back, whether because of Anne’s poem or some other intangible forces acting on me, I see how much performance there was in my cancer.  While I never wore a wig, or painted on eyebrows, there was effort and exertion over those endless months that was, without question, a kind of act.  Acting to mask the panic, pretending to be just another person living without a thought for what lies around the corner, unseen.  Trying to be “in the moment,” when I was afraid that it might be my last.

The world probably doesn’t need another one woman show about dying of cancer, chemo, baldness.  But if it did, I would surely ask Anne to help me with the script.  Perhaps we’d just have a staged reading of poems made up of tags from this blog.  But one thing is for sure.  As long as there are words, as long as cancer continues plaguing my friends and family, as long as I am here, I am going keep searching for better, more meaningful and creative ways to tell the story of a woman who faced death, looked it squarely in the eye, and kept on walking.  And keeps on running.

One Response to performing cancer