Yesterday, I spent a little time in the garden, pulling out the remaining dead growth from last year.  Although I will no longer be tending this garden, I wanted to make sure that all of the living things that are getting ready to burst out of the earth have the best chance for a glorious, colorful and healthy Spring.

This garden was an oasis during my illness, when I spent every possible moment outside, tending to the living things all around me.  It made me feel less dead, less a helpless victim of cancer, to know that I was working to sustain life – and not just my own.

It feels poignant, but also somehow very right, that the time has finally come to say goodbye to this haven, this place where I was so often alone with my thoughts and fears, the place where I struggled to find a flash a beauty, of color, amidst the bleak pallor of cancer.   We are packing up this house, and leaving this soil to the next tenant, and preparing to move on to a wholly new place, a place that is ours entirely, and where cancer has not had a chance to take root.

Almost two years after cancer, preparing to move into the very first home I have ever owned finds me exhilarated and optimistic.  I recognize that after having endured cancer, there is very little that I cannot handle, and the short- term chaos of the next few weeks is just a necessary hiccup as we move into the next chapter of our lives.  It is a story that will always and forever be shaped by cancer, but for the first time since my diagnosis, I can finally feel possibility and promise in the air.

This feeling is especially critical at this moment, the eve of my three-month check-up. Having just received the news that my CT scan from January was clean and clear, this time around I am somewhat less irrationally afraid of hearing that my cancer has returned.   Still, it’s never something to look forward to.  Fortunately, this weekend  has provided an early taste of Spring and summer, so I feel ready to face the stirrups, the scale and all of the other minor forms of unpleasantness that await me.  Rain will fall tomorrow, but my heart will be filled with the sunshine I’ve been able to absorb these past few days.

Yesterday, I ran my first real 5K “race.”  I did it with Mike at my side, on unfamiliar roads near our new neighborhood and finished with a personal best time.  It was thrilling and energizing, and left me so invigorated that I was determined to run again this morning (even though I never run on consecutive days.)  I went out at 9 AM, and logged 5.79 miles.  Each day, each run, is another small triumph as I seek to prove to myself that my body belongs to me, not to cancer.

I was a little nervous before the race yesterday, and shared my anxiety with Mike.  I imagined all of the hard-core runners with their 0% bod fat logging their 4 minute miles, finishing the whole course in fifteen minutes.  I saw myself through their eyes – fat, slow, out of shape, thinking, “What is SHE doing here?”  But as Mike reminded me as we drove toward Haddonfield, those people don’t know what I have been through. And the only person I am competing against is me.  Which is exactly what I did, and exactly why it felt so good to know that I had run my best time.

Then last night, after a long, wonderfully productive day (we did a good bit of packing in addition to running and buying the obligatory case of beer to help us through the next few weeks), we sat down to watch our one TV show (CAPRICA.)  But before we cued it up, Mike unexpectedly started running some of the videos which we made during the course of my treatment.  I had watched them all at the time they were made, but haven’t often looked back at them.  It was startling then, to see myself in the final video, from June of 2008, after four months of chemo, and realize how ghostly, how poured out I looked.  I look at my self now, and see my strength –  and my wild hair – and I don’t see a trace of the shell that I became during treatment.  To look back like that, though, is an invaluable exercise.  It re-enforces, in such a stark way, the insanity of what I went through, and the miracle of the journey back. 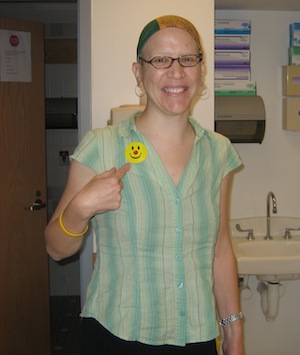 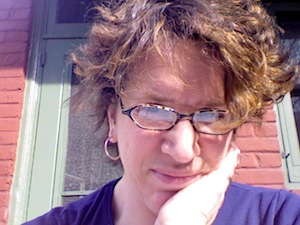 Earlier this week, at the dog park, on a day with a faint chill in the air, I spotted a young woman with a baseball cap covering her bald head and a scarf tied around her neck. She wore a yellow sweatshirt which hung loosely on her slight frame.  She smiled and played with her dog, but there was no doubt from her appearance what she was going through.  Beyond her baldness, and her slender build, I saw in her eyes, in the brief moment we exchanged a glance, the sadness and fatigue that comes only from facing cancer.  I wanted, in an alternate universe, to approach her and say something -anything – to let her know that I understood.  But then I remembered how I felt when I was her – bald, weak, with the eyes of the neighborhood always on me  – and I thought better of it.

If I could have, I would have told her that the nightmare will end, that one day she will know strength, and health, and that she will once again be able to feel the possibility and promise all around her.