HAPPY BIRTHDAY TO ME: UPSIDE DOWN IN THE AGE OF TRUMP

It’s harder than I thought it would be to write about gifts and gratitude, in the face of this creeping darkness, this foul energy that seems to have tainted everything. Today, I am celebrating the day of my birth – and the continued, awesome fact of still being alive – with, among other things, abstaining from news consumption. I need this shit out of my head for Just One Day. But still, here I sit, and I can’t. I am trying to write about what is beautiful, and it just feels like an exercise in shutting out all that is hideous and borne of hate.

For the past few days, I have been haunted by an interview I heard on Monday morning. The interviewee was John Gartner, a psychologist who has taken up the cause of diagnosing Trump with “malignant narcissism,” and crusading to have him removed from office because of his unfitness to serve due to his mental illness. Gartner stated, with 100% certainty, that Trump will end up killing millions of people as a result of his psychiatric disorder. If only, Gartner screams from the mountain top, the mental health professionals who saw this coming had been permitted to speak up during the election. He and his allies could have saved the world from the certain destruction that is approaching.  As if the people who support this madman would have heeded the warning.  As if undiluted, unshakable hate isn’t at the heart of this revolution.

Here’s to nuclear annihilation on the Monday morning of my birthday week.

Almost more than the substance of what he way saying, Gartner’s tone and delivery horrified me. His interviewer and co-interviewee were both women, and he spoke to them with such a mansplaining, enraged condescension that he sounded not that different from Trump himself. What, I cried to myself, has this wretched, hateful man done to all of us?

My walks through the streets of Center City Philadelphia each day have turned into a relentless reel of damaged and discarded souls, the life literally drained out of them. The homeless, the mentally ill, the addicted. Their suffering feels heightened, an assault on my soul. I blame this man. Worse, I sorrow for this country. For all of us, for the nightmarish turn the American dream has taken, though we should have seen it coming. Now, it feels like it has been inevitable for so long, like Obama was really just a hiccup of hope along a pre-determined trajectory of hate.

Even my ability to be swept up in the magic and electricity of two magnificent U2 shows earlier this summer was tainted. The band’s rhetoric of inclusion felt false, polluted. And the turmoil we are living through actually made me angry at my beloved heroes, Bono, especially, who’s musings on the “America is an idea, not a country,” now just feel hollow and wrong. I’m angry at him for thinking he can Dr. Feelgood us out of this abyss. They, as “guests in this country,” can turn and run home to their Emerald Isle. We, their American audience, are trapped in the torment of a today that feels endless.

So, for all of these reasons and more, today, MY day, I have tuned out (except, perhaps, for the purging happening here.) I practiced yoga with my most beloved teacher, who, with the power of his words alone, guided me up into my first-ever unsupported handstand. I breathed oceans of breath, with the sweat pouring off of me, and allowed myself the time and space to remember the miracle of still being in this body. Forty-five years in, and I am still changing, growing stronger and more determined. There is fight and focus in me that knows no limit. Being upside down in that moment, I remembered all of those essential things. 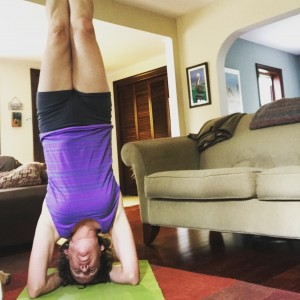 Maybe upside down is the answer

Is that the way out? Is that the way we fight what is happening all around us? We cannot find ourselves in a sodden heap at the end of each day, mystified and mortified, shame-filled before the rest of the world. This cannot stand.

Resist. We have been told to resist, over and over again. BUT HOW? It feels impossible.

But it can’t be. I won’t let my son experience the world this way. I want to him experience it upside down, jubilant and joyful. I have taken this day for myself, to look inside, to remember the wonder that lives there. With my hands pressing hard against the studio floor, and my feet flying over my head, I think I found it. Next, I will turn it around, and give it back to the world. Please join me. Maybe together, we can make the world we see in our hearts a reality.

This entry was posted in Life After Cancer, Philadelphia, yoga. Bookmark the permalink.

One Response to HAPPY BIRTHDAY TO ME: UPSIDE DOWN IN THE AGE OF TRUMP