until the end of the world

From the universal and far-reaching, to the personal, the claustrophobic; such was the journey of the past seven days. One week ago, I sat down to release thoughts that I didn’t even know had been gathering; I shared them with the world, and to a greater extent than usually happens, the world answered back (at least my smaller corner of it) with warmth and compassion and connection. Virtual hugs and “amens” and other cries of common understanding spilled forth, and I felt buoyed, like writing has some meaning, and can serve a larger purpose. It’s a truth I know, which rests at the center of who I am, but which often gets lost in the shuffle, or shadowed in doubt. Cries of self-indulgence and vainglory. But one week ago, the power of words surged through me. I felt like my best possible self.

The next day, the world collapsed in on itself. In the grander scheme of things, the challenges were minor, seemingly not worth mentioning. My son was diagnosed with a mild case of hand, foot and mouth virus; I came down with a head cold. Contagious but not really feeling sick, my rampaging almost four year old was consigned to spend one of his usual school days at home – with me, of course, as congestion clogged my mind, a cough rattled my throat and a low fever simmered – just enough to make me feel depleted, not up to the usual tasks of parenting my wild boy.

The minutes passed like years; the days like eons of unspeakable tedium and exhaustion. The horrible wonders of climate change allowed us a fair amount of time outside, raking leaves, walking the dog, going to the playground. But our routine had been capsized, close social contact was prohibited, and by the end of our third straight day together without reprieve, I found myself a weeping mess over a maudlin dinner of Trader Joe’s chicken pot pie, as my son angrily demanded that I read him “Anansi Goes Fishing” for the hundredth time that day. I was defeated.

“I can’t,” I blubbered, tears falling onto my dinner plate as he waved the book in my face. I meant it in some larger existential way than my highly-attuned four year old could understand. I literally could not do anything in that moment. All of my efforts as a parent, all the love I have poured into my child – none of it was enough. He and I were adrift, lost in isolation while his virus ran its course, without so much as a nap in the middle of the day to spell some kind of relief.

A few days confined with a contagious four year old, while I battled my own mild ailments, cannot compare to the seventh months I spent isolated in my home during cancer treatment. But the flavor is similar enough, the feeling of disconnection reminiscent of those endless bleak days, such that on top of the other battles I was fighting – with my son, with my own absurd head cold – I was left to once again fight off the fear that I will never completely be free of that cage that surrounded me, long years ago that still feel like yesterday.

In the midst of the dark week that was, I also learned that I was not to be hired for a part-time legal writing job that I found myself interviewing for completely out of the blue, the week prior. On a Wednesday morning when I would normally roll out of bed and pull on my yoga clothes before heading to class after dropping Earl at school, I instead pulled on stockings and a dress and hopped on the train. I walked into the beautiful office of one the city’s most successful plaintiff’s personal injury attorneys, and had a very congenial – almost enjoyable – conversation with him and one of his associates, and talked about their needs, my skills, and the time I had available to help with their massive overflow of legal writing. It’s work I’ve not done before, but I’d been feeling the urge to engage my mind a bit more fully, to perhaps even use some of my dormant legal skills, so when I learned of the opportunity, I decided to give it a shot. My husband cheered me on, and I approached the meeting without the usual nerves and insecurity that marked almost every other job interview I’d ever been on.

I left the meeting feeling excited but scared – wondering how I would manage my time if they actually hired me, worrying that I would struggle to navigate an unfamiliar practice area. But more than anything, I was proud of myself for taking this first plunge back into the possibility of the work world. I told myself that either outcome would be perfectly acceptable. I had nothing to lose.

A week passed, and I didn’t hear from the office. I began to consider the possibility that they might not contact me at all; I became quite certain that either way, they were not going to offer me the job. So when the email came last Thursday – after almost three grueling days with my son – I was unsurprised. But in the irrational trap of my isolation, it smarted anyway. The explanation given was that the firm had hired a full-time attorney; they were concerned that the time I had available wouldn’t be sufficient for their needs. Fair enough.

My son returned to school, mercifully, on that Friday. Despite the tears and rage, we both survived, and once free that morning, I laced up, despite my lingering cold, and pounded out six miles that felt completely essential. Along those miles, I was free to consider, for the first time, in what felt like an eternity, this notion of my time. The time that I do have, for myself, for my son, for the world I want to make better, for the people with whom I want to connect.

At the end of my run, I came across my neighbor around the corner – a new friend, the mother of two boys , one just about Earl’s age, and it turns out (not by coincidence, because I no longer believe there is such a thing), also a writer. We are slowly getting to know each other, in that unique way one does when building a friendship as a full-blown “adult.” While our boys play (and fight) we have found small spaces in which to connect.

We talked at the sidewalk’s edge, her boys packed into their coach, bundled up despite the unsettling December warmth (she, like me, finds these temperatures frightful and disturbing), and laughed at our shared frustrations with our boys. I told her of the week that was; her sympathy was such a comfort. As we parted, I told her that I’d read her recent post about recommitting to her writing. She has committed to finding space to write 150 words a day; her commitment has shined a bright light on what matters to me. She is inspiring me.

One night last week, in the midst of the struggle, I dreamed about participating in a spelling bee of sorts (inspired, no doubt, by endless readings of Jon Muth’s gorgeous children’s book, “Zen Ties.”) Like so many dreams, it was more about a feeling than actual events – in this instance, the fact of the spelling bee seemed simply a vehicle for this euphoric relationship with WORDS. There was no actual spelling in the dream (how well would I do, anyway?) There was just this ecstatic sense that I am about words.

Connecting with other people who are also about words, who are committed to the arduous and inward work of writing, has given me a kind of permission that I’ve heretofore felt I was lacking. My sweet friend in California, bought back into my orbit thanks to the wonder that was our high school reunion, shines another light on what matters to me. Her words are constantly flying through space, across miles, burrowing right into my heart. Her passion to find meaning through words has reignited my desire to do the same.

But: time. It is finite, in more ways than one. Have I lurched into middle age without even realizing it? Have I wasted endless hours and days with errands, laundry, household nonsense, hours that I could have devoted to discipline, to words?

I went to bed last night with a commitment to start anew, to seek focus, to try on some of the discipline that my two friends – one very near, one a continent away – are inspiring in me. Last week is gone; we have come out on the other side. It’s time to begin again. I will not waste the time I have been given – in the moments right before me, or in the days and weeks and years that may stretch ahead. 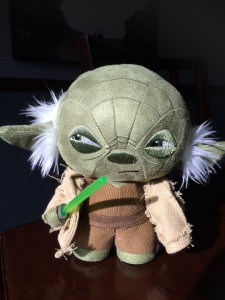 So today I woke in darkness, to run, to allow myself time later in the day – the few precious hours I have while my son is at school – to take refuge in words. This December morning, thick with fog, air heavy with humidity, felt peculiar, almost apocalyptic, but also right. Shorts and short sleeves with my running shoes; Christmas lights shrouded in mist. Everything seeming upside and confused, except my purpose. Run. Find space. Make time.

When we find ourselves in full-on battle mode with our boy – when his irrationality soars off the charts and he seems utterly out of reach – my husband talks about “losing the will to live.” He says it half-jokingly, but there is an essential truth to it, the feeling that the struggle is simply too much. Last week was like that, for days on end.

But in the fog this morning, something beautiful threatened to emerge out of the obscurity. It’s possible to pass through these challenges, these weeks filled with tears – or those long-ago months, trapped in a house, warding off disease, clinging to life. With support and inspiration, life can be reshaped, re-imagined. We do not have to be swallowed whole by any one thing that happens to us, by any one part of our identity. The will to live is more powerful than we know.

This entry was posted in Life After Cancer, running, Writing. Bookmark the permalink.