In an ironic twist, the morning that Hurricane Sandy began pounding the East Coast, I was scheduled for my regular oncology check-up, my first exam and round of blood work since my recurrence scare over the summer.  Only three months have passed since a colposcopy yielded negative biopsy results and I was able to exhale fully after a nervous July; logically, I have no reason to worry.  Then again, the occasion of a check-up is always reason to worry.

But on Sunday evening, my anxiety about my PAP test and CA125 was quickly eclipsed by anxiety about the approaching storm, which threatened the entire Eastern seaboard, with a particular eye on my home state of New Jersey.  The Monday morning forecast remained murky, and I tried to convince myself I’d be able to make it to West Philly and back before the brunt of the storm hit.  But as news of schools and courts closing and public transit shutdowns spread, it became clear that there was no way I could safely travel even the ten-plus miles to Penn.  I’d have to hunker down at home with hubby, son and pets, and reschedule my check-up.

I left a message with my oncologist’s answering service late Sunday night; we woke in the morning to the first stirrings of whipping wind and pelting rain.  First thing, I made a failed attempt to reschedule my appointment, but by the time I got through to the schedulers, they were preparing to close the practice for the day in anticipation of the worsening conditions.  I’d need to wait until Wednesday, when I could talk directly to my doctor’s scheduler, who could try to squeeze me in sooner. 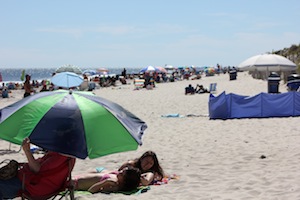 For the first part of that surreal Monday, as the coastline 50 miles from my front door was ravaged and the streets of our beloved Long Beach Island flooded, I perseverated on the need to reschedule my appointment, to make sure that my three-month check-up (“the scare” had put me back on a three-month cycle, after what seemed an eternity of enjoying 6 month intervals between visits) occurred within this tight little window of time.  A day or a week too late, I felt, and some malignancy would have a chance to take root in some dark corner of my body, and that would be it.  For a long time, I wondered what my life would be like if my cancer had been caught earlier; what part of my nightmare would I have been spared?  And so I still take comfort in the rigor and regularity of my surveillance schedule, and tell myself that even in the event that something suspicious does emerge, my doctors and I will have the upper hand.  Disrupting my regimen, so entrenched over the last five years, felt like Russian roulette.

But as the news of the impact of Sandy’s wrath grew increasingly grim, my obsession changed – from my postponed checkup to the freakish destruction, occurring, it seemed, all around me.  Paranoid fantasies were quickly hatched – of the roof being torn off our house, water rising all the way to our first floor, the enormous tree in our back deck snapping in half and crushing us all.  One way or the other – be it cancer recurrence or hurricane – the end felt near.

My husband urged me to breathe deeply and enjoy the extra time we were having together with our son, whose obliviousness to the situation and delight in having both of his parents to play with was a welcome balm to my frayed nerves.  Eventually, I did just that.  We made cookies, and played and laughed together, and by early evening, realizing that we’d survived the entire day without losing power or being crushed by falling trees, I was in fact able to breathe more easily.

After dinner, with Earl peacefully asleep, I turned to social media outlets for updates on the storm’s progress.  Wind and rain continued to batter our house, but there was little water in the basement, and though the lights flickered intermittently, our power was in tact.   We were, strangely, fine, when so much of our state was being destroyed.  I started seeing pictures of Long Beach Island, where we were married in 2003, and my heart nearly stopped.  All the talk during the day had been of Atlantic City, where the storm made landfall.  But just to the north of Atlantic City, “our island,” sight of so many lazy summer weekends as well as our wedding (which was marked by its own storm) was all but obliterated.  After a day of shattered nerves, it was almost more than my heart could bear. 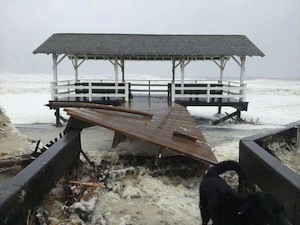 As I obsessively checked Twitter for updates on LBI (and New York City, whose condition also horrified me, but whose resilience and resources assure me that she will be just fine), I came across this tweet, from New York Times writer David Carr: “We are all powerless as a general rule, Sandy is just an acute reminder.”  Yes, I wanted to scream.  Yes, yes, yes.

The mind-blowing scale of Sandy and the devastation she has caused leave us all humbled.  But what terrifies us most, I think, is that she teaches us the same lesson that cancer taught me five years ago: something terrible is happening, and there is nothing you can do to stop it.

Something terrible has happened.  But we must keep going.

One Response to powerless