I am constantly running up against the thought that it’s time to stop this exercise, that my story is stale.  That it’s time to step aside and let some other young adult with cancer shout to the world – as if there were a finite number of ears to listen to us, a limited amount of psychic space for us all to share.  I mean, a few weeks ago when I visited my primary doctor’s office for a refill on my anti-depressant and to pick up referrals for my upcoming GI scopes, the attending said, “To look at you, you’d never know you were a patient.  That’s how it should be.”  I’m a healthy person.  Isn’t it time for me to stop writing about being sick?

Each day, as I look around me, I see things that I aspire to, that I want to be:  a stronger, more versatile yogi; a mother; a published author; a marathoner; a master gardener.  There is inspiration everywhere; there is so much to do.  There are so many angles to this story, so many chapters yet to be written.

What I don’t see when I look around me is acknowledgement of my experience as a young adult who has survived cancer.  Sure, in my confined universe of First Descents and Planet Cancer friends, I see myself reflected and honored.  But beyond that, in the world at large, not so much.  It’s this lingering sense of invisibility that keeps driving me to try and figure out how to explain my story to those who haven’t lived it, how to tell the whole of it.

With that in mind, I eagerly went to see “50/50” yesterday afternoon, with a survivor friend (and adoptive mother: how grateful am I to have her in my life?)  My pocket-pack of tissues at the ready, I sat down in the darkened theater fully expecting to see some significant part of my experience as a young adult facing cancer reflected on the screen.  But despite some truthful moments, for the most part, it never happened.

I accept and understand that every person’s experience with cancer is unique, but there was a universality that I longed to see on the big screen, depicted in a way that would hopefully make people who’ve never been through it understand the hell we have endured.  I can’t know what the film’s story looked like to someone who has never been diagnosed with cancer.  To me, as a survivor, it was lacking some essential part of our reality.

Maybe a protagonist who actually looked like shit as he went through treatment would have helped.  Joseph Gordon Levitt never appeared gaunt; his skin never took on that unmistakable chemo hue.  He looked like a healthy guy who shaved his head. 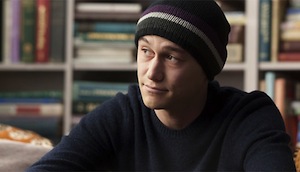 what's with the eyebrows? (as in, why does he have them?)

Maybe more than one scene depicting the emotional devastation of his diagnosis would have left me feeling like, Yeah, that’s it.  That’s the relentless pall that hangs over you when you’re in the middle of treatment, wondering if you’ll live or die.

Maybe if the film hadn’t shown Adam clinging to his mother as the anesthesiologist administered his drugs, and then breaking down as he’s wheeled into surgery.  Maybe if instead, they’d showed him all alone, facing a seemingly endless succession of doctors explaining things and asking him to sign forms while his mind, though blank, reeled with the reality that he was staring death in the face, I would have thought, Yup, been there.

I did experience that chill of recognition seeing the aerial shot of Adam being hoisted off of the gurney and onto the operating table; I did cringe as he vomited violently the night after his first round of chemo.  And I certainly laughed out loud many, many times, at the inept and absurd things that the people surrounding Adam did while they grappled with their own fears and demons.

But over-all, at the end of two hours, I felt like there was something vital missing from what the film portrayed.  Yes, it’s largely a comedy, and actually, in its humor, I thought the film and its gifted actors were quite successful.  But in its attempts to show the dark side – the REAL dark side, not some sanitized, palatable Hollywood version of the dark side – it certainly disappointed.

In the end, I’m not so interested in the reasons why “50/50” failed to achieve what I hoped it would.  What’s important, I guess, is why I wanted it to succeed in the ways that I had imagined.

Why do I need the world to understand what I went through – the suffering I endured, the indignities of treatment, the fear of facing death?  I’m almost four years out from my diagnosis; why does it matter?  At least in this instance, someone was trying to tell a story that was resonant in some basic ways with my own.  Do I appreciate that?  Absolutely?  Is it enough?  No, it’s not.

I guess the truth is that my own “alienation phase” has perhaps lasted much longer than I realized.  The feeling of invisibility lingers.

Each day, I have to push back against it.  Today, I had to directly confront my on-going inability to publicly celebrate a dear friend’s coming baby.  (Will I ever, ever get over it?)  Fortunately, there are those (including my friend) who understand, who are brimming with compassion.  But it feels like an endless cycle that I will be forced to repeat, a sense of different-ness that I will be unable to shake, at least until our own baby comes, and probably for much longer after that.

Today, too, I had to bristle, when I heard someone refer to a “real mother.”  As I wait to parent through adoption, the invisibility of my experience as a survivor is compounded by that of my childlessness.  No one can see the void that exists – where the person I was before my illness dwells, along with the child for whom I am waiting.

The good news is, I am getting better at all of it, through trial and error.  I am stumbling my way into defining my new reality honestly, truthfully.  I am working to embrace all of the wretched stuff that brought me to this moment that is so explosive, so full of promise, without having it drag me down, or hold me back.

I am working on telling the whole story.

9 Responses to the whole story: thoughts inspired by “50/50”