When a dream comes true after cancer, it carries a certain extra heft.  It need not be a dream of life-altering magnitude, like having a child.  It can be something much smaller, even seemingly trivial, like getting up close with the rock ‘n’ roll band you have loved your entire life – the life that was, at one point not so long ago, very much in the balance.

Yesterday, for me, was the fulfillment of that dream. After 26 years of U2 concerts viewed from around the back or near the rafters – any way other than in immediate proximity to the band  – I finally had the chance to go hard-core, camping out on a sun-drenched blacktop for 12 hours, before spending another 3-plus hours packed into general admission space, where I ultimately stood, with friends old and new, just feet away from my adorable, absurd and devoted heroes – a singular moment that had to be believed to be seen.

Cancer teaches many of us a familiar lesson: when faced with a freakish challenge, you say yes.  Do the thing that is outrageous, a little risky.  Why not?  You might be dead tomorrow.  You were almost dead yesterday.  Let’s do this right.

Luckily, my chemo and menopause-induced heat sensitivity has pretty much abated by now.  Even a year ago, I doubt I would have had the wherewithal to do what I did yesterday.  Also, luckily, I have gotten myself into the best physical shape of my life, and have (at least mentally) vanquished the neuropathic plague in my feet.  In my recently-retired running shoes (with their (RED) laces), I was rock-steady all day.  Strong legs, too, and an even stronger mind.  Endurance – my new middle name.  I was up for it.

But it wasn’t just my willingness to do something crazy, or my physical fortitude, that made yesterday happen.  It was also my new-found willingness, borne of my cancer fight, to open my heart to new people, to welcome them into my life – whether for a few hours sitting in the GA queue, or hopefully for many years to come.  Since emerging from the darkness two years ago, particularly since returning from my inaugural First Descents camp in Wyoming, this fearlessness has been an essential component of my rehabilitation, of my ability to build a life enriched by love and compassion and communication. 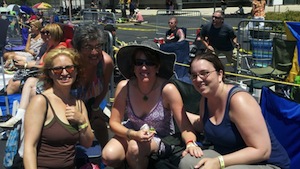 In the queue with friends old and new.

Through the magic of social media, just a week before the show, I connected with a pair of sisters who share my obsessive love of U2, and who, even from a virtual distance, I sensed were somehow kindred spirits on an even deeper level.  Arriving at the stadium yesterday morning at 5:45, I spotted them immediately, and hooked into a connection that grew over the course of our long, hot, dull (but occasionally quite dramatic!) wait in the queue, and which, by the time the lights came up just before midnight, I was certain was just beginning. 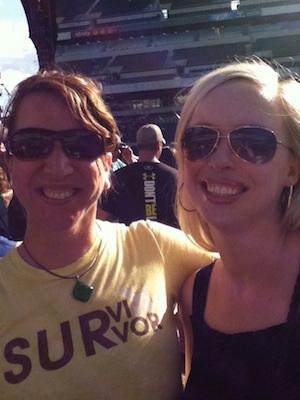 Also along for the insane ride, and just as vital to the magic, were my oldest and dearest friend (who knew me back in the days of my first U2 concert, when we were all of 12, and in the seventh grade), and another brave cancer warrior whose quiet exterior masks a steely determination.  They, too, buoyed me, compounding the joy, steadying me as I stumbled, bleary-eyed, through night’s end.

And then there is this band, this music that reached right into my chest and grabbed my heart as I stood on the cusp of adolescence, and hasn’t let go ever since.  There is this transcendence, this inarticulable bliss that has always washed over me at a U2 show.  I know Professor Bono wants to give us all a crash course on human rights violations and third world debt, and his intelligence and passion are commendable.  I will read his Op-Ed pieces in the New York Times (and sometimes snicker a bit, I admit), and I get all the ONE campaign emails.  But truth be told, when I am in the middle of their sound, my mind is unplugged, and my heart is in over-drive.  I doubt I could ever explain what it is, or why it happens.  But it is a feeling that I have known virtually my entire life, and the rush of it is a shot to the soul like nothing else. 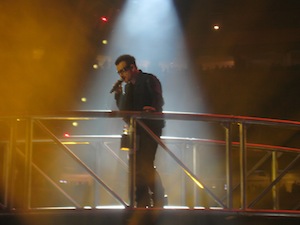 Up close, feet away from these mere humans who have nurtured this ineffable magic for all of these years, there was a realness, and immediacy, that I could never before access.  Bono, up close, is a stocky fighter, singing like a true artist, devoted to the power of melody, to the emotion in every vocal moment – from the crystal clear and resounding, to the incomprehensible yet heart-stopping.  He works his ass off, and knows the flip side of the incredible feeling I describe here.  He may not be its lone architect, but he is its main and master communicator.

Together, these four musicians pull off a synergy nothing short of mystifying, and the fact that I lived to bask in its white-hot epicenter for a few short hours is nothing short of a miracle.

One Response to believed, seen: a dream comes true