I want to talk about my friend Chris, who died earlier this week.  She and I connected early on in my days on Planet Cancer; she was newly diagnosed with Stage IV metastatic colon cancer when I was undergoing treatment for Stage III ovarian.  We eventually realized that we were both Northwestern alum; Chris graduated with a degree in theater, the same program I entered, but from which I quickly fled.  Her ingenuity  – which I came to admire as one of her many amazing qualities – led her to transform her inevitable experience waiting tables into an encyclopedic knowledge of wine, and ultimately to start her own wine business.  Chris continued acting and working as an artist when she was able, but always had a keen practical eye.  She had stayed in Chicago after graduating from NU in 1992 (two years ahead of me), and by all lights was a part of a large and loving community, in both her artistic and business ventures.  She also had a wonderful and devoted partner in her husband, Marc.

In August 2008, several months into our on-line friendship, I went to Chicago with my husband and parents for my first post-chemo vacation.  When I told Chris I was coming, she eagerly insisted that we get together, which we did one hot, sunny afternoon before a Cubs game.  We exchanged text messages in advance of our meeting:  “I’ll be the one at the bar with the duck fuzz hair”; “I’ll be the one with the chemo fanny pack.” 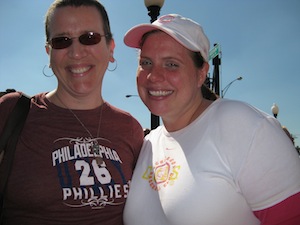 Getting to know Chris in the virtual world, I was always astounded by her wit, her pragmatism, her intensely passionate reactions to everything happening to and around her.  Her humor was ferocious;  it amazed me that someone battling Stage IV colon cancer could find comedy at every single turn.  To the limited extent that I knew Chris, this seemed to me perhaps the greatest weapon in her arsenal.  I’d always thought I’d had a vibrant sense of humor, but I felt cancer slowly drain it out of me.  When I would post dark thoughts on Planet Cancer, Chris would always buck me up with a light-hearted crack, while also cheering me on and encouraging me to stay strong.  She understood the horror of cancer as well as anyone, but she was never bitter.  She had a way of expressing anger without self-pity.  Though I never knew her before cancer, I don’t doubt that her many remarkable assets as a human being made her the force of light, strength and levity that she was for so many other young adult cancer patients and survivors.

The few hours that my husband and I spent with Chris, sharing beers and burgers in a Wrigleyville bar, made a lasting, searing impression on me.  When we finally met in person, I was taking my first tentative steps on my journey back to life.  Her path was far less clear; though she was due to finish chemo in November of 2008, her long-term prognosis was uncertain.  She’d had metastases to major organs upon diagnosis.  But to sit with her and laugh and share stories with her, you would never know it.  She was ebullient, full of life, regardless of what was happening inside of her.  She invented cocktails called things like Fred the Hot Tranny Mess.

I kept in touch with Chris intermittently over the months and years that followed.  I watched from a distance as she travelled with her husband, and also as she underwent surgeries and clinical trials.  I read her blogs and followed her story on Facebook and Twitter.  I was especially amazed as she performed in two shows during her final year – enduring long rehearsals and pre-show jitters, all while undergoing treatment. Ultimately, a few months ago, I noticed that she had stopped sharing herself on-line.  I worried, of course, and reached out to her through text messages.  Sometime in early November, I heard back from her, thanking me for my good wishes, telling me that she really needed them.  At that point it seemed clear she was near the end.

Toward the end of a wonderful holiday with my family in New Hampshire, I checked Facebook and saw the inevitable post from Chris’ husband, saying that she had died peacefully the Monday after Christmas.  I blinked my eyes in disbelief, feeling a wave of denial rush through my mind:  No, I thought.  That’s not right.  But it was;  she was gone.

In the days since learning of Chris’ death, I have been battling.  I am thinking of her, remembering little comments she would leave me on Facebook and Planet Cancer. Yesterday, out buying champagne for New Year’s, I imagined her words in my head, sharing her love of wine.  New Year’s Day, I’ll be breaking in my new slow cooker, and as the smell of braised short ribs fills the air, I will think about her endless love affair with food.  I will recall her smart-ass ideas for cancer-themed t-shirts.  Maybe I’ll even visit Cafe Press and make myself one that says, “TUMOR ASSASSIN” – always a favorite of hers. 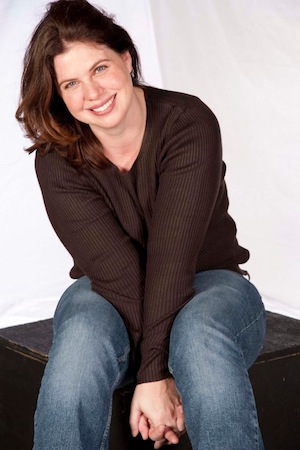 I am one survivor in a sea of countless young adults who are struggling to rebuild their lives after cancer.  Chris Blumer is one more fallen angel.  In the wake of her death, I reconnected with several other long-lost friends from Planet Cancer, and I’m heartened by the way we have all managed to comfort each other in this dark moment.  One woman related how people have said to her, “Why are you still hanging out with sick people?”  As if people won’t keep dying if we choose to ignore the reality.  We stay together because it’s the only way we know how to keep going.

There are countless people grieving for Chris.  Most of them, like me, have probably been wondering how best to honor her, how to keep moving forward.  The survivors among us are raging at the untimely death of yet another brave and beautiful soul, another fellow warrior bested by this wretched disease.

After Chris died, a survivor friend pointed me back to Chris’ own words from earlier this year, as we contemplated what seemed to be the impending death of one of our compatriots.  In a comment here, she wrote these words:

Here’s the thing: the best way to help is live it up like there truly is no tomorrow. Dance for those who can’t and drink in their honor. When my time comes, I hope all of my survivors, formerly tumorous or not, celebrate my life by living their own in a big fat way.

Chris, even after you’ve gone, you’re still showing us the way.  I’ll be sure to mix up some Freds in your honor.