Three days ago, I unpacked from a week in Moab, Utah with First Descents.  Tonight, I should be packing again, but instead I am sitting in my pajamas, fumbling with words.  It’s overdue.  It’s late, and I am tired. Back to the airport first thing in the morning.  But I owe it to everyone. 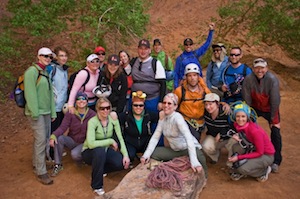 There will be hundreds more words, at least, after these.  But I have to start somewhere.  Re-entering felt a bit more  seamless this time.  My life has been chaos for the entire month of April.  Moving house.  Climbing rocks.  Heading home to New Orleans.  Somewhere in there, I still have a job, a marriage, pets and legs that really want to run.  I picture myself running along the Mississippi tomorrow evening before dinner, and my heart aches with happiness.  There is something so essential in New Orleans, something that I am about to plunge head first into, and I am ecstatic.

But first.  First.  First Descents.  What happened?  Then, now?  What is this cycle that I am caught in?  The best I can do in this instant is try to measure time.

Eight months ago, camp in Jackson took my breath away, knocked me sideways.  I wasn’t ready, had no idea what was coming.  There was reluctance, skepticism, call it what you will.  I ran head first into something so much bigger than me, something about the essence of living after cancer – rebuilding, reclaiming.  I see now that the day I arrived in Jackson in late August, 2009, I was not really a whole person.  There were fragments of me – I was in pieces, left shattered after my illness, looking for something, anything, to help put me back together again.

Before First Descents, it never would have occurred to me that there was still so much life left in me – that I was funny and fierce and strong – so unbelievably strong.  I had no idea.  I was still so afraid.

So Jackson lit a fire, pushed me over the brink.  At the bottom of my first rappel, I cried like a two year old – I didn’t even know why.  I just remember leaning back against that rope, Jenny Lake over my shoulder, endless air all around me, and thinking, This is it.  I am free-falling; there is nothing to catch me.  Nothing, of course, but my own courage, and this unending net of love and support from my fellow campers and survivors, the people who knew my struggle.

Then, the aftermath.  As I like to say, Anything and everything for FD.  And so it has gone.  Some writing, some interviews, some speaking engagements.  If you get me started, I will never shut up.  I may not be the world’s greatest rock climber, but I can talk incessantly about how First Descents taught me to live again.

I see now that what happened to me in Jackson enabled me to regain control of both my body and my spirit. There is no way I would have become committed to running the way I have without my FD experience.  I never would have thought I had the stamina or the focus or the discipline.  In some way, I feel I would have remained trapped in the version of me who couldn’t climb stairs or stand up for five minutes in the shower without dissolving into tears.  All of that resilience I owe to First Descents.

To be quite honest, going into Moab last week, I was a bit apprehensive.  Could it be that way again?  Having already been so transformed in Jackson, what was left?  This time, I already knew how to rappel.  I knew the feeling of falling.  I knew something about how to maneuver my way up an ornery, sheer rock face. I feared I would miss my Jackson family.  It seemed impossible that the kind of energy we shared, the connections we made, all those months ago, could be replicated. 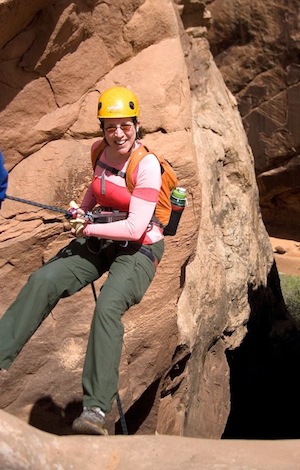 But it was.  Moab was something else.  An extension, a continuation, an unexpected sequel, allowing me to to measure the journey I have been on over these past eight months in stark, tangible terms.  My body felt different – leaner, stronger, more assured.  My confidence had grown, my humor reasserted itself after so many dark and tortured months.  Still, while I had the benefit of a microscopic amount of previous climbing experience, being confronted once again with the physical challenges and the emotional exposure left me, at the end of the week, poured out yet invigorated, drained yet energized.   In hindsight, all those months ago, I thought First Descents signified the end of my cancer recovery – the moment when I reached the literal mountain top and saw all that I had overcome.  After Moab, I see that it was just the beginning.

Eight months ago, I talked about feeling like a lovestruck teenager.  It’s happened again.  I have carloads of new family.  I have laughter and tears and embraces that feel like nothing else I have ever known.  It is a boundless blessing.