The last few days have been something of an an exercise in time-travel, and measuring the more superficial effects of cancer.

Most of my time here is spent dissecting cancer’s emotional and psychological toll. Really, that’s the important stuff.  But what of the physical changes?  It’s gotten to the point where I can’t even recall my body before cancer; I can think back as far back as the height of my chemo-induced weight loss, when I could feel my hips protruding where there was once an appropriate amount of padding between flesh and bone.  Beyond that, it’s a blank canvas.  I certainly can’t recall the contours of my now-deformed navel and abdomen before the brutality of two consecutive surgeries.  This, scars and all, is who I have become. Whoever I was before seems almost impossible to imagine.

Once in awhile, I will say to Mike, “Do you think my face looks different now?”  He always assures me it does not.  There were moments during treatment when I would look in the mirror and literally not recognize myself.  So how could it be that the person who emerged from that nightmare would be unchanged?  Once they stopped pumping my bloodstream with poison, and my body began to heal, I didn’t just revert to the person I was before.  Someone new had to be born.  It was inevitable.

Last night, gathering pictures for our adoption profile book, I took a quick tour through our wedding photos.  Until not too long ago, even an inadvertent glance at an image from our wedding was like a knife in my heart – it called up all of the happiness and promise of that wonderful day, and the cruel twist of fate which smacked us down just four short years later.  Bitterness, anger, sadness – all of it would get stirred up from seeing those naively joyous frozen moments. 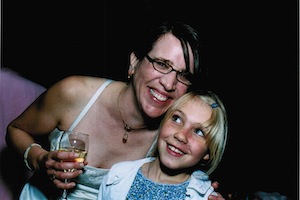 When I look at those pictures now – now that we are moving toward building some revised version of the future that we always hoped we’d have –  I think more about the changes to my physical rather than my psychic self.  Look at that hair!  Look how skinny my neck was!  Where’s my lumpy abdomen?  What a flat chest I had!

Eight years is a long time, especially when it covers most of your thirties.  I’m not the only one who looks different.  Most of us have expanded, grayed and wrinkled to one degree or another.  But when I look at myself in those old pictures, I see not just the so-called “ravages of time,” but those of my disease as well.  And it isn’t just my bust and waistline that look different to me – even the quality of my smile, and the look in my eyes, strikes me as changed.

But perhaps not in a bad way.  Perhaps things are so much sweeter now.  For while the superficial, critical and even angry part of me looks at pictures of my pre-cancer self and thinks, “Goddamn it, I was so much skinnier then!  I look so fucking wide and middle aged now!,” the truth is, I am so much stronger, physically and emotionally, than I was on our wedding day.  Today, I can run ten miles.  Today, I can savor each moment of every day that I am blessed to wake up surrounded by my husband and animals, and walk into a day filled with people that I love.  Today, I can appreciate all of that in a way that is so much richer and more profound than anything I knew before.

And I have much better hair, to boot.