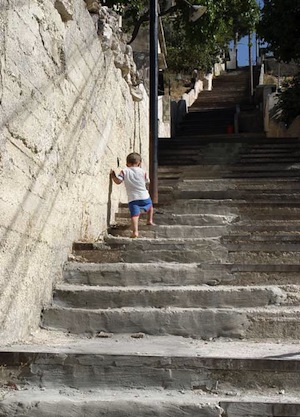 My inclination at the moment is to stack up today’s minor emotional setback against the nightmares that so many other fighters and survivors are enduring, and just let it go.  It’s almost embarrassing to admit these feelings, but I need to acknowledge them, just for a second.  There’s been a lot of progress, but maybe just not quite as much as I thought.

It seems like since the moment I returned to work after cancer treatment in July 0f 2008, there’s been an unending succession of baby showers in my office.  I’ve written about my struggles as a menopausal 30-something in an office full of excessively fertile women.  Most of my co-workers who’ve had babies in the past few years are not people I am especially close with, so I haven’t felt too bad about skipping out for a shopping spree or a coffee date while everyone gathers in the conference room to eat sweets and fuss over booties.

But today was the shower for a colleague who I genuinely like and respect.  Last week, I said to Mike, “You know, I think I’m actually up for Lauren’s shower next week.  I really like her, and am so happy for her, and now that we’re under way with the adoption stuff, it feels different.”

Turns out, not so much.  When the hour arrived this afternoon, I couldn’t do it.  I felt that awkward knot of sadness in my chest, the clenching that I know all too well from the countless moments over the last few years, when the reality of my age-mates’ version of normalcy collides with my own.  I truly believe that I’ll be a mother one day in the not-too-distant future, but it feels different.  Not that I ever necessarily wanted all of the fussing and oohing and aahing that comes with being pregnant;  I just wanted the chance to raise a child.  I guess what still gets me, though, is the fact that cancer robbed me of the opportunity to make my own decision about my path to parenthood.

So I hunkered down in my office and worked through the hour when most of my colleagues were gathered to eat and laugh and share hugs and good wishes for our latest mom-to-be.  I hated realizing that I haven’t come quite as far as I thought I had, that I am still not able to just experience simple, uncomplicated happiness for someone else who is about to experience the joy of parenthood.  But I had to do what I needed to do in order to ensure my own sanity, even if just for that brief moment.

I sent my friend an email, and tried to explain as simply as I could why I couldn’t participate in her shower.  It worries me that the emotional scars which cancer has left will strike people as indifference or coldness, and I wanted to be sure that she knew that I do share in her joy at this moment.  Maybe after some beer and tacos this evening, I’ll feel fortified, and maybe tomorrow I’ll be one step closer to the place of true acceptance that I’d mistakenly thought I’d already reached.

Most days, I feel like I am making huge strides away from cancer.  Other days, like today, I realize I am still fumbling.

One Response to baby steps