inarticulate speech of the heart

I woke this morning with a singular focus:  take a nice long run, hopefully my longest yet, to start the day.  For the past two weeks, I have been fighting a losing battle with the cold and dark, and have found myself buried under the covers well past the ringing of my “running alarm” each morning.  At this rate, it’s shaping up to be pretty a tough winter, at least as far as maintaining my fitness.  Weekends are my only hope for continuing my year-plus stretch of  physical determination and discipline.

So I woke, and dressed to run, while Mike slept on.  He’d been out late playing music, while I sat by the fire and warmed up after our two-hour walk to Collingswood and back for the holiday Parade of Lights.  It had been a fairly idyllic late fall evening and I had gone to sleep feeling fortunate and contented. 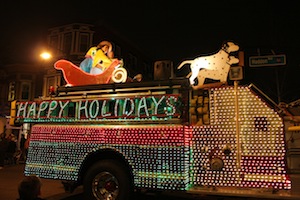 The Collingswood Parade of Lights

As I do most mornings, I checked my email first thing.  I saw a notice that one of my very first virtual cancer friends, who I have written about here before, had posted something on Planet Cancer, where we first got to know each other.  Checking the link to his post, I saw that his dearest friend and soul-mate, a 38 year old woman who shared his diagnosis and history of recurrences, had passed away last Monday, leaving a husband and young son behind, along with countless other heartbroken souls.

His post was pitch-perfect, a beautiful account of his friendship – the word seems inadequate – with this extraordinary young woman:  what drew them together, how they supported each other through their parallel battles.  It was a tribute to a remarkable person I wish I’d had the chance to know better.  His words provided the kind of insight into human connection, particularly in the face of cancer, that I have never seen before.  It seems futile to even try and capture what it was like to read these words first thing this morning, and how the reality of another tragic death from cancer wrenched my heart and cast a fog over my mind.

In the wake of this kind of news, the joy and good fortune of my own life as a survivor takes on a kind of poignancy that leaves me baffled, inarticulate.  Nothing seems to make sense.

My friend – I will call him Nate – also made a point to emphasize how his connection with his friend – I’ll call her Vanessa – was borne of the unique and completely essential social environment of Planet Cancer.  He even went so far as to urge us all to continue connecting with and supporting our fellow young adult survivors through the Planet, as a way of honoring Vanessa.  She was a generous, kind and prodigious presence within the confines of the Planet Cancer social network;  Nate was blessed to have extended his relationship with her into real time, into a vital, central place in his life.  What may have begun as two young adults with a shared diagnosis finding comfort in a similar sense of humor and irony grew into the kind of bond that truly defies description.

When I first joined the conversation on Planet Cancer, in February, 2008, at the beginning of my treatment, Nate and Vanessa were both regular contributors, often commenting on people’s posts and discussions, and sharing with all of us an honesty, energy and humanity that I believe we all truly relied on to lift us up in our darkest moments.  The magic of these two is that they were both always able to translate their own struggles into high-spirited wisdom that benefited us all.  They were an engine of love, tirelessly powering us all forward in the face of cancer, no matter how weak or scared they themselves might have felt.

My writing that began as an informal blog on Planet Cancer eventually grew into this site, over the summer of 2009.  As I grew stronger, I felt less need to spend time amidst the virtual connections of my Planet Cancer family.  I started my own blog because I wanted to share my thoughts with a “wider audience.”  Today, that seems embarrassingly self-aggrandizing.  Not to mention that in doing so, in turning away from the Planet, I turned away from the very first place that I was able to make connections with other young adults facing cancer.  It was ground zero for everything that has enriched my life since I was diagnosed.

After I finally took my long run this morning, all the while thinking of Nate and Vanessa and others from my Planet Cancer “class,” the reality struck me: people are starting to die.  Of course, young people have been dying of cancer since the moment I was diagnosed three years ago, and long before that.  But something that I have long dreaded is now happening:  people I have gotten to know along the course of my own cancer journey are starting to die.  This reality has me utterly at a loss.

This afternoon, stupidly, I started sputtering on Facebook.  (What else do we do on Facebook, really?) I updated my status with vague and ill-thought-out comments about the injustice of young adults dying, being angry, blah blah blah.  I didn’t even know why I was doing it, or what I was trying to express.  Some of the comments I received back made it clear that my words were reflecting just how addled my brain was after receiving the news of Vanessa’s death.

The sky is darkening as I write, and night is settling it.  It’s off to a holiday party in a few hours.  I am not feeling festive.  Rather than pretending at holiday cheer with my husband’s workmates, I would like to be somewhere dark and quiet, somehow reunited with all of the souls – living and dead – who have marked me since my journey began, sharing a warming glass of whiskey, and our special brand of love.

5 Responses to inarticulate speech of the heart