When I last wrote, I’d just gotten a hard slap from cancer at the precise moment it seemed I was at long last beginning to put some distance between my life as defined by cancer and the life that I am finally beginning to believe that I am not only entitled to, but will actually have.  For reasons passing understanding, anxiety caught me briefly in her all-too-familiar clutches, perhaps as a (not so) friendly reminder that this dance will never end – not completely.

Over the past few weeks, the truth is, I haven’t really felt the need to write – at least not about cancer.  There haven’t been those moments when I find myself taking note, saying, “I need to come back to this.  There is something of significance here.”  Between the momentum of the holidays and finally getting our adoption process into a higher gear, my preoccupation has been with moving forward, living fully and with positivity – not necessarily dwelling in the shadow of cancer.

In a lovely bit of irony, this past Monday, 11/29, was the three-year anniversary of the MRI which started my cancer journey.  Due to the way my story unfolded, I am blessed with a rapid succession of anniversary dates (MRI; first appointment with my oncologist; surgery confirming diagnosis) all within the space of one week.  Last Monday was also my four-month check-up.  As has become the custom, it was in and out, no muss no fuss.  The only thing slightly different this time around was that I handed my oncologist the medical form from our adoption application – the one with the ominous question, “Does the patient have a normal life-expectancy?”  I’d been wondering ever since getting the form how my doctor would respond.  Finally, it was time to find out.

But it was an exceptionally busy Monday morning, so my doctor said she’d need to take the form to complete and mail it back to me.  The suspense would thus continue.

When I went to the front desk to schedule my next appointment, I was stunned to hear that I wasn’t due back for six months.  I gave the receptionist a confused look.  “Um, I don’t think so.  Can you double check?”  I was so certain of the mistake that I sat and waited for an extra ten minutes while they confirmed my schedule.

After one of the nurses appeared and conferred with the front desk, I was summoned back.  “It’s six months, Ms. Beck.  We’ll need to see you back around the end of May.” Thanksgiving had just passed.  The thought of not coming back to see my oncologist until Memorial Day almost made me laugh out loud.  “OK, great.  Wow.  Thanks for double-checking.”  I walked out of the Perelman Center and up to the Market-Frankford El with a delirious grin on my face.  Not a bad way to celebrate the first installment of my cancer-versary week.

The week rolled on at a relentless pace, with therapy, adoption workshops and a Superior Court brief all thrown into the mix.  The end of each day left me exhausted, and I tried and failed several times to get up for an early-morning run before work.  For reasons I couldn’t quite identify, I needed extra rest, to burrow deep down under the covers and gather strength.  I found myself irritated with my apparent sluggishness, but by the end of the week came to realize that sometimes, the mind and body just need to rest.  It’s a lesson I hadn’t given much thought to since the hey-dey of my chemotherapy.

Finally, mercifully, Friday arrived.  Friday, 12/3, the second of my anniversaries – the day of my first meeting with the doctor who saved my life.  I was up to my eyeballs in brief-writing, and didn’t have much time to spend reflecting on the significance of the date.  At day’s end, my brief was finally complete and I was looking forward to an evening with Mike.  But he was unexpectedly dragged into a work-related cocktail party, so I rode the train home alone, pissed off and vaguely aware of an shapeless sadness creeping in.

Collecting the mail as I walked into the house, I saw the envelope from Penn, which I knew contained my medical form, and the answer to the question I’d been wondering about for months.  I was finally going to see where my oncologist put her check-mark – YES, or NO – next to the question about my life-expectancy.

Before I opened it, I noticed another envelope, one addressed in my own handwriting.  It was the letter I had written to myself from the top of a giant rappel in Utah, eight months earlier.  The contents weren’t necessarily remarkable, or even unexpected (though I certainly had forgotten what I’d written all those months ago.)  But seeing my scrawled handwriting on those pages, remembering the brilliant blue sky above us as we sat on the dust-covered orange rock, waiting for the culmination of our week of climbing with First Descents, I was suddenly put right back into those feelings that have defined my journey back to life.  Fear, anger and sadness, bleeding ever-so-slowly into courage, acceptance, elation.  It reminded me, in a blinding flash, of all of the love and support and fellowship that has finally brought me to the place I am today. 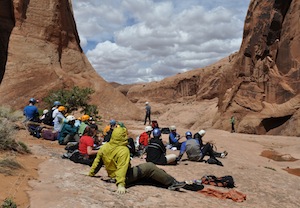 With those emotions filling my heart, I ripped open the envelope from my oncologist, and my eyes fell immediately on the check next to “YES” – the patient has a normal life expectancy.

I don’t quite know what I had imagined, or even what the real significance of the answer to that question is.  I suppose I’d guessed my doctor would have had to write some convoluted explanation about how with proper screening and monitoring, blah blah blah…it was possible that I would live to a ripe old age.

My doctor is not a clairvoyant, and of course she doesn’t have any way of knowing how long I will live.  But as I prepare to spend time this evening writing my autobiography for our adoption profile, and as my mind turns increasingly to what our life will look like once we are parents, I must confess that I have worried, however unconsciously, that we are embarking on an ill-advised journey that will ultimately see my husband raising our child on his own, after I am gone.   Having this affirmation from my doctor, though, gave me a sense of confidence about what we are trying to do, and provided a shot of hope and encouragement that I know will catapult us forward.

As my feelings began to settle that evening, I poured myself a glass of wine, and set to wait for Mike.  I turned on some music, and moved through the house, feeling somehow lighter than I had when I got home.  Still, something gnawed at the corners of my consciousness.  A short while later, Neil Finn’s “Into the Sunset” came over the kitchen speakers.  I immediately felt my eyes well with tears.  I recalled, in an instant, Valentine’s Day 2009, when Mike and I sat and recorded our own version of that song.  I remembered the way we had fought earlier that night, the pain and rage that were still so real and raw.  I couldn’t explain my tears other than to realize, in that moment, that no matter how strong I become, no matter how my life grows, no matter the beauty that fills each day, I will always be haunted, however remotely, by the scars which cancer left.

I exhaled deeply, and my mind turned to several of my friends who are battling so hard right now, whose hope may be dwindling but whose fights go on with love and grace and determination.  I imagined their families, and I thought of my own huddled together in the waiting room outside of the surgery on December 5, 2007.  I remembered the blackness that seemed set to engulf us all, and the marveled at the light all around me now, three years later.  I cried because I want so much for all of my friends who are suffering to know how it feels to be where I am now, and because I am afraid that they never will.

Today’s date is December 5, 2010.  Three years ago today, I was cut open, and cancer was cut out of my body.  The intervening years have seen fitful cycles of fear, resignation, doubt, terror, pain, sadness, heartbreak, exhaustion, confusion, hysteria – emotions which have gradually given way to determination, laughter, peace, hope and genuine happiness. Three years ago, I could never have imagined being in the place I am today.  It feels nothing short of miraculous.