Increasingly, over the past week, I have been preoccupied with the possible. For me, cancer changed the meaning of odds, and today, a few hours from Game Six of the National League Championship Series, with my mind very much on my baseball team, I am again contemplating what it means to overcome them.

It’s a simple, direct journey.  Two years ago, I was lurching through the early stages of my recovery from treatment and the devastating emotional toll of diagnosis.  I was some kind of shell, poured out of everything I thought I knew about myself.  The evidence of my body’s rebellion was written all over me:  my healing scars, my curly duck-fuzz hair, the persistent buzzing in my feet and legs.  And of course, there were continued oceans of tears that I never thought would stop flowing – powerfully and unexpectedly, tides of emotion continually dragging me down, holding me prisoner of my history, the wretched turn of events that had befallen me. 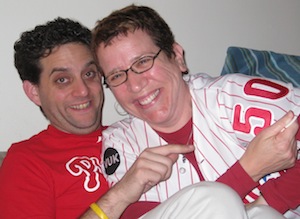 At that same moment, my Phillies were doing something incredible, something they hadn’t done since I was eight years old.  They were systematically dismantling a 25 year legacy of defeat and disillusionment, marching almost effortlessly to a World Series title.  October of 2008 was a brilliant and beautiful sea of red, of odds overcome, and dreams fulfilled.  I watched breathlessly as my team finally achieved the impossible.

But celebrations only last so long.  Fall bled into winter, and the endless cold, grey months that followed the parade down Broad Street gripped me hard, and the downward spiral resumed.  Weakness, sadness, confusion, all joined forces in an effort to swallow me whole.  There were moments when they came close to succeeding.

I wish I could identify the moment when I found the courage to pull myself up, and out – slowly, methodically.  There had to be some kind of rebirth;  I was not prepared to give up.  There was too much love all around me.

I started dragging myself –  sometimes literally – to the gym in the evenings. I stepped onto the treadmill.  A fast walk for a few minutes, a light jog for a few minutes.  These were the ultimate baby steps.  I ignored the fast, slender legs pumping along side mine.  I tuned out the bodies that I saw, pounding, pushing faster and faster up growing inclines.  I tuned only into my own body – first getting to know the limitations, and then finding the strength to push through them.

Endless weeks of incremental increases in distance and pace finally ended with a journey outside, onto the city streets.  Something was freed in me, and I knew there was no turning back.  I didn’t care how long it took.  I didn’t even where I was headed.  I just knew that I was going to keep running, and getting stronger, and pushing myself, away from the devastation that tried to devour me. 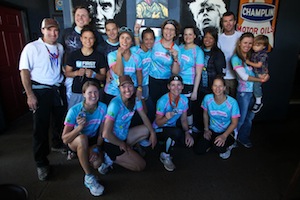 October 2010: After the Marathon with my First Descents family

Flash forward, two years later.  Last weekend, I spent three insane, beautiful days in Denver, my new home away from home, celebrating First Descents, and running on a four-person relay team in the Rock & Roll Marathon.  My leg was 6.2 miles – a 10K.  On a picture-perfect morning, I joined with members of my incredible new family, passing the baton (actually, a drumstick) as together we travelled 26.2 miles at 5200 feet.  When I finished my leg and met up with my teammate Bethany (aka “Marhaba”), all I could think was, “More.”  It’s just a matter of time, I now know, until I complete 13.1 on my own and after that, off in the distance, 26.2.  I have come this far, and there is no reason to limit my imagination, my sense of what I believe to be possible. 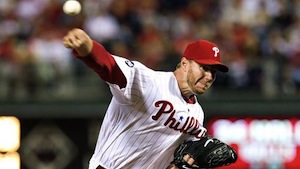 With all of this in mind, as I consider the obstacles of the last two years, and the unexpected things my battle-weary body has been able to achieve, I have a heart full of hope for my team tonight.  This year’s NLCS has been a struggle.  The last two years, they breezed into the World Series.  This year, they have overcome injuries and slumps, epic losing streaks and diminished expectations.  Two days ago, it looked like it was all about to end.  Tonight, they can reach back, deep into a place of strength and focus and force of will, and gain the chance to surmount the seemingly insurmountable.

If they want to endure, to fight one more day, it can happen.  This much I know.