actually, it kind of IS about the bike

Last weekend marked a huge milestone in my journey away from cancer and back to life. It crept up on me, rather unexpectedly, and left me filled with a lighter-than-air sense of triumph.  After cycling seventy-five miles from the outskirts of Philadelphia to Ocean City, as I lingered at the Day One finish line, inhaling pierogies and Turkey Hill ice cream, it dawned on me:  I am back. 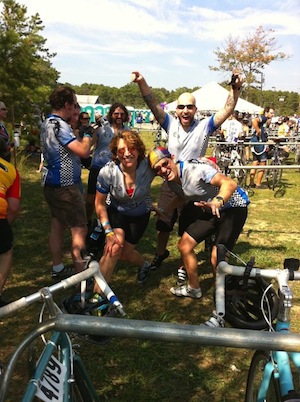 With a few of our "Anti-Corp" teammates on Day One

The MS 150 City to Shore has been a significant part of my life since 2001.  That year, a few short weeks after 9/11, I completed the ride on my own, without friends or teammates to buoy me.  The second day, I rode in torrential, chilling rain the entire seventy-five miles.  Soaked American flags hung and flapped from frames and handlebars and backpacks.  It was my first experience with extended athleticism of any kind, but something happened inside me during those endless, solitary hours with my bicycle.  I knew that cycling, and the MS 150, were now an essential part of my identity.

After missing the 20o2 ride to attend a friend’s wedding, Mike and I rode each year, religiously.  Over the years, we have raised thousands of dollars for the fight against MS, the disease that my mother-in-law has battled for twenty years.  Each summer, from 2003 to 2007, we would train, raise funds, and ultimately end up on the Ocean City boardwalk (usually on a sunny, breezy, early fall day), blissfully stuffing our faces with Mack and Manco’s Pizza and Johnson’s caramel popcorn.  Delirious but delighted, we’d wake up the following morning after sleeping on a thin mattress in a cheap hotel, and ride all the way home.

When we completed the 2007 ride, we had no way of knowing that a little over two months later I would be diagnosed with Stage IIIA ovarian cancer.  Crossing the finish line that year, it didn’t even occur to me that we wouldn’t be back the next year, or the year after.  I could scarcely imagine what fate had in store, just over the horizon. 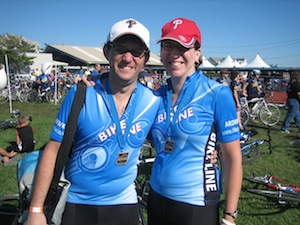 You'd never know I was sporting a 10-cm tumor on my ovary, would you?

A few short months after the 2007 City to Shore, I was in the hospital, recovering from abdominal surgery.  A few months after that, I would begin chemo.  All the while, my body was in utter upheaval, rebellion – shedding pounds and hair at an alarming rate.  I remember so distinctly writing on my old blog over at Planet Cancer about my completely irrational perception that I was surrounded (virtually, at least) by other young adults who, while undergoing treatment, were able to maintain an insanely active lifestyle, complete with regular trips to the gym, training for distances runs, you name it. Or, as I believe I once put it, “climbing Mount Everest.”  I, meanwhile, could scarcely climb a staircase.

Toward the end of treatment, probably in late May of 2008, I recall announcing to my virtual cancer family that as long as I could get my strength back for the MS 150 (in September), I would be OK (mentally, emotionally.)  Anything short of that would feel like a soul-crushing defeat.

Looking back, it amuses me, in a sad way, that there was a time when I actually thought that four short months would be all I’d need to recuperate from the trauma of multiple surgeries and chemotherapy and resume my pre-cancer fitness regime, culminating in a 150 mile bike ride.  The extent of my delusion speaks volumes about how profound a disruption a cancer diagnosis can be to a once seemingly-invincible young adult.

The 2008 ride came and went – predictable, in hindsight, and tempered quite a bit by the fact that we instead spent that weekend at Citizens Bank Park watching the Phillies clinch the National League East on their way to a World Series victory.  It was the year that followed, though, that surprised me most of all.

Missing the 2009 ride never seemed like an option.  In fact, we registered fairly early in the season, with every intention of participating.  But something wasn’t quite clicking. Getting back in the saddle proved almost as difficult mentally as it was physically. Peripheral neuropathy in my feet left me with a perpetual sense of being off-balance;  I pictured myself climbing on to my bike and immediately tipping over as I tried to pedal, like a child just learning to ride.  I eventually made it back onto my bike, but found I lacked the stamina I craved, that I felt I deserved, that I knew represented the real me.

One sun-dappled Spring morning in 2009, Mike and I rode along Martin Luther King Drive, and as I watched him pull further and further away from me, I just let the tears roll down my face, feeling them dry in the wind.  In that moment, gripped with anger and sadness and frustration over what cancer had done to my body, I was terrified that I would never again be able to ride with the strength and endurance I once possessed.

Despite my best intentions, the 2009 ride was not in the cards.  Around that same time, though, my interest in running began to creep in, unexpectedly. I’ll never know quite what caused it, but I am forever thankful, because I truly believe it was embracing running, and using it as the primary weapon in my recovery arsenal that ultimately allowed me to climb rocks in Wyoming and Utah, and to finally, joyfully return to the MS 150 in 2010, stronger than ever.

This past weekend’s ride was one of the happiest moments in my life – before or after cancer.  The ride is long, grueling and tedious, mostly flat but sneakily ornery in unexpected places.  Hard-core types ride in pace lines;  others text while riding or refuse to clear the road for car traffic, giving us all a bad rap in the townships through which we ride.  The port-a-potties are vile, the rest stops crowded, the snacks plentiful but by the second day, a bit nauseating.  The causeway bridges are wind-swept nightmares.  Muscles burn.  Bugs get in your mouth and eyes. 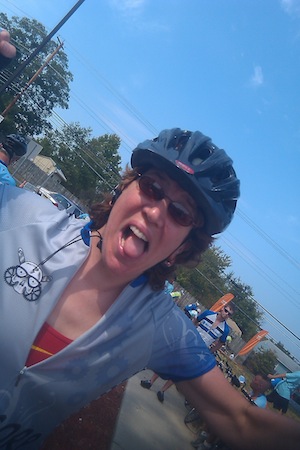 Happily crazy (and crazily happy) along the route

Still, I danced at the rest stops.  I whooped and raised my fist in the air each time we rode past a photographer.   My fellow riders looked at me with bemused confusion.  It mattered not.  It was 2010, three years after my cancer diagnosis, and I was back.

One Response to actually, it kind of IS about the bike