a cyborg no more (or, so long, chest port)

This morning, I reported to the Pereleman Center at HUP to finally – almost two years after finishing chemotherapy – have my chest port removed.  This small metal disc with the rubbery center and skinny little tube has been nestled in my left clavicle since February 11, 2008.  (Not that I’ve been keeping track or anything.)  Throughout treatment, it worked like a charm – never once got infected, always allowed my nurses to draw blood without a hitch.  It also spared me and my veins countless needle-sticks which would have undoubtedly left me a track-mark-covered mess (in addition to all of my other treatment-related afflictions.) I’ve heard some nasty stories about these devices, so I certainly feel fortunate that mine proved so agreeable.

Still, I couldn’t wait to be rid of it.  I’d had my abdominal port removed not long after finishing treatment, and I’d a vague recollection of my oncologist telling me, before the ports were placed, that she might like to see me keep the chest one “for maybe a year” after finishing treatment.  But one year came and went quite awhile ago, and check-up after check-up would pass with no reference to it (other than the occasional, “You’re having your port flushed regularly?”)  I eventually began to wonder if she had forgotten I still had it.  You know, so many patients, so many ports – who could blame her for  losing track?

But at my last check-up in March, she finally uttered the magic words – “I think it’s time.”

My chest port and I have had a long and complicated relationship.  As much as I hated what it represented, the fact that it was a constant reminder of my cancer, literally embedded within me, I kind of loved the way it made me feel like a Cyborg, just a teeny bit bionic.  It never caused me any physical discomfort (unlike my abdominal port), and my surgeon left me with the faintest, most perfect, virtually undetectable little scar.  (Heaven knows what it will look like when I pull the dressing off on Friday.)  Sure, it was a pain to have it flushed every six weeks, requiring me to make an extra trip to the chemo suite between my regular check-ups, but it was, in some ways, my own, almost-secret souvenir of my cancer fight.

But it has also been a double-edged sword.  As is often the case, the magical thinking about my little port has cut both ways, as treatment has become an increasingly distant memory.  On the one hand, I have told myself, the port has been my insurance policy against more cancer.  Like believing it won’t rain as long as you carry an umbrella, I have told myself from time to time that as long as I have this sucker nestled inside of me, there is no way I will ever need it again.

Conversely, it’s been a stigma, a nasty reminder, and an invitation for cancer to come on back and give it one more try.  Bring it on, you devious, evil cells.  I am ready.  They can always just plug me back in and start this whole insane dance over again.

Both thought processes are, of course, ridiculous.  But once again, I have looked for order and reason in the chaos that is life with cancer.  Even now, armed with the knowledge of my genetic mutation, there are so many unknowns:  if, when and where cancer will strike again.  We’ll never know, regardless of whether or not I stayed connected to my port for another day, or another year.

So out it came today.  A simple business, all in all, performed with business-like precision by the same general surgeon who placed it back on February 11, 2008.  As I sat in the pre-op area, chatting with my friend who accompanied me, I said to the nurse and one of the many doctors who came to visit me, “Can I have it?” 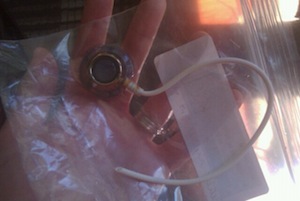 Everything seemed to stop for a moment.  The nurse cocked her head, and the look in her eyes suggested she was contemplating calling in a psychiatric consult.  The two doctors looked at each other, like a comedy team.  There was some awkward muttering about having to check with the surgeon.  I looked over at my friend and smiled.  The medical professionals may not have understood – just another example of how much we need to keep educating people about the young adult cancer experience – but my friend surely did.  He had taken me to chemo, walked my dog when I was too tired, and had seen me every ugly, unpleasant step along the way – from diagnosis to treatment to recovery.  Maybe that’s really the only way to understand.

After having my body so brutalized by surgeries and treatment, a quick out-patient procedure under twilight anesthesia is barely enough to give me pause.  Twelve hours after the surgery, and I haven’t even taken so much as a Tylenol.  Nevertheless, the psychic triggers are real, and when I was wheeled into the operating room, even though I was able to stand up and get myself situated on the table, even though I was relatively calm and relaxed, when I felt the frigid air of the OR and found myself staring up at the enormous, sinister lamps, a chill went through me.  The nurse asked if I was cold, and covered me with warm blankets, but the chill went so much deeper.  There was no avoiding going right back to the operating theater on December 5, 2007, and hearing the anesthesiologist ask me where I would like to go  – in my mind, as the drugs kicked in – and me telling him, “New Zealand.”  Imagining the war that was being waged inside my body, and the measures that were about to be undertaken to try and save me.

Two days ago, I woke in the morning from a vivid cancer-themed nightmare.  Prompted, it seemed, by my upcoming surgery, I dreamed that my oncologist told me that she’d found more tumor on my remaining ovary (apparently I have three?) and that surgery would be needed.  More terrifying, perhaps, than the thought of more cancer, was my doctor’s non-chalance, and her unwillingness to comfort me when I became distraught at the news.  Her attitude seemed to be, “Well, that’s just the way it goes.”

Perhaps one day, that dream will come true.  I see others battling recurrences, or cancers that don’t respond to treatment in the first instance, and I am continually amazed.  It’s difficult to know how I will fare, if and when that time comes.

But I cannot dwell there.  I cannot, because today, for the first time in over two years, my body contains nothing but 100% all natural Emily Morrow Beck.  Parts of me are gone, but there is no longer anything foreign lurking under my skin.  Finally, I am once again me, unadulterated.

2 Responses to a cyborg no more (or, so long, chest port)