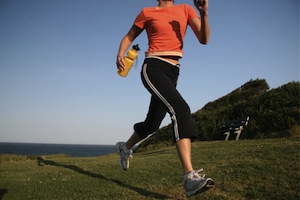 When cancer struck, I went from being fit and active (not obsessively so, but I biked with enthusiasm and hit the gym three or four times a week) to being completely inert.  Not just inert, but sliced, diced, poured out and pumped full of poison.  I lost fifteen pounds;  I was weak.  Fifteen minute walks with the dog were the extent of my physical activity for many long months.  Climbing the stairs in my house was often a heart-breaking exercise.

After I finished treatment, in June of 2008, I wanted nothing more than to resume my pre-cancer level of activity, but my body was nowhere near ready.  Instead, it demanded continued rest.  Over time, it become a vicious cycle of sorts – the longer I went without physical activity and told myself, “I just need a little bit longer.  I’m almost ready,” the harder it was to find the motivation and courage to just start DOING.

In September of 2008, I remember being out with my dog (oh wait!  I was exercising!) when I got a phone call from my Aunt Sally – a cancer survivor several times over and a fierce, relentless athlete.  We were talking about exercise, and I explained my plight.  I was afraid, I told her.  I was afraid to even try, to face my limits.  I imagined going to the gym by myself and having a panic attack as I fumbled with the machines, being gripped with the vertigo brought on by the neuropathy in my feet.

Sally, while totally sympathetic, gave me the gentle kick in the pants that I needed.  “You have to start somewhere,” she told me.  “It’s okay to start small, but you really ought to give it a try.  You’ll feel better once you get started.”

And so it began.  The next day, I laced up my sneakers and headed to the gym, and began my long journey back to fitness.

I did indeed start small – on the treadmill, walking fast, running for a few minutes at a stretch.  I remember when I was first able to run a full mile, it felt like a victory of Olympic proportions.

Running, more than any other form of exercise, became suddenly, vitally important.  Post-treatment, one of my greatest struggles was (and to a certain extent remains) the discomfort and pain associated with peripheral neuropathy in my feet and calves.  Oddly, the neuropathy didn’t really come on in full force until after I finished chemo, which made it that much more aggravating.  Treatment may have been over, but months later I continued to feel its ravages every day, with every step I took.  Running, thanks to the neuropathy, was harder and more challenging than anything else I could put my body through.  For that very reason, it was a challenge I was determined to take on.

I have made monumental progress since that first epic mile almost a year and a half ago.  In May of 2009, I ran my first 5K – huffing and puffing, having to stop and walk a few times, and clocking in at about a 12 minute mile.  But crossing that finish line was one of my greatest personal victories ever.

Less than a year since that 5K, I am closing in on 10K, and have picked up my pace to an almost respectable 10+ minute mile.  I have been running religiously, every other day when possible, and each time I set out, I seek to push myself a little bit farther, and hopefully, run a little bit faster.

Last week, though, I felt myself pushing up against my limits in a way that was uncomfortable rather than motivating.  I was out in the evening after work, on my usual route along Delaware Avenue, and I realized I was struggling.  For the first time in ages, I had to stop and walk for a few seconds, to catch my breath and rest my legs.  It was disappointing and frustrating, but after walking for a few moments, I gathered up my strength and pushed on. Recognizing that I wasn’t operating on a full tank, I trimmed my distance down by about a half-mile.  I still felt accomplished at the end of my run, but something continued to gnaw at me.

This past Sunday morning, while it was bitterly cold outside, I ran inside on the treadmill, and found myself hampered by stiffness in my legs, and discomfort in my feet.  I wanted to push myself, and tried to for a bit, but soon realized I needed to dial it down, pull back and rely on what an old yoga teacher used to call the 70 percent rule – exert only up to 70 percent, always leaving something in reserve.

And so this morning, I gave myself permission to tone it down:  You don’t have to top yourself every time you run. The realization struck:  I don’t have to beat cancer every time I put on my running shoes; I already did.  And just because I don’t run a quarter mile farther each time I go out doesn’t mean my cancer is going to come back.

That’s right:  running doesn’t cure cancer, or prevent recurrence.  It might not even help me lose some of this menopausal weight I’ve been caryying around.  But what it does do is give me an incredible sense of fulfillment, strength and positivity.  It’s something that seems so impossible, so hard, and yet I am able, somehow, to do it every time I set out.  As my sister said recently, it’s not about the distance, it’s about the perseverance.

This morning, when I started out on the treadmill, my legs were stiff and painful.  When I finished, and realized that I’d clocked a pretty sluggish pace, I was upset.  I felt like my body was rebelling, as if I suddenly had reached my limit with this endeavor, like I will never be able to run that half-marathon, or even 10K, that I have been so gleefully anticipating these past few months.  I felt like cancer was winning again by taking so much from me, physically, even now, a year and a half after finishing treatment.

But it isn’t.  I won’t let it.  My legs may not be steel springs, and I may not be fast as a leopard, but I am running with every ounce of determination that I have.