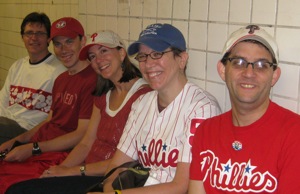 I have never thought of myself as having an addictive personality.  In general, I can moderate my intake of things that are bad for me (ice cream, alcohol, television), and can avoid becoming obsessed with things that are good for me (exercise, eating well.)  But as I enter Week Two after First Descents, I am feeling a bit like what I imagine someone feels like when she is wondering where her next line of coke is coming from.

For the most part, the euphoria I felt during our week in Jackson has been sustained, if in a somewhat muted form.  I just feel happier.  More positive, more forgiving.  (OK, I did get a little frustrated with my fellow humans at the grocery store this afternoon, but I think that’s inevitable.)  I want to hug people, refer to them as “sweetie” or “babe” and give them a pat on the arm when I pass them in the hall at work.  I want people to feel the love radiating off of me, as if I am some kind of sun made of goodwill.

This feeling I owe almost entirely to my fellow campers and the incredible energy which they gave off while we were together, which I absorbed more completely than I realized while it was happening.  For an entire week, I was a Love Sponge.  (Insert sexually suggestive comment here, Hollywood.)  All I want to do now is give it back to everyone around me, the people who make up my every day life, the people with whom I shared connections before I left for Jackson on August 30.

Friday night, we had our dearest friends over for Indian take-away and what was supposed to be a game of Texas Hold ’em, but which turned into just a blab session, getting caught up on the events of recent weeks.  These are the two couples who formed our primary source of support while I was in treatment, and I consider them the essential core of our group of Cancer Allies – which was extensive, but which included a lot of people who were not available to take me to treatment, come over at a moment’s notice when I was feeling hysterical or bring us dinner.  It was grounding, to say the least, to connect with these friends after a long summer when we all had trouble being in the same place at the same time, and in particular, after the week I spent in Jackson.  When I view my life through a narrow lens, I feel like all I want and need  is to be surrounded by other young people who have lived through or are living with cancer, and who understand – without me having to say anything – the trauma I have endured.  But stepping back from that limited view, I realize how utterly vital it is for me to nurture my relationships with people who haven’t lived this same nightmare, but who love me and care for me and want to see me flourish as a survivor.

While the six of us sat around over plates of Chicken Tikka Masala and Saag Paneer, I talked about a vision for my future which involves bringing these worlds a little bit closer together.  I want my fellow FD-ers who live in the area to have a chance to meet and connect with the people who saw me through the physical trauma of my illness, and who have been patient with me during my emotional readjustment to the land of the living. 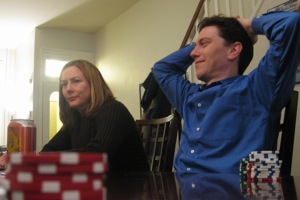 I imagine the nicknames these dear people would be assigned.  I think about Joe, who, the morning he came to the house to take me to one of my last out-patient treatments, sat patiently as I worked through my emotions and nausea before we headed to the hospital, and who, smilingly, ate  a half-dozen Wegman’s chocolate chip cookies as he waited – and even permitted me to film his feeding frenzy, which was memorialized in one of our treatment videos.  (Is there any doubt he would be dubbed “Cookie Monster?”)

I think about his beautiful wife, Rachel, who was completing her degree in acupuncture while I went through treatment, and who came to the house repeatedly to treat me – and, perhaps even more importantly, to hold me tight when I shook with rage and sadness.  (“Needles,” no doubt.) 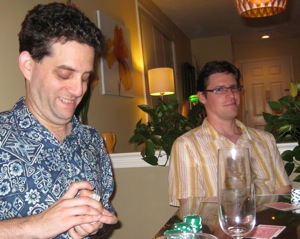 And dear Michael Pfeiffer- “Pf,” as he is affectionately known, to distinguish him from my own husband (also Michael) – who provided free psychotherapy without even knowing it, and who showed a compassion and a kindness during my treatment that was almost staggering.  To this day, whenever I see him, I hug him extra-tight, and hope that he knows why.  (“Dr. Freud,” perhaps.) 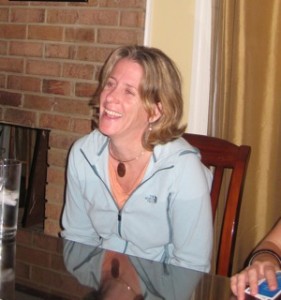 And of course the one and only Anne – crazy, high-strung, theatrical Anne – whose boisterous laugh forms a soundtrack to so much of my memory of being in treatment.  For no matter how sad or depleted or hopeless I felt on any given day, the sight of her coming through the front door always managed to lift my spirits.  (Not quite sure about her nickname, but my first instinct says, “Groucho.”)

These four dear friends were an essential part of the reason why I  – and my stalwart husband  – survived treatment, and why I am living more fully today, as I quickly approach the two-year anniversary of my diagnosis.  It was hard, while in Jackson –  falling in love with my fellow campers, feeling like we were the only souls on earth, and that we understood each other in a way that no one else ever could – to hold all of this other energy in my heart.  The feelings engendered on the rock, on the hilltop, in the dining hall at 2 AM, seemed so huge, so immediate, so all-encompassing, that it was easy, in that moment, to lose sight of all of the people whose love and support enabled me to get there in the first place.  One of things I am determined to do now, as I hold fast to the intense feelings from Jackson, is to widen the embrace, and make sure that these people to whom I owe so much know how deeply I love them.

2 Responses to widening the embrace