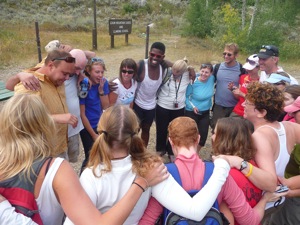 First Descents took me well outside of my comfort zone – as advertised – in ways that I expected (physically, socially), but this feeling that I have been left at a loss for words is definitely not something I anticipated.

This is supposed to be my snuggly, warm place, where I retreat to do one of the few things that usually comes effortlessly to me:  writing.  Now, though, four days after returning home, I feel utterly tongue-tied, like a love-struck teenager.

Today, life in the city carried on much as it did when I left town on August 30th.  The lady who sells bamboo (WTF?) was in her usual spot on 15th Street outside the subway entrance.  Some environmental activists were holding up a make-shift clothes line to make some kind of point about something.  “Bernard,” in a sweatsuit and looking homeless, shoved his way ahead of me in line at the coffee shop to ask for his usual, some kind of peanut butter cookie that he clearly fancied.

Life in the office felt a bit dreary, and, as I was compelled to share with my fellow-campers mid-day, I was gripped by an almost uncontrollable urge to hijack the file cart sitting outside my office and start doing donuts right there on the 9th Floor of the Public Defender’s office.  In Jackson, we were awash in joy, 24/7.  Larry Boy said it best around that final campfire:  Life isn’t always donuts.  But why does it take the trauma of cancer to open your mind to the reality of donuts in the first place?

My mind has been buzzing ever since I left Double-oh-Seven at gate 46 at the Denver airport on Friday afternoon.  Often, words come to me in particular moments, and I think to myself:  there’s a start, there’s an image, something I can latch on to, to kick-start my brain and help me frame an experience, a feeling.  But this week, with these people, has been a struggle to frame.  Maybe that’s why I dove head-first into making that video almost as soon as I got home.  The images were all there, the moments already framed by the lens.  Point, shoot.  It’s all in there, in those moments I watched endlessly as I edited – over and over, a recurring loop.  It was so easy.  Everything was right there, in front of me.  We all lived it.  All I had to do was match the image to the music.

What am I left with now?  An array of emotions as vast and awe-inspiring as the Tetons we climbed.  I suppose, though, that it’s only appropriate that an experience as massive and life-altering as our week with First Descents should leave me feeling so diminished, at least as far as my ability to  express myself.

So, I am rendered speechless.   There’s something else, too, though.  My mind has been reaching, struggling for a point of reference, some way to organize what happened.  And today, in a brief email exchange with one of my new friends, it came to me:  we have a secret.

Thus, I was reminded:  of a night in the woods, 20 years ago, when I was a free-wheeling acting student at the Pennsylvania Governor’s School for the Arts.  My fellow actors and I were stepping lightly through the woods around Bloomsburg University, preparing for a performance of  “A Midsummer Night’s Dream.”  Our teacher had led us out into the darkness, into the twilight, so that we could tap into the essence of what it means to be immortal, a spirit, a sprite.  Our interactions were wordless – we would touch occasionally, share a glance through the darkness, and connect in some way that was beyond words.  It was inarticulable, what we all shared, but we knew it was there.  We had a secret.  We were immortal.

The late nights I spent on the hilltop in Jackson with my fellow campers, overlooking the valley, with the Tetons on the horizon, contained strong echoes of that evening in the woods all those years ago.  Granted, this time we had language – mostly crass – and laughter, endless laughter.  But it was the unspoken thing, the thread that connected us all to each other, the reality of our experience with illness, that reverberated most powerfully through the darkness, that most brilliantly reflected the moon’s light.  In facing death, we had connected with our immortal selves.

I recognize the irony.  My fellow campers in Jackson and I all share the common nightmare of cancer – not just cancer, but cancer in our youth, in our young adulthood.  We have all felt the immediacy and vibrancy of life – which is supposed to be stretched out ahead of us, seemingly endlessly – torn out from under us.  We have all laid in hospital beds, crying ourselves to sleep, feeling like the last, lost soul in the entire universe.  We have struggled and writhed in pain, we have beat our breasts (some of us have even had them removed), we have raged, raged, raged.  We have felt fear and anger and sadness that most of our peers will never know.  But through that awful prism, we have come to a place of absolute, perfect bliss.

I tried, stumblingly, our last night in Jackson, around the campfire, to articulate this beautiful, excruciating tension I feel so often when I think about my illness:  how can something so dark yield so much beauty?

I will never understand.  I will just give thanks.