This long, punishing winter has driven many of those around me to something close to madness.  People are starved for warmth and light and fresh air and green things growing all around them.  This cold and snow and ice, this inability to allow our bodies to move and feel freedom in the space of the outdoors, it is enough already.  It’s not just the toddlers among us, with their boundless energy and need for a constantly changing environment, who are feeling the walls closing in at this point.  It is everyone.

That being said, I thank this winter of our discontent for its part in the formula which created a recent powerful explosion of emotions.  A few weeks ago, for consecutive days, I found myself slumped in a heap, weeping, as I tried to manage my son’s moods, runny nose and seemingly endless dissatisfaction with every single thing I did.  For nearly two years, being a mom has felt like this euphoric ride, something I was blessed to finally experience after the nightmare of cancer and everything it left in its wake.   But during that bleak stretch, after days of no sleep, things began to crack, and I began to feel a frustration with my son (and myself) that caught me totally by surprise.  The guilt that grows out of feeling anger toward my child calls up so much that has come before, most particularly the hardship which my husband and I endured before we were able to become parents.  I feel I am not permitted to feel the hard emotions that come with being a parent, simply because I yearned for this so long, and because in the end, nothing is harder than cancer.  Where is my endless strength and resilience, my bottomless reservoir of patience and gratitude?  For a painful, prolonged moment, it certainly felt like it was all gone, perhaps buried under a snowdrift, or a sheet of ice.   It felt instead like the choice I have made, to devote myself to the full-time work of raising my son, has turned me into a desperate, angry shadow of the strong, clear-headed and loving mother I had thought I was. 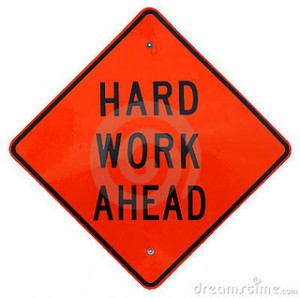 Sleep deprivation can cause all manner of irrational thoughts to go through one’s mind, and a few good nights rest thankfully helped right my psychic ship.  But there is something essential in what I have learned recently that feels true, regardless of how much sleep I have gotten, or being able to blow off steam with friends.  Not long ago, I was discussing the hard parts of parenting a toddler with a friend.  My friend hasn’t had cancer, but she did go through a seven year ordeal of infertility treatments and lost pregnancies before she finally had her daughter.  She, like me, is parenting a wonderful toddler who often drives her to the brink of madness.  And also like me, she is wracked with guilt whenever she finds herself locked in battle mode with her child.  We both feel, it seems, that we are not permitted to acknowledge how hard our jobs as mothers can be, when we longed for our children for years, and spent so much time not knowing if we were ever going to have the chance to parent at all.   And so we are caught.

The truth of parenting, with or without the added complications of cancer or infertility  (or both), is that it is the most wonderful and difficult thing we can do.  As I’ve said here before, cancer (at least temporarily) robbed me of the ability to embrace and accept ambiguity, or gray areas.  Cancer was wretched, the worst, the hardest and scariest thing of all.  It swallowed me whole, or so it seemed at the height of its torment, and when the darkness was all-consuming, it never dawned on me that this disease might ultimately yield some of the most meaningful relationships and connections I’ve ever known, or might allow me to open my mind and heart to the world in a way I was never able to before my illness.  Cancer was bad, and life, once cancer was ”over,” would magically become good again.

It’s no secret, to those of us who have been down this road, that cancer never really ends, no matter how many years of survivor status we can claim.  Its legacy is ever-lasting, and the trick is in managing the aftershock.  And while life “after” cancer is for the most part sweeter and happier than the world I inhabited while in the throes of treatment, there is nothing unambiguously easy or perfect about it.  And so it goes, with the reality of parenting my amazing son.  Naively, I expected to be rewarded with some kind of “free ride” as a parent, because, HEY, we’d already been through so much with cancer that we were going to be blessed with an “easy baby” who would grow magically into an “easy toddler” who of course would ultimately become a perfectly happy, well-adjusted teenager/adult.  Instead, what I now face is the same set of challenges which every parent endures, just with the added sense of gratitude that surviving cancer has bestowed on me.  After enduring what felt like the end of everything, I was finally blessed with a new beginning – which of course brings with it a whole new array of challenges.  But the next time I’m nose to nose with my screaming toddler after endless nights with no sleep, I’ll do my best to remember to be thankful for the chance to be here, doing this hard work, at all.

One Response to hard work