Life can be extreme.  Our fears can consume us; joy can make us feel like our hearts will burst.  Holding it all, simultaneously, as I was made to do recently, can seem nothing short of defying emotional gravity.

There are these moments, surprisingly rare – but perhaps more often for those of us who have lived with cancer – when we are asked to absorb difficult and ambiguous realities, like an abnormal test result, while at the same time celebrating something amazing, like the adoption of a child.  The tumult of the past few weeks – muted by vigorous, daily running and yoga, and nightly cocktail hour – was not fully revealed until the storm of uncertainty had passed.  That Other Shoe never quite dropped; or if it did, it had turned into a nice soft bunny slipper and landed with a harmless “poof.”  In my ultimate relief, I realized how hard I had been working to maintain my psychic equilibrium, and just how scared I had been.

As I wrote previously, my abnormal Pap test results from June were nothing inherently alarming.  My doctor told me directly, “This is not an emergency.”  But when Life After Cancer has consisted of nothing but smooth sailing, even the slightest glitch can feel seismic.

Thanks to the timing of our son’s adoption finalization bash, and an extended visit from my family, I had plenty to distract me from perseverating over my impending colposcopy.  The party, ten days ago, was a huge success, and only served to solidify the reality of our new life as parents, and the wonder of our Early Bird.  We were truly left with our hearts bursting, knowing that Earl is surrounded by so much love. 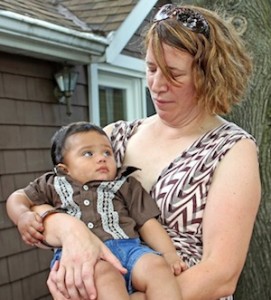 With my Early Bird, at his Big Bash

But what does one do when the party is over, and a trip to the oncologist looms?  Each morning, I rose before dawn to hit the pavement or take refuge at the yoga studio.  Part of this was about keeping my composure during a long stretch with house-guests; likely an even bigger part of it was about reminding (or convincing) myself that I am strong and healthy, that disease is not brewing within me.   I even logged a quick morning run the day of my scope.  Along my route, I held my head high and pumped my arms, smiling at the other runners I encountered.  I was determined to take this feeling of strength with me, right into the stirrups.

Those who’ve been down this road, who’ve been faced with murky medical findings in cancer’s aftermath, know that there inevitably comes a point when the fight becomes too much.  You have to let go, and let in the fear.  For me, it happened  – not surprisingly – at the moment my doctor entered the exam room.  My doctor’s job is to keep me healthy physically, not to tend to my emotional needs, so I did my standard routine of nodding and “OK-ing” as she went through her spiel, including telling me that she’d referred me for a CT scan.  As I listened, dutifully, distractedly, the terror rose in my chest like a tidal wave.  I kept fighting to beat it back, but once my feet were up and the magnifying lenses were trained between my legs, all the ujjayi breath in the world wasn’t going to help me. 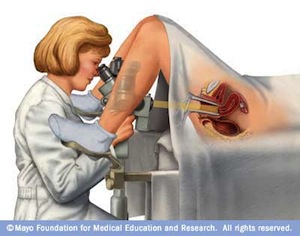 The physical discomfort of the scope may have been the last straw; my breath caught, and the tears started coming.  The same nurse who has always hovered silently during my regular pelvic exams – while my doctor and I engage in idle chatter – reached over and grabbed my hand.  My doctor muttered instructions as she continued with the scope; I continued to cry as quietly as I could, hanging on to the nurse’s hand.  At one point, I did hear my doctor say, “Well, I don’t see anything…everything looks normal.”  But those words of comfort seemed too late, too little, and too remote.  I was miles away, deep in my fear.  And in the grip of that fear, cancer was back.

When the procedure was over, tears still streamed down my face.  I sat up at the end of the exam table, and the nurse handed me tissues.  My doctor’s eyes were level with my own.  She may have touched my shoulder.  She repeated that there were no visible signs of abnormalities during the colposcopy, and explained, matter-of-factly, that it would take about a week for the biopsy results to come back.  She also told me that she wanted me to return in three months, rather than the usual six, for a repeat Pap test.  That news, almost more than anything that had come before, made me feel I’d lost my fight.  Suddenly it seemed that the state of blissful but controlled denial in which I’d dwelt since entering remission four years ago had come to and end.  Once again, I was a cancer patient.

I don’t even remember my doctor leaving the room.  I was left with the nurse, who asked if I was off from work for the day.  I sputtered something about how I’d recently left my job to be with my son, and for some reason felt compelled to explain that we’d adopted a baby in January.  In that moment, nothing made sense.  How could I, with a black hole where my reproductive organs were supposed to be, have a child?  How could I, the ticking cancer time bomb, be a parent to my son?

As my mind reeled, the nurse handed me a maxi-pad (when was the last time I’d used one of those?) and told me to bring pictures of Earl the next time I came in.

In the familiar cold of the hospital bathroom – where so much psychic heavy lifting had occurred for me over the years – I fumbled with my contact lens that had washed out of my eye as I cried.  I stuffed the drape sheet into the trash and put on my skirt.   Thoughts of my husband and son gathered around the edges of my rattled mind.  I had to pull it together.  I took some deep breaths, and told myself, “It’s time to get back to your strength.”

Mercifully, I waited only 24 hours for my biopsy results.  As Earl and I drove home from our mom-baby yoga class yesterday, my phone rang.  The bright sunlight streaming through the windshield kept me from seeing the incoming number.  I picked it up, and heard the voice of an unfamiliar doctor from my primary care office.  He explained that he’d received the biopsy result from Dr. Chu’s exam, and everything was normal.  He’d thought I’d want to know.

I pulled over to finish the conversation.  The doctor reviewed the plan for the CT scan, and asked if there was anything else he could do for me.  I thanked him profusely for sharing the news, and hung up.  The world seemed instantly brighter.  My heart literally felt like it was lifting out of my chest, toward the sun.  “Earl,” I said, “let’s go celebrate.”

Breathing again, feeling hope and optimism return to their place of centrality, I was able to appreciate how truly terrified I had been.  Beneath all of the effort, the diligent fight to remain on an even-keel, there’d been a steady drumbeat of morbid thoughts, telling me that this illusion of health and wellness was just that – a mirage, and it was over.  I would never escape cancer.

There, perhaps, is the hardest lesson from this, my first post-treatment health scare.  Fate has dealt me wonky genes, and if I want to live a long life, and be around to raise my son, I must accept that my reality is one of persistent screenings, scopes and scans.  The poking, the prodding, the occasional ambiguous – or perhaps not-so-ambiguous test result – is inevitable.  Such is my lot.

It remains to be seen if I will become any more adapt at holding it all – the bliss of being a mother to my incredible son, along side the fear of cancer returning and devouring this beautiful family we have finally created.  But I am determined to keep trying,

2 Responses to holding it all