no line on the horizon 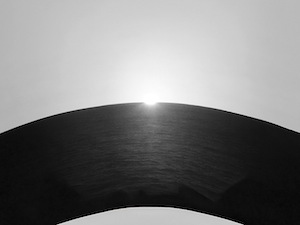 Following my hysterectomy in the early days of winter, 2008, my oncologist presented us with two treatment “options.”  In my haze and numbness, I was largely unable to absorb information; Mike became my eyes and ears, as well as my mouthpiece.  I recall vividly one evening when my doctor called.  I sat on the couch, sitting across from Mike, staring, terrified, while he spoke to her.  I could tell they were discussing statistics, as my doctor conveyed with stark figures the urgent need for me to pursue the “more aggressive” form of treatment.

While Mike listened, with the phone to his ear, I mentally plugged my fingers into mine, chanting, “I can’t hear you…I can’t hear you…” like an obstinate child.  When the conversation ended, I essentially allowed him to tell me that I had no choice – we had to go whole hog on the chemo.  The alternative was unthinkable.  But I never let him tell me my statistical chances of beating my cancer.

I never wanted to know the numbers.  They weren’t going to help me get well.  They were just going to terrify me, perhaps even make it impossible for me to focus on the fight ahead of me.  So it was unto the breach, blind to the statistical reality of the odds which I faced.

Over the course of treatment, and in the months and years that have followed, the elusive “five year survival rate” for ovarian cancer patients with my diagnosis remained a mystery to me.  When “statistics” would come up in the course of discussing the diagnoses of friends and acquaintances, Mike would ask, almost teasingly, “Do you know what yours are?”

“No, and I don’t want to,” I would always say.  File this under “magical thinking,” for it is now clear that my reasoning for refusing to hear the numbers was simple:  don’t tell me, and somehow it won’t be true.

Last night, we hosted my First Descents campmate, Lemondrop, and in the course of our conversation, she mentioned her own statistics.  The number didn’t really register with me – aren’t all statistics bad? – until Mike and I were riding the train to work this morning.  He asked again:  “You know what yours are?”  And before I had a chance to give my stock reply, he spit it out:  “In the 30’s.”  Meaning, for those unfamiliar with how this works, there is over a 60% chance that I will be dead within five years of my diagnosis.

Hearing this figure was the moment at which the floor was supposed to drop out beneath me, sending me spiraling into an abyss of panic.  But it didn’t happen like that.  No Grim Reaper walked onto the PATCO train from the platform at 8th and Market.  I just looked Mike squarely in the eye and said, “Well, I’m 3/5 of the way there and I have no intention of changing directions at this point.”

Not long after arriving at work, I read the latest post from Sarah, my ovarian sister who has been battling since 2006.  Her words hit me hard, as they often do.  She has arrived at a new place in her own fight, a place of serenity and acceptance that is both breathtaking and heartbreaking to see.

For the past four-and-a-half years, we’ve been sailing along through open seas, scanning the horizon with our telescopes, peering from the crow’s nest at the edge of the world, looking for signs of what’s to come. For that time, there’s been no sign of anything, just flat horizon. Some days we’ve had calm seas, and picnics on the deck; other days have been stormy and I’ve stayed below decks. We’ve just kept sailing, waiting and watching.

Now, there’s land on the horizon. Distant, hazy, indistinct, but it’s there. And that’s where we’re sailing. Don’t know how long it’s going to take us to get there, nor whether we’ll change course and sail somewhere else first, but there’s no doubt of my destination.

Sarah is a mother of two, with a brave and devoted husband.  She is smart and funny and thoughtful, and a true realist.  In her words today, she conveyed recognition of the reality of her situation, while at the same time demonstrating her unrelenting will to fight on, to take the drugs and the accompanying beat-down, to take it all on in the hopes of reversing or postponing the progress of her disease.  She has reached a point, it seems, where she is facing her situation with eyes wide open, and arms outstretched, embracing everything for which she has to be thankful.

I only wish that I had some of Sarah’s courage.  In comparison, I feel like I have kept my head in the sand, my eyes squeezed shut tight, my fingers in my ears, refusing to even hear about my five-year survival rate.  Maybe now, three years out, (hopefully) plowing ahead uneventfully to the magic five-year finish line, I am able to muster a bit of retroactive courage, and absorb the reality of a 30% survival rate.  Maybe now I will be better able to handle the shock when my doctor fills out the medical forms for our adoption application and writes “NO” next to the question, “Does the applicant have a normal life expectancy?”

The reality is, my doctor doesn’t know how long I will live.  I don’t even know how she will answer such a question.  Since diagnosis, all of my trends have been positive – no changes to my CA125; all scans and scopes have been clean and beautiful; I am fit and active, pain-free, sleeping well.  How ironic:  I am the picture of health.

Last night, Lemondrop related how it wasn’t until very recently that she finally confronted the reality that her cancer could have actually killed her, that it has killed other women in her very same shoes.  When we are diagnosed, we can play amazing mind games, engage in little psychic tricks to insulate us from the stark reality of the potential toll of our disease.  Ultimately, though, the reality will strike us, and we’re left to find a way to manage to the sheer terror which accompanies it.

As I sit here, hours after reading Sarah’s post, I am haunted by her images, and can’t help but think about the irony of the peace and acceptance that comes with finally being able see her final destination, however far off in the distance it may be.  The rest of us, drifting and rudderless toward an undefined point on the horizon, could stand to learn from her.

8 Responses to no line on the horizon