my left foot (or, what’s compulsive after cancer?)

Today started with barking, dog wrestling and a power outage.  We just spent ten days taking care of our friends’ Pomapoo, who loved to begin each day with a vigorous yet playful attack on our own aging basset hound.  High-pitched barking, the works.  Fine, whatever.  You get used to it.  People can get used to just about anything.  Isn’t that one of the main lessons of cancer? 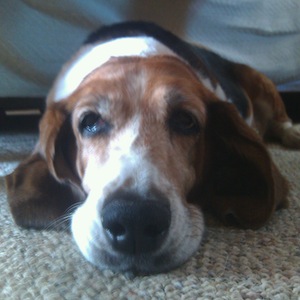 So I was out of bed at 7 AM on a holiday – also fine, as it was destined to be another insanely perfect day.  Sunny, breezy, low humidity.  Perfect weather, in fact, for doing just about anything outside.  Saturday I ran 5.18 miles; yesterday Mike and I rode forty with a friend, training for the MS 150 in a few weeks.  On days like these, I actually delight in being up and moving around as early as possible – more of the day to enjoy.

I prepared a pot of coffee with chicory to brew, and a few minutes later, the water still percolating, there came a tremendous explosion outside.  First I thought gunshots (that’s what 15 years of city living will do to you) then quickly realized that the coffee maker had shut off.  I heard wires sizzling nearby.  Blown transformer.  Quick call to PSE&G to alert them to the situation, then I wondered, what to do on this odd morning, other than sit around and worry about everything in the fridge going bad?

After a few minutes of huddling and snuggling under the covers, enjoying the nascent fall chill in the air, I said to Mike, “I was thinking about going for a run.”  My thought process:  I’m pumped up from my earlier run and ride this weekend, the weather is perfect, and pacing around the house waiting for the power to come back on isn’t going to do me any good.

Mike’s thought?  “You’re a bit compulsive with the working out.”

I bristled; we went back and forth – he retracting his comment (which he had apparently also made to my friend on our ride yesterday), me insisting I wasn’t angry, even though I was.  Telling him he was entitled to his opinion, even though he was wrong.  “You don’t know from compulsive,” I told him, thinking of the people I know who obsessively run and spin and swim and compete in triathlons and trail rides and runs and on and on.  In the end, I said simply, “It’s not just about working out obsessively.  It’s about how it makes me feel, mentally and physically, it’s about my life recovering from cancer, surviving.  It’s all of that.”

I don’t really know that I can ever adequately explain the need I have to regularly, religiously, push and challenge my body, why I feel the need to pound the pavement when I’ve had consecutive strenuous workouts on the two previous days.  The process, the effect, just isn’t the same, unless you know what it’s like to have every last ounce of energy and will drained out of you.  If you have, you know how precious the feeling of invigoration and rejuvenation is, how much you treasure each miraculous thing your body is still able to do.

But there’s more to it.  There’s more, because even after everything, I am still able.  I still have the capacity to push myself.  I have been almost entirely rehabilitated.  I may even be stronger than I have ever been.  But not everyone is so lucky.  Not everyone whose life has been capsized by cancer is fortunate enough to get to the place I am now.  Some people fight briefly and fiercely, and die.  Some people fight long and hard, and are left with limitations that render them a shadow of their former selves.  Some people are pushing themselves to their new-found limits, all the while wondering: how many weeks, months, years do I have left?

This morning, just before the transformer blew out around the corner, I was checking my (scanty) Twitter feed, and came across this article, courtesy of one of my ovarian sisters, Sarah.  Like the woman in the story she shared, Sarah is fighting fiercely while raising two children.  Her treatment is constantly changing, and her prognosis is…?  Honestly, almost three years after my own diagnosis, I still don’t know what “prognosis” really means, or what my own is.  Maybe that’s part of the reason a cancer diagnosis can feel like a one-way ticket down the rabbit hole.

I didn’t have children when I was diagnosed, and whenever I hear stories of people who are fighting cancer while raising a family, I am astounded.  And I am also thankful.  While I grieve for the biological children I will never have, I don’t think I would have had the strength to manage my illness while trying to take care of my kids.

So the truth is, every time I get on my bike, or run out my front door, I am doing it not just for me, but for everyone else who is still fighting, or who fought and lost.  It’s not just about me; it’s about all of us.

Our adoption application arrived in the mail on Friday.  We’re really going to do this. We’re ready.  The paperwork is endless; some of the questions, disquieting.

There’s a medical section, of course, and my doctor has to answer this question:  “Does patient have normal life expectancy?”  There are only two suggested answers:  YES or NO.  Black, white.  No shades of gray to account for the on-going surveillance I receive because of my genetic mutation (how’s that for a mixed blessing?);  the fact that my grandmother lived to be 93;  that my mother is pushing 70 after multiple cancer diagnoses.  Honestly, I have no idea what my doctor’s answer will be.

Just when I start to feel like cancer is in the rearview mirror, ancient history, I am confronted by something like a question about my life expectancy, and suddenly it’s front and center once again. 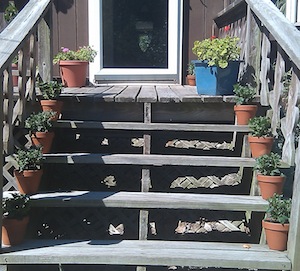 I ended up not running today.  Instead, I potted some mums and did a few hours of other yard work – weed whacking, mowing, watering.  I came in for lunch, took off my shoes, and felt this intermittent buzzing in my left foot.  The neuropathy which plagued me for so long after treatment has almost completely resolved, but my left foot remains quirky. There is periodic joint pain emanating from a few places along my insole, and today, this nervy buzzing.  I described it to Mike: “It feels like a phone is ringing in my foot.”  At four or five second intervals, the buzz kicks in.  It’s been buzzing all day, and like with a muscle twitch in my eye, I’ve said to myself, “Well, I guess it’s just going to be this way forever.” 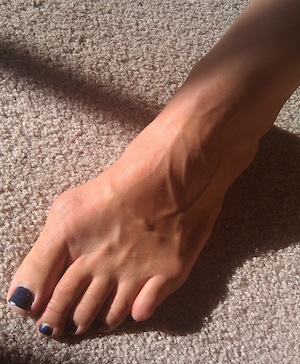 It won’t be.  Like the other discomfort in my extremities, residual from chemo, it will resolve.  But like so many other reminders, it will creep back once in awhile.  In the end, I will never completely escape the memories.

4 Responses to my left foot (or, what’s compulsive after cancer?)