back in the saddle, back from the dead

This morning, as I rode my bike through the corner of South Jersey that I now call home, the sound of the cicadas in the trees took me back to a very particular place:  Main Line YMCA day camp, about thirty years ago.  I remembered the prickly heat of summer on my young skin, and, in particular, the torment of swimming classes and archery lessons.  Even seemingly innocuous games like Red Rover and Red Light, Green Light were a challenge for my decidedly unathletic self.

Summers were awkward times for a child like me – summer being the time when we children were set free from the soul-deadening confines of the classroom, let loose to run and swim and play various forms of ball, to get in touch with our more primal selves, like the sprites we were supposedly meant to be.  Fortunately, I eventually found my place among the slightly more off-beat, “creative” types, and eventually spent many happy summers in theater camps and programs where my lack of athleticism wasn’t an issue.

In spite of my lack of natural athletic skill, I had managed, long before cancer struck me in my mid-thirties, to find a level of fitness and physical activity that suited me.  While I never had the kind of coordination and agility required for most team sports, I did manage – over the years – to transform myself into a relatively fit, strong young woman.  At some point, I think when I returned to Philadelphia for law school about fifteen years ago, I became enamored of cycling. Living on the edge of Fairmount Park and its endless trails, there was an inevitability to it.  Cycling just seemed to suit my mind-set as well as my body type.  It fast became a passion.

In 2001, I rode in my first-ever MS 150 City to Shore Bike Tour – two 75 mile days of riding from just outside Philadelphia to Ocean City on the Jersey shore, and back again.  I will never forget that ride.  I didn’t have a riding partner, I wasn’t part of a team.  It was just me, and several thousand other riders – some hard-core, many extremely laid-back, most, like me, somewhere in the middle.  The first day was brilliant and sunny, and Mike met me in Ocean City for the night.  The second day, we woke in the dark to driving rain and wind – the conditions in which I was destined to ride 75 miles back to the city.

I had never ridden in weather like that, but I found myself in a hyper-focused, determined state of mind that propelled me from one rest stop to the next, as I watched other riders pack it up and hop on the sag wagons.  There was no shame in that; people were wiping out, the roads were treacherous.  But for me, for reasons I couldn’t even articulate, stopping was not an option.  Giving up wasn’t in the cards. The best logic I could come up with was, “Well, I’m already wet and freezing.  What good is stopping going to do me?”

I ultimately crossed the finish line a sopping, ice-cold mess.  Mike and his mother, who has MS, met me, and when I pulled my shoes and socks off in the back seat of the car, I discovered my toes stained blue from the dye in my socks.  They wrapped me in blankets, drove me home, and I slept that night for about 18 hours.

For years after, that one hellacious day of riding was always the benchmark, the standard by which I would gauge any test of my physical stamina.  Nothing else ever really came close; having done something so slightly insane during my first ever organized ride, it seemed quite literally that there was nothing I couldn’t do.

It’s a mantra that has stayed with me, and gained even more significance since cancer.  Perhaps that attitude is what made me gravitate toward running when I began my rehabilitation after treatment.  Biking was easy; running was hard.  Naturally, then, I should be running.

Running has done amazing things for my mind and body.  What I see now, as I prepare for my first organized ride in years, for the American Cancer Society, is how the discipline I have maintained with running for the last year and a half has also made me a stronger rider. Even though I went a prolonged period of time – over two years – without riding regularly, now that I am back in the saddle, muscle memory is kicking in, and the love I have for being on a bike is resurgent.

Saturday morning, I set out on a long solo training ride. Following a cue sheet from a previous MS 150, I cruised along the increasingly familiar roads of my new neighborhood, heading east toward the less populated areas of Marlton and Medford, and finally into Atco.  About six miles into my ride, I picked up another lone rider.  He was not familiar with the less-travelled roads, and was happy to let me guide him.  So we rode together for most of the rest of my intended route, and picked up a third rider on our way back toward home – a fellow who had somehow gotten himself out to Marlton Lakes but wasn’t quite sure how to get back to “civilization.”

It was a fantastic feeling, leading these two strangers with confidence and strength.  Biking is a solitary sport, and even when we ride together, there is something about each of us traveling alone, on our own road.  These two people needed guidance, and I was able to provide it, as my own legs powered me across the miles.

Before I met up with my unexpected riding partner, I found myself thinking about what it had drawn me to cycling all those years ago.  Something about the speed, the breeze, the motion of the wheels, the silence in my mind.  I need music to propel me through my runs; cycling has always been an opportunity to allow my own thoughts, my own music to flow from my mind.  My mind can be clear, like a meditation, or buzzing with activity.  I can sing while I ride, feel the songs that rise up from my heart. 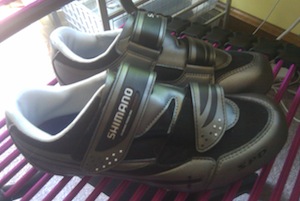 After my long ride on Saturday, my relatively minimal anxiety about the ACS ride next weekend was put to rest.  I thought of how I fought my way through seven hours of riding in the rain on that ridiculous second day in 2001, and how I have fought my way back from the edge of death.  There is nothing I can’t do.

4 Responses to back in the saddle, back from the dead