does my cancer offend you? tough s*&#!

I generally don’t spend much time reading random comments from anonymous folks on the Internet – in response to blogs, news bits, whatever – but today, I took a peek over at my ovarian sister Donna Trussell‘s latest cartoon, and was downright astounded by some of the comments it provoked. 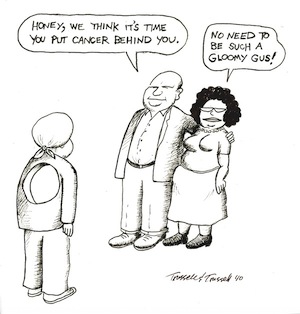 I have to admit, when I first looked at the cartoon, I didn’t get it.  Sometimes, my brain just doesn’t grasp meanings that are plain as day to other people.  This is the same cognitive quirk that caused me to have to take the bar exam three times.  So, I looked at this image, and first I thought the couple facing us were talking to each other, not the person in the cap with a giant hole in her (him?)  I saw the cap, and thought, is that a surgeon?  I thought the woman with the hair was the one with cancer.  I just didn’t know exactly what I was looking at.

Plenty of other folks, apparently, did, and had lots to say about what they saw.  I quickly scanned the comments, and should not have been surprised to see that this simple cartoon caused people to go off on all kinds of tangents about health care reform, Iraq, Bush, Obama (one person even went so far as to refer to our President as “the cancer in the White House”) and the appropriate ways of managing your cancer in public.  Spend five minutes reading comments like this from a cross-section of semi-literate Americans, and you will quickly see what a totally fucked up world we live in.

One comment in particular riled me.  Here it is:

My mother-in-law survived two bouts with cancer – lung and brain – and never once felt the need to run around with a bandana on her bald head. She wore a wig, kept this personal health matter to herself, and never felt the need to demand unsolicited sympathy from strangers.

Wow.  I mean, just plain WOW.  Let’s skip right past the oxymoron of “demanding unsolicited sympathy.”  First, I am fascinated to know what is going on in the mind of the person who looks at this cartoon and chooses to focus on the bandana – which I first interpreted as a surgical cap.  Second, how exactly does this person propose that cancer patients “keep their personal health matters to themselves,” and why exactly is that a more appropriate response to this wretched disease than being open about it?

Hours after reading this comment, it continued to irk me.  I thought about it while I walked the dog around the neighborhood on this glorious, sunny evening.  What is going on with this person?

It occurred to me after a moment of reflection that what’s going on is that he/she is made uncomfortable by the fact of someone facing cancer – a loved one, a stranger, whoever.  In this person’s mind, then, when I went to Wegman’s with my bald head and my yellow Livestrong bracelet, with my shorts falling down around my knees because I had lost so much weight, I was being disrespectful of other people’s right not to have to deal with the fact that people get cancer.  I am kind of wondering if that right is some kind of weird inverse of the right to privacy inherent in the Due Process Clause of the Fourteenth Amendment.

So, I guess I would like to take this opportunity to apologize to all of the hundreds of people I came into contact with during my illness.  All of the people at Phillies games and restaurants and shops and the gym who had to be confronted with my bald head, my pale skin, my Bob Geldof in “The Wall”-esque lack of eyebrows.  I am just so sorry.

I don’t usually resort to out and out sarcasm in response to ideas that I find totally repugnant, but it somehow just seems so appropriate in this context.  The truth is, choosing to be a bald chick during cancer was, I guess, a conscious choice, but mostly because I just didn’t have the stamina or  the desire to try and devote what little energy I had to trying to make myself look like something other than what I was.  I have never been much for makeup.  For me, with rare exception, it’s always been, “What you see is what you get,” and I wasn’t about to change my philosophy of personal appearance just because I was sick, and certainly not to try and shield the world around me from the reality of my illness.

During much of treatment, with cool hats and scarves and a heightened appreciation for accessories (long live big chunky earrings!) I was able to maintain a certain sense of style and dignity that was consistent with how I have always presented myself. 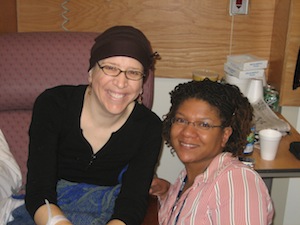 By the end of treatment, though, it became increasingly difficult to obscure the ravages of chemo and I freely admit that by June 11, 2008, I was looking downright ghostly. 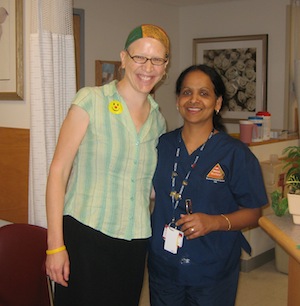 I get that cancer is scary.  I really do.  But what I don’t understand is someone who thinks that people who opt not to try and mask the toll which it takes on their physical appearance are “demanding unsolicited sympathy from strangers.”  On the contrary, one of the things that so enraged me when I was sick WAS that very unsolicited sympathy – the slightly tilted head while asking, “How ARE you?”  Or just plain pitying looks.

I can’t speak for all cancer patients, but for me, the hardest part of being sick was just trying to engage in daily activities without constantly confronting my disease.  And I can’t say for sure, but I bet what I went through is a damn sight more unpleasant than having to look at some bald chick wearing a bandana.

The funny thing is, no matter what I look like now, I still had cancer.  I still have the HNPCC genetic mutation.  I am at increased risk for other cancers.  And that’s a reality that all the curls in the world will never change. 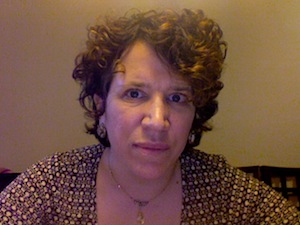 6 Responses to does my cancer offend you? tough s*&#!