the lynch syndrome, with apologies 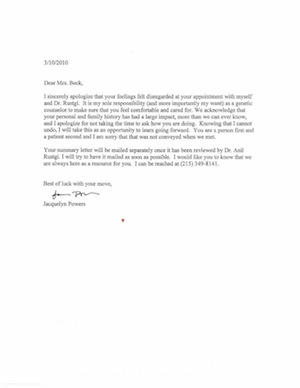 Some things are just plain unexpected.  Or are they?

Yesterday, when the rain-soaked mail fell through the slot in the front door, I discovered a thin envelope from Penn GI Genetics – far too thin to be the packet of materials I was told would be coming my way within the next few weeks (do I get a membership card for the HNPCC club, I wonder?)  It was addressed to “Mrs. Emily Beck” (HA!) in small, tight handwriting, the letters smudged from the moisture.

I opened it up, and found, not entirely to my surprise, a typed note – not on letterhead – from the genetics counselor on whom I unloaded last week when she delivered the news of my test results.  It was not, as I have mentioned previously, the test results (which were expected) that had me worked up, but rather a month’s worth of simmering anger over the lack of humanity which I felt the genetics team displayed when I met with them.

The letter, then, was the counselor’s attempt to apologize for (what I characterized as) failing to consider the emotional impact of a cancer diagnosis  – not to mention the now-confirmed increased potential for more cancer down the road.  It was a “teachable moment,” I guess, and presumably she shared my comments with the other members of her team.  My original motive in communicating my displeasure to her was to simply unburden myself of this ill feeling, but now, I am wondering if perhaps, in some small way, patients who visit the genetics team in the future might be approached with just a bit more compassion.

In other news, my recent post generated a reply from a woman named Linda who is affiliated with a group called Lynch Syndrome International (which to me sounds like a spy movie staring Matt Damon.)  The group is dedicated to increasing public awareness of the HNPCC mutation, and encourages people to be familiar with their family medical histories and, if appropriate, to be screened and tested for the gene. So I just wanted take this opportunity to say HURRAH for Linda and her crew, one more battalion in the war against stupid effing cancer.