The holiday season is finally over.  That seemingly endless stretch starting with Thanksgiving and ending with New Year’s has come and gone, and here I sit, wearing my favorite fleece pants and my re-imagined fuzzy purple cancer socks, listening to the wind howl outside my window.  The lights are still on the tree, but the festive glow is dimming, and an expanse of long, cold months lies ahead.

Last year at this time, I took a serious plunge into darkness.  Now, though, I feel the strength at my core expanding each day.  I am anxiously awaiting – rather than fearing – what comes next, and I am looking back over the past six weeks, feeling blessed.

One of my extremely funny cancer friends wrote on her own blog that, “I started my holiday toast with ‘Here’s to another Christmas I’m not dead!'”  While I didn’t have the chutzpah to pull a similar stunt at my family’s Christmas dinner, the sentiment was very much on my mind, and was perhaps what motivated my relentlessly light-hearted feeling all through the season.

I remember my father, in the immediate aftermath of my diagnosis, saying that he knew that everything was going to be “just fine” (code, I assume, for “I am not worried you are going to die.”)  It was great to hear at the time, but in hindsight I wonder exactly how he knew that.  Just because my mom survived ovarian cancer in 1989 didn’t necessarily mean that the same fate was in store for me.  I mean, “Stage III” is not exactly what you want to hear accompanying a diagnosis of ovarian cancer.  I never once assumed that my survival was a given.  When my husband and I started making videos to memorialize my treatment experience, I once said to him, semi-seriously, “You’re not going to play these at my funeral, are you?”

The Christmas immediately following my diagnosis, while I recovered from surgery, my family spent the holiday on the beach in St. Lucia.  Back in Philadelphia, I made a lasagna and we had our Jewish friends over for dinner.  It was peculiar, to say the least. But now it is two years later, and this holiday season featured two wickedly awesome kitchen dance parties, magical opportunities for me and my sister to commune and laugh and drink together, while family and guests floated around us. Both Thanksgiving (here at home) and Christmas (in New York), I was able to bask in the glow that really does come from being with the people most dear to you, and reflect on how strong and calm I am feeling now.  I don’t really remember what the holidays were like before cancer, but I certainly don’t recall them ever feeling this good.

Another clear memory came back to me this season:  the fear I had of not living to see my nephew grow up.  He was three when I was diagnosed, and certainly not old enough to understand what I was going through, though the thought of him being afraid of me as I went bald and lost weight broke my heart.  Now, he is five and a half, and I have been able to watch him turn into a real little boy, with whom I can have long (usually hysterical) conversations, in addition to building with Legos and Magna-tiles.  Best of all, in the midst of the Christmas food preparation, I was able to give him a slightly intoxicated (me, not him) lesson in ’70’s dance moves as we shook our booties to The Clash’s “Magnificent Seven.”  Watching him break out into a huge, mischievous smile as he swung his shoulders sassily back and forth, in imitation of my own goofy moves, was probably the best Christmas gift I have ever received.

What I noticed throughout these holidays, as that moment with Oscar exemplifies, is how grateful I am for simple things.  The real gifts this year didn’t come in packages.  Finally brining my dog to New York, and walking her in Central Park; taking a Christmas Day run with my sister after the turkey went in the oven; going to the movies with Oscar and sharing popcorn  – these were all moments that filled my heart with an unadulterated bliss that I don’t think I ever knew before my illness. 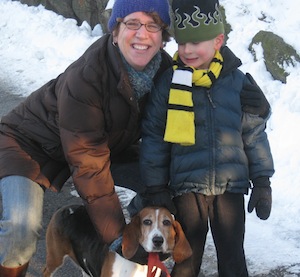 While so much of what I experience now remains framed by cancer – at least in the quiet of my own mind – I still have mixed feeling about how much attention I want paid to the fact of my survival, my rehabilitation, the journey  I have made back to the land of the living.  It’s possible, I suppose, that the people who surrounded me during my illness didn’t observe its toll on me the same way I experienced it.  I look back, and I can’t even recognize the person I was during that time.  Perhaps my friends and family still saw me, just – diminished.

So when Christmas dinner featured a truly special guest – Double-Oh Seven, one of my climbing mates from First Descents this past summer – I was sort of hoping, in a way, that him joining us would prompt a conversation about cancer, about what my friend and I had both been through, and some acknowledgment of how massively we are both now kicking ass.  I love the way life has “normalized” over the past year, but every once in awhile, especially when the fact of my cancer is being so dramatically underscored by the presence of someone who I would never have known, but for my illness, I crave a little recognition.

For one reason or another, though, things didn’t unfold that way at Christmas dinner (seriously, who wants to talk about cancer at Christmas dinner?), but rather we all simply sat and talked and drank and reveled in the glow that comes from the essential fact of how good it feels to connect, and feel love, over a holiday meal. 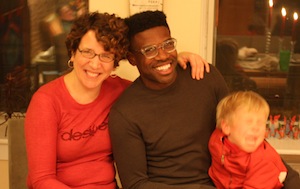 Simplicity bred still more joy on New Year’s Eve – a real death-trap of a manufactured holiday, in many people’s estimation, and not without good reason.  Two years ago, I struggled to celebrate the dawn of 2008 at our neighbor’s house, knowing that the next morning I would wake up to face a day of bowel prep for the second act of my hysterectomy.  Lots of us feel ambivalent about New Year’s Eve – that one, needless to say, was a new low.

What a contrast, then, was found in the delightful simplicity of this year’s ringing in  – a miserable, rainy night, spent in the warm glow of our friend’s fireplace, with abundant alcohol, sinful dessert and dogs aplenty.  We downed shot after shot of Jose Cuervo Tradicional, and I thought, for a brief moment, of a gathering with these same friends during the waning moment of my course of treatment, when I treated myself to a single shot of tequila, violating my own strict no-alcohol policy.  What a reluctant, guilty pleasure it was back then, when all I could think about was my white blood cell count, and what a free-wheeling bit of recklessness it was on New Year’s Eve.  And what a joy, really, to be able to let my guard down, to be able to trust my body, and not fear the consequence of every single defiance of the strictures imposed by my illness.  What an amazing thing, simply to be able to celebrate, freely, without inhibition, and to have the energy to do so.  These again are things I will never, ever take for granted. 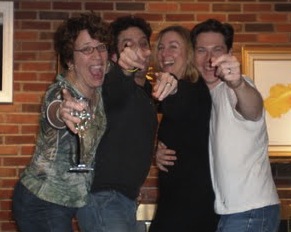 So yes, if I may borrow my friend Chris’s sentiment, here’s to another Christmas when I am not dead.  My suspicion is that with each passing year, I will learn a little bit more about the place that cancer occupies in my life.  For the moment, though, I am just thrilled to be living it.