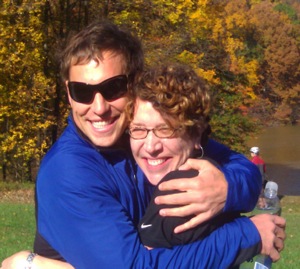 Aiming for a snapshot of the weekend, hoping to convey some measure of the love and energy which First Descents generates, I’ll start right here – me and Flippy Floppy, after the Alan Goldberg Walk for Life in the far reaches of Rock Creek Park, clowning, and holding on tight.  I love this picture because to me, the purity of the joy we all share with each other fairly leaps from the frame.

The weekend was, predictably, a blur, but a delightful, rejuvenating one.  I came out of the Ballston Metro station yesterday afternoon into a torrential downpour.  The air was saturated, my clothes sticking to me.  I ran out into the rain, skipping almost, hailed a taxi, and ten minutes later walked into the Arlington Cinema and Draft House, to find Brad on-stage, describing First Descents, talking about the campers who were present that evening.  “And here comes another one,” he added as I entered the theater, and moments later Huggles popped up and wrapped me in one of her trademark embraces.  It was good to be home.

New bonds were formed, also as expected, almost immediately, with campers from other programs. Before First Descents (read: before cancer), I had never had the experience of meeting people and in an instant, feeling completely at ease and understood.  But with these people, in this universe, it is virtually a given.

I had the great good fortune of sharing this exhilarating 24 hours not only with my new family, but also with one of my oldest and dearest friends.  Kate and I love to tell people how we have known each other since fourth grade (if pressed for details, we’ll even talk about the class we took together at the Wayne Art Center in the summer of 1981).  Few relationships endure like that, but Kate and I have remained connected across years and distance – a fact for which I am always grateful, and which I never, ever take for granted. 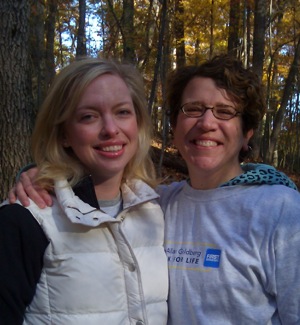 It sometimes feels like my life is neatly divided:  Before Cancer, After Cancer.  Kate, who has known me longer than almost anyone, and has remained constant through it all, walked with me today in Alan’s memory, along side my First Descents family.  On that path in the woods, I felt a new sense of completeness, of wholeness, of all of my life flowing together in one continuum.  There is a fluidity, a rhythm to my experience, and I get to claim all of it – the innocence that existed before my illness, the fear and uncertainty that threatened to consume me, and the joy that is now unfolding.

It all belongs to me.

One Response to the unfolding