still champions: a look back at the ’08 phils (and emily) 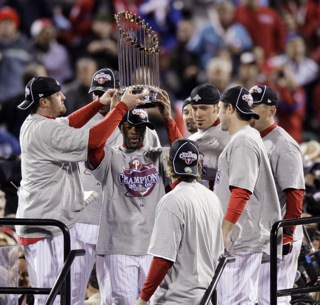 Last night – sometime after 2 AM Eastern Time – my beloved Phillies pulled out an extremely improbable win against the Colorado Rockies in a pivotal Game Three of the NLDS.  I finally drifted off to sleep just as Matt Stairs struck out with two men on to end the top of the eighth, and at that moment, I will confess, my hopes for a win were all but snuffed out.  But when the alarm went off just a few hours later, I was stunned to learn not only that the Phillies had prevailed, 6-5, on a ninth inning sacrifice fly by Ryan Howard (“fuck yeah!”), but that much-maligned Brad Lidge had in fact, as Scott Franzke put it, “walked the tight rope” to preserve the win.

Now, then, seems an appropriate time to republish something I wrote at this exact moment during last year’s playoff run, as the Phillies were fighting their way to their first World Series title in 28 years.  For me, and for the Phillies, things look much different now than they did a year ago.  Then, it was all about beating the odds.  Now, it’s about finding a way to sustain the notion that they  – we – are still champions.

Many of you have probably gathered by this point that, well, I love baseball. No, I don’t think you understand: I REALLY love baseball. I always have, ever since I started going to games at the age of three. I inherited my love of the game from my father. Who knows why I got the baseball gene and my sister didn’t. Maybe for the same reason I got the cancer gene and she didn’t.

The Phillies teams of the ’70’s, when I first started going to games with my family, were fearsome, powerful and made the playoffs for many successive seasons. When I was 8, in 1980, they won their first and only World Series. And the city has been waiting for another Championship Season ever since.

Last year, for the first time in 14 years, the Phillies made it back to the post-season. The city was jubilant, and I wept at the final out of the last game of the season when they clinched the division. The team then quickly flamed out in three horrific games in the first round. End of dream.

Two months later, I was diagnosed with cancer. Forget baseball. Forget just about everything, thanks very much, and save my life, please. Christmas, New Year’s – surgery, followed by more surgery. It was a bleak winter. I have always disliked the winter months, in part because of the absence of baseball, but last winter, well, that was a shit-storm of an utterly new variety.

Chemo started in February, the same time players reported to Florida for Spring Training. I quickly adorned my “cancer book” (a giant three-ring binder containing the endless piles of paperwork associate with my illness) with a local newspaper cover featuring my favorite Phillie, wily, wizened left-handed pitching illusionist Jamie Moyer – at 45, the oldest player in all of baseball. His Zen-like, clear-eyed intensity fast became a source of inspiration and motivation to me as I battled my disease. One pitch, one day, one treatment, one game at a time. Statistics are meaningless. Make your pitches. Keep your opponent off-balance. Defy expectations. Block out the noise. Follow your Third Eye. What works in baseball so often applies to life in general – and fighting cancer in particular.

The season unfolded, with the Phillies starting strong, but, as always, giving their fans plenty of reason to doubt them. Then, a few months in to the season, something strange happened. My father, sick with pneumonia while his wife and daughter underwent chemo at the same time – a dark time for the family, needless to say – prophesied that the Phillies would make it to the World Series this year. When I heard him say this, I chalked it up to the fevered ramblings of a man under a great deal of stress. Get some rest, Dad. You’ll feel better soon.

As the season wore on – ups and downs, winning streaks followed by losing streaks – so did my journey through chemo. The roller-coaster rocked me almost every day. I reported for treatments always carrying with me a baseball signed by Jamie Moyer, and as the drugs coursed through my body, I ruminated on his attitude toward the game, and made it mine towards cancer. Statistics are meaningless. Make your pitches. Block out the noise. Baffle your opponent. Stay in the moment.

The Phillies were briliant in May, and wretched in June. I was wretched most of the time. But we were on the roller-coaster together, linked in some kind of karmic dance. My dad’s premonition was always in the back of my mind: The Phillies will make it all the way. And so will I. Chemo ended in June, and the rebuilding began; an entirely new struggle, but I fought on, enduring ever more highs and lows. Just like my team.

The end of the season closed in, with the Phillies hanging on to a slim lead in the division. Last Saturday, September 27, they needed one more win to clinch the division and advance to the play-offs. I was there. Jamie Moyer was on the mound. Buddha, God, Allah – whomever – they were all looking down on Citizens Bank Park, smiling knowingly.

Jamie was brilliant, pitching in his inimitable, Zen-like way, and the Phillies, after a tumultuous ninth inning, emerged victorious and clinched the NL East Division Championship. The first step along the way to – just maybe – fulfilling my dad’s premonition.

After the you-had-to-see-it-to-believe-it double-play that ended the game, the ballpark erupted. Fireworks went off. Rally towels failed. Neighbors hugged. And amidst all of it, I started to cry. I felt the long, tortured season – my season of cancer and chemo, the Phillies’ season of parallel ups and downs – come rushing at me. I thought of my dad’s premonition. I thought of the wisdom of Jamie – how I tossed his signed ball in my hands as I lay in my hospital bed during my seemingly endless over-night treatments. I thought of how hard I had fought over these many long months, and how far I had come.

My dear husband look over at me, saw the tears in my eyes, and gave me a huge smile. He hugged me for all he was worth, and I knew he understood.

Now, it is almost one week later, and the Phils are one win away from moving on to the National League Championship Series. On the one hand, given their hard-luck history as a franchise, I can hardly believe it. On the other hand, I feel quite strongly that this year, of all years, we – my beloved team and I – are destined to be winners.

One Response to still champions: a look back at the ’08 phils (and emily)