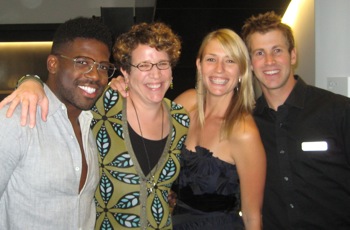 What follows is a slightly more formal version of the remarks I delivered in Denver, CO last night at the First Descents fundraiser at the Museum of Contemporary Art.  It was a magical night that reenforced my commitment to this remarkable organization and the work it is doing to restore strength and dignity to the young adult cancer population.

When I packed my bags for Jackson at the end of August, I had no idea what to expect.  I knew the simple facts:  I would be rock-climbing with other young adult cancer survivors for a week.  It sounded challenging; I did not expect it to be life-changing.  This in spite of the fact that the few other people I had spoken to about their experiences with First Descents did in fact say things like, “It will change your life.”  My own natural cynicism, and perhaps some of the hardness resulting from my experience with cancer, kept me from believing that First Descents could really be “all that.”  Cancer had changed my life; I was not prepared to undergo another radical transformation of my sense of self and my place in the world less than two years after being diagnosed.

So much for that.

One of the hardest things about being a young adult with cancer is feeling completely and utterly alone.  That there is no one else like you, no one else who understands what it means to be young, vibrant and dreaming of your future at the exact moment your oncologist tells you that you have cancer.  In our chemo suites and doctors offices, we are easily decades younger than most of the other patients.  My hospital – a renowned cancer center in a major urban area – never even offered an in-person support group for people my age, but rather insisted that “we” preferred to make connections virtually.  When you are a young adult, everyone in your life has a cancer story, but usually those stories involve an elderly relative, not a best friend from high school.  As young adults with cancer, we are made to feel invisible.

So when I boarded my plane from Denver to Jackson, I immediately took note of my fellow passengers and tried to pick out potential campers.  Sure enough, it happened, and as soon as I spotted Fiery – with her red hair, just growing in post-chemo, and the “Stupid Cancer!” button affixed to her backpack – I was comforted.  Finally, I thought to myself, I am going to be surrounded by people like me, people who will understand my fears and frustrations, my sense of isolation.  Finally, I am not alone.

At baggage claim in Jackson, I was magnetically drawn to an incredibly nice-looking group of young people standing in a loose circle.  After hesitating a moment, I approached them.  “Are you, um….?”  I made eye contact with a tall, slender blonde woman.

“Oh great, hi, I’m Huggle Bumps.”  We shook hands, and she gestured to a handsome man across from her.  “And this is Flippy Floppy.”  I struggled to process this information.  My face undoubtedly registered my confusion.

Suddenly, the others gathered started to introduce themselves.  “Hi, I’m Slow Boat.”  Excuse me?  OK, I was with a bunch of people with cancer, which was great, but I was beginning to wonder what exactly I was in for.

When we arrived at Teton Science School, our home base for the week, my nervousness manifested itself in the form of irrational thoughts like, “I never went to overnight camp.  I don’t know how to do this.  I want my mommy!”  My roommates and I all unpacked together in a somewhat awkward but collegial silence, occasionally asking each other questions about where we were from, our diagnoses and our families.  There was a sense of anticipation in the air during that first afternoon, but it was also quite clear:  we were all far from home and we were in for something quite unexpected.

I was immediately surprised and pleased to discover that there would be no designated time for us all to sit around and “talk about cancer.”  The nightly campfires provided an opportunity to laugh, be extremely vulgar and reflect on the day’s events, but there was never a sense that we were required to talk about cancer.  Instead, so much of the beauty of the week lay in the ways in which conversations would occur spontaneously – over a meal, on a hike or a jog, at the swing set.  There was an organic rhythm to the way in which we were able to share our stories, and find common ground.  There was pulse of connectivity around our cancer, and as the week unfolded, the pulse strengthened and quickened, and drew us closer to each other.

And then there was the rock.  It’s easy, I think, to consider First Descents, and understand the metaphors at work.  Take young people whose lives have been upended by cancer, whose strength and stamina and very life-force has been drained out of them, and give them an opportunity to face physical challenges, overcome them and understand how strong they really are –  still are – even after everything they have been through.  It may not be rocket-science.  But this exercise, this theory, has the power to truly rehabilitate battered bodies and bruised spirits.  It can make whole once again people who have been so utterly diminished by their battles with cancer.

The first full day of climbing, we were split into smaller groups of four or five campers, each working with a pair of guides.  Having never climbed before, I was excited, but a bit anxious.  We were climbing a series of pitches, working our way toward a steep repel.  One of the pitches, the second or third, was quite sheer, and the footholds were not obvious.  My hands were sweaty, and I couldn’t seem to find a grip.  I would try to secure my foot on the rock and pull myself up, but I couldn’t.  I slipped several times.  I heard my fellow campers at the top of the pitch, cheering me on, and I heard the guides, giving me tips about where to put my hands and feet, but I just couldn’t do it.  I was breathing hard, shaking and sweating –  convinced I was going to be suspended from that belay for the rest of my life.  I would be hanging on that rock face, stranded, trapped in my own fear and weakness, forever.

That moment, of course, sent me right back to the darkest hour of my illness, when I was weak and frail, barely able to climb the two flights of stairs to my bedroom, when day after day the smallest physical challenge – walking the dog, watering the garden, taking a shower – left me short of breath, panicked and in tears.  I would end up pounding my fists in my pillow, choking on my own anger and sadness.

So, as I hung on that rope, slipping, struggling for a foothold, I relived this trauma, but was also, finally, after what felt like an eternity, able to reach back, into the deepest part of myself, and pull myself up, make it past the breaking point, and to the top of the pitch.  There I was, shaking, my heart racing, feeling it all, on that rock.  Best of all, though, was that one of my fellow campers, a much more experienced climber, was there to fold me into her arms and let me cry on her when I reached the top.  I didn’t have to explain a thing; she just understood.

In truth, I could tell dozens of stories illustrating the transformative power of our week in Jackson:  evenings by the campfire, a morning in the hot springs, afternoon jogs, moonlight hikes to the mountain top overlooking the valley.  In all of these moments, that pulse, that connection borne of our battles with cancer, drew us all to each other.  Love grew, and we didn’t even know it was happening.  It was inevitable.  We had come together, in that time and place, and were no longer alone.

When I returned home from camp, my mind buzzed twenty-four hours a day.  In my waking hours, I could scarcely wipe the smile from my face as I recalled – constantly, almost unconsciously – moments and laughter from our week, and pictured the faces of the people I had grown to love so intensely in such a short period of time.  In my dreams, I was with them, back on the rock, climbing a hilltop in the moonlight, laughing and embracing.  I was utterly besotted, like a love-struck teenager.

Those first days back on Planet Earth, my fellow campers and our counselors and I exchanged a dizzying whirlwind of emails – checking in, offering a joke or an update.  By the end of a day, I’d have a dozen emails piled in my inbox, and it tickled me to no end.  I loved seeing how we all yearned to nurture the connections we had formed during camp.  None of us, it seemed, wanted it to end.

But reality intrudes, and life goes on.  For me, I am happy to say, it’s been an extended high, as I have gained not only the love and friendship of a remarkable group of human beings, but because the sense of isolation which has so defined my psychic universe since being diagnosed with cancer has finally – and so forcefully – been alleviated.  And on our last night in Jackson, as we all stood, arm in arm, with candles lit, feeling these connections course through us, I honestly believed that I was being given the greatest gift in the world.  It was a miracle of humanity for which I will be forever grateful.