When I was diagnosed with cancer seven years ago, I inevitably became preoccupied with my own mortality.  The vibrant immediacy of the life I had been living before the moment of my diagnosis was eclipsed by the terrifying reality that my own end could be drawing near.  There was the bleakness, the fear that marked the actual period of my illness – the grueling treatment, followed by an at times even more punishing recovery.  And then, for months, even years following, there was this evolving melancholy that I could never quite shake, but which eventually transformed itself into a kind of blissed-out gratitude.  I was still here.  The years kept rolling by, I kept getting stronger, healthier and more alive than I’d ever been before my illness.  I finally became a parent.  Things felt bright and possible, life like an extended high.  Everything was sweet.

Recently, though, the brightness has felt dimmed.  Friends from First Descents camps are dying; I learn, through the mixed blessing of social media, that friends of friends are dying. And now, my mother-in-law, who has been living with MS for a quarter century, has been in a months-long cruel decline, and her prognosis seems mysterious and guarded.  Our world feels like a deathwatch, though it wouldn’t be surprising if she bounced back yet again and lived for years to come.  Through all this, we are raising our wild and wonderful three year old son, and so are feeling life’s extremes.  We are grappling with the mystery and sadness and confusion of what feels like a life in its final throes, while at the same time nurturing this young new spirit.  Trying to balance these poles of human experience has left my head spinning.

What is to be done?  As with my own illness, watching my mother-in-law’s struggles has caused life to feel like it is slowing down.  Time has become mutable and elastic, each day its own minefield of terrible possibilities.  There is the tendency to hold one’s breath, to wait for something that feels inevitable.  But in truth, what is most urgent is that we keep living our own lives, with as much purity of joy as we can manage.  Never is the necessity of living in the moment, of embracing what is present, more potent than when life’s precariousness threatens to swallow you whole.  We cannot ever know what lies ahead. THIS is all there is. 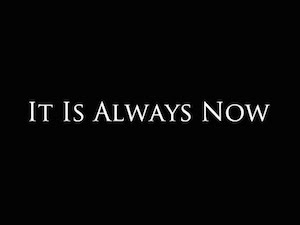 Perhaps, then, there is something to be learned from the beautiful and excruciating challenges of raising a child.  For a three year old, there is only NOW.  Whenever we mention something that will happen in the future – a babysitter coming, going to a playground – our son will immediately ask, “NOW?”  We are constantly trying to explain the distinction between the future – “SOON,” “LATER” – and the present: NOW.  For our boy, there is only NOW.

Those of us battling the bleak realities of death and suffering could stand to benefit from adopting this more myopic perspective.  What is anxiety, after all, other than fear of an unknown future?  I have deep concern for my mother-in-law’s health, and I am fearful that she will not recover from her current crisis.  But right now, I am here, writing these words. Breathing in and out, sending energy into the atmosphere.  Each night for the past few days, when I have closed my eyes to sleep, I have held this thought for my mother-in-law: May she find the strength she needs, or the peace to let go.  It is impossible to know which way things will turn.  Acceptance of either outcome is the place of peace I will continue to seek.  The gift of this moment is one I will strive to treasure.

This entry was posted in Death, Family. Bookmark the permalink.