serious (or funny?) as cancer 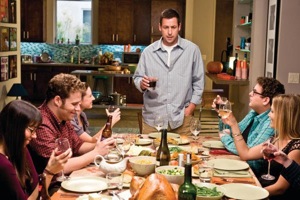 This question has been on my mind a lot in recent days, after seeing Judd Apatow’s sweet, sincere and yes, very funny FUNNY PEOPLE.  It stars Adam Sandler  in a remarkable, sad and I think very true performance as  a larger-than-life Hollywood star who lives alone in an enormous house.   His character, George Simmons, is diagnosed with AML in the film’s first minutes, is given a very grim prognosis and put on experimental medication (from Canada, of course.)   Some people might call this film a love-letter to the life of the stand-up comedy scene in LA, but for me (SURPRISE!) it was really about cancer, how it turns your life upside-down and what it means to try and reclaim your sense of self after the smoke clears.

I admit to squirming a bit in the film’s opening sequence.  Watching George receive the news of his diagnosis, my chest tightened a bit and I found myself shifting uneasily in my seat.  I could see his mind going blank as his doctor blathered on, spouting medical terminology and looking grim-faced.  (Been there, done that.)  While I (thankfully) wasn’t swarmed with fans who wanted to take my picture when I came out of my oncologist’s office on that dark night in December 2007, there was something alarmingly familiar about the far-off look in Sandler’s eye as he smiled emptily while putting his arm around a young admirer, just moments  after his diagnosis.

FUNNY PEOPLE, as you might expect, is a very funny movie.  But the humor comes mostly from a lot of penis and Jewish jokes, and the easy banter that emerges among the very talented actors.  The cancer plot, however, is largely unfunny, and depicted with an unsparing truthfulness.  George Simmons moves through despair, anger and ultimately, a kind of cynical (and slightly humorous) resignation.  The gore of treatment is confined to a relatively short montage of images – George puking in the toilet, staring blankly at the ceiling while having various needles stuck in his body, having a terrfied outburst when he finally realizes how the drugs are making him sicker than the cancer – but the emotional toll of his diagnosis is woven seamlessly through the story, as we watch him fumble his way back to “life” after he’s given a second chance.  He realizes that  people treat him differently once they think that his cancer experience is “over” (HA!), and that it’s not so easy to return to the land of the living after you have stared death in the face.

One of the things I loved most about the film was the ulimate amibiguity of what we are led to believe will happen with George and his health after the credits roll.  True, he’s given a new lease on life after a successful course of Canadian miracle drugs, but what interested me was the way he chose to share  – or not share – his good news with certain people as opposed to others.  A joke was made about how he didn’t want to “jinx” it, but the truth is, I think most people who have survived cancer can relate to that idea – joke or no joke.  No matter how many perfect rounds of bloodwork I get, and no matter how far I get from my diagnosis, there is always – lurking in the background – that sense of waiting for the other shoe to drop.  I don’t know if that was Apatow’s intent, but whether by accident or not, it is an important part of the cancer odyessy that I believe he got exactly right.

My sister’s neighbor is getting ready to shoot a “comedy” about colon cancer, starring Kate Hudson.  While I have an incredibly funny cancer pal who is living with stage IV colon cancer, I am not quite sure how this project will end up.  But I am all for movies that bring cancer into the light of day, and that are truthful  – and maybe even a little funny – in the process.

One Response to serious (or funny?) as cancer