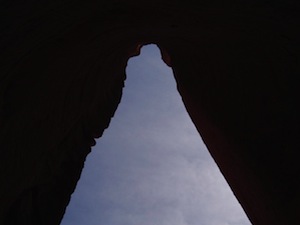 Words have never come with greater difficulty than they have in the weeks following the death of a fellow young adult cancer warrior with whom I shared an essential but hard to define connection.  I didn’t know her well, but her passing has had an unexpected, lingering resonance.  I am struggling to define what has had me rattled, and why.  Most of all, I am wary of making her death all about me.  As I attempted to memorialize her in my last post, I very consciously omitted anything that would take the focus away from honoring her and place it instead on my own sense of sadness and relived trauma.

Life is marching on here in the frozen first days of 2011, and because I want to live as fully and fearlessly as Chris encouraged us to do, I feel some powerful need to try and define and hopefully vanquish the demons who have been reaching for my heels, trying (and mostly failing) to pull me down into an abyss of haunted memories and paranoid imaginings.  I owe it to Chris – and myself – to shake this bastard loose.

Chris died just after Christmas.  A few days later, New Year’s Eve arrived, and I threw myself into revels with our nearest and dearest friends.  The evening had begun quite unexpectedly with a chance encounter with an old friend I hadn’t seen in over 15 years, and the warmth of her hugs and good wishes seemed a beautiful and perfect way to start the new year.  Of course there was too much drinking, but spirits were high – mine included.  It was a wonderful night (and early morning), which I of course regretted a bit the next day.  Hangovers feel a little too much like the aftermath of chemo. 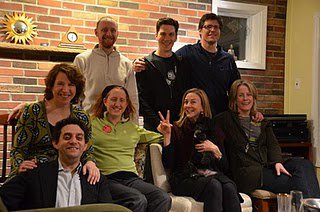 New Year’s Day, I nursed myself with an enormous batch of short ribs prepared in our new slow cooker, and on Sunday, as I anticipated returning to work after a deliciously long break, I shook off the inevitable malaise with my longest run yet, 9.5 completely kick-ass miles, after which it was hard not to feel utterly invincible.

Still, something lingered:  the cold, clammy hand of despair grasping at me; the tightness in my chest.  I was supposed to be living my life in Chris’s “big fat way;”  why did I feel so sad?

There is something inherently wrong, I told myself, about converting the tragedy of Chris’s death – she wasn’t even a close friend; I didn’t even know her very well, or for very long – into a study of my own post-traumatic stress.  From the moment of her diagnosis, she was set on a course of failed treatments, trials, surgeries and all of the accompanying indignities.  I have been fortunate enough to endure my own diagnosis and treatment “by the book” – responding well to chemo, successfully rehabilitating myself, returning to work, traveling, preparing to build my family and imagine a future.  I have all of those things which cancer stole from Chris and she never had a chance to reclaim.  I should be counting my blessings, not wallowing in self-pity.

It has finally occurred to me, though, that what has constricted my heart over these last few days is not so much about feeling sorry for myself as it is about reliving the terror of what happened to me, and facing the reality of just how close to the razor’s edge of death I actually came.  One false step – another few weeks, perhaps even days, before the fateful ultrasound that revealed my tumor – and instead of writing these words, I would be six feet under, or cast to the wind in a thousand directions over the waters of Long Beach Island.  Chris’s fate could have been mine.  As she left this world, as her cruel fate claimed her, the demons awoke again, and reached for me.  But they were shadows this time, without the strength they possessed three years ago, and thankfully, I was able to see that this time, I had the power to escape them.

To an outsider, to someone unfamiliar with the ties that bind we warriors together, the story of Chris’s death and the disorienting effect which it had on me might sound strange, even inappropriate.  It might not make sense.  To those within this world, this alternate reality, I can only hope these words ring true.  When we lose one of our number, we lose a part of ourselves.  It is a death writ small; it may be just a fragment of our fierceness, our fight, but the sense of loss is acute and painful.  In our own struggles, we have come so close to the precipice; we have stared into the void.  When we watch another go, we lose our own footing for a moment; vertigo kicks in. A few rocks come loose, and tumble into the unknown below.

Somehow, we manage to hang on and step back from the brink.  Somehow, we leave the demons clamoring in our wake as we run as fast as we can into the future – unseen and unknown, but rich with possibility.  We go on.