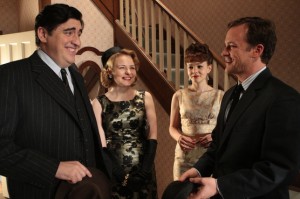 For me, the buzz and whether or not a film is Oscar-worthy bears no relation to my enjoyment.  I want to be moved by extraordinary performance, story, dialog and imagery.  This movie succeeds in a few of those areas, but fails notably in the ending.  We got an amazing performance from young Carey Mulligan as Jenny, a gifted high school senior with dreams of a glamorous life in Paris.  Peter Sarsgaard was his usual, reliable, top-notch self.  And then there were two great treats in smaller roles from Alfred Molina as the well-meaning, but misguided father and Olivia Williams as the supportive but concerned teacher.

Mulligan’s performance alone is enough tojustify seeing the film. The script is subtle, but her face and body movement, in short, what she does without dialog, really makes this something special.  And the story is presented with a tender touch and the specter of bad things (deceipt, betrayal) is managed carefully.  In the span of a feature film we see a lot of genuine character growth, packed into a stylish and entertaining film.

The problem is with the ending.  And, as one of my companions mentioned, that’s the impression with which you leave the theater.  It’s not a disaster, but it’s a disappointment.  The turn in the plot is perfectly fine, but the smooth flow of story-telling stops abruptly.  The movie’s resolution, which is perfectly reasonable is so haltingly portrayed that we couldn’t help but wonder what happened.  Did a test audience tell them to put a tighter bow on it?  Was the movie cut down or elongated?  It’s hard to say, but something is clearly wrong with the ending.

Aside from that significant criticism, it’s still a nice movie with an impressive lead performance.  Sarsgaard is positively generous in facilitating Mulligan’s big moment.  He just does a great job of keeping the focus on her.  And even with all she goes through in this coming-of-age story, the transformation never covers up the little girl that you meet in at the beginning of the film.  It’s just a shame, that by the end, her story has inadvertently run off the tracks.