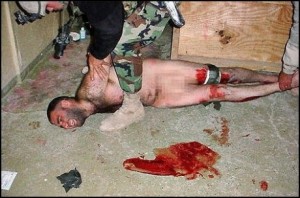 After talking a big game about openness in government, Obama has changed his mind and is, apparently, going to oppose the release of more photos.  These are photos of Americans torturing ‘detainees’ in several locations, not just at one ‘rouge’ facility.  This is all coming out of the ACLU’s Freedom of Information Act request, so it is moving through formal, legal channels.  The United States Department of Defense has already lost its appeal to the Circuit Court, which means there is only one place left to go – you guessed it!  Paging Justices Scalia, Alito, Roberts, Thomas, et al.!

So, if Obama is going to keep these pictures secret, here’s the procedural posture, as reported in DailyKos:

Which leads us to today.  By my calculations, the government has about a month left to file a petition for a writ of certiorari before the Supreme Court.  As to whether the Court will review the opinion below, the question is generally whether the circuit court’s interpretation of the relevant FOIA exemptions or the Geneva Conventions created a split in the governing law with its sister circuits, or has otherwise “so far departed from the accepted and usual course of judicial proceedings, or sanctioned such a departure by a lower court, as to call for an exercise of this Court’s supervisory power” or otherwise presents “an important question of federal law that has not been, but should be, settled by this Court.”  Put in other terms, the government needs four justices to believe that there are five justices who’d overturn the opinion below … and given the way the Court operates, the nine justices involved will include Justice Souter’s successor, whomever she may be.

So, first they have to decide if this is something they even want to look at – the all important ‘Writ of Certiorari.’  If the answer at that stage is yes, then the parties will file briefs, everyone else will file amicus briefs (just to have their two cents on the record), and argument will, eventually, be scheduled.   The wheels of justice turn slow.

The post quoted above really does a nice job of laying it all out.  The government’s argument (this dates back to the Bush administration) is that the lives of certain people may be put at risk if the pictures are made public.  The appeal court, which has already sided with the ACLU in favor of disclosure, based it’s ruling, in part, on the government’s failure to identify specific people that might be harmed.  The current administration is stuck with that argument.  they can not now go back an argue that national security will be jeopardized.  That issue is not part of this case.  This is a perfect example of how the Courts work – they decide cases, they don’t make law.

And also, remember that they can’t now go and name the people who might be endangered.  Once the case is on appeal, evidence is closed.