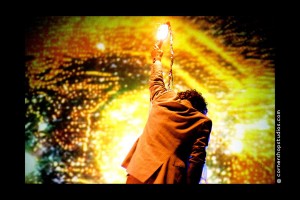 And I appreciate it, but Cousin Steve and I got totally fuckt over by the weather last night.  About eight songs into their headlining set of what was described as an ‘all-weather event’, the Flaming lips were forced into a rain delay that eventually became a cancellation.  I have never been so wet.

When we left the house, Em asked, “are you going to take a umbrella?”  It had rained earlier, but wasn’t raining when we left.  “Nah,” I replied, “we’ll just get wet.”  And Steven added, “As Peter Gabriel said, ‘It’s only water.'”  Oh, what fools we were.

OK – so what did we see?  Of course, there was not a speck of rain for either of the two opening acts.  A word about such beasts – they generally irritate the shit out of me.  There are several reasons for this reaction.  It could be one or all of the following:

Stardeath came out first.  They had a retro-hipster look that went nicely with their alt guitars, a Jazzmaster at stage left and a crazy looking SG knockoff, possibly a late 70’s Yamaha, with tremolo, decals and a pointy protrusion on the headstock, perfect for popping balloons.  That came in handy, because this outfit is fronted by Dennis Coyne, whose Uncle Wayne appeared to be encouraging the crew to shoot various projectiles at his nephew Dennis.  Despite their earnest attempt to bring the psychedelic noise, it ended up sounding more like a Muppet Babies version of The Flaming Lips.

We were next treated, however, to a wonderful pallet cleanser in the form of Explosions in the Sky.  This Texas quartet is a no frills (no light show, no costumes) instrumental space rock jam.  Thirty minutes of drones and delay pedals, beginning with two guitars, bass and drums, and then switching to a three guitar attack with no bass.  The attitude reminded me of The Battles but achingly simple, instead of mathematically intense.  They clearly had a set and the songs and progressions varied in dynamics with great agility.  They moved as one.  I don’t know that I need to hear all their studio albums (there  are six), but I was very impressed by the satisfying sonic meditation.

And then we have The FLips.  I had tickets to one of their shows a few years back and it was simply canceled a few days before.  I think there was a refund, but we never got an explanation.  I love the progtatsic tendencies of this band and I know from video clips that they are a sight to behold in person.  But the charismatic Mr. Coyne knew that we might be in for some measure of disappointment and told us, so gently and lovingly, that we might get screwed.  Rain was coming.  The hope was that they would be able to stop and the storm would blow through and then they’d start back up.  The amount of lights and video and equipment make it obviously impossible to manage the performance in heavy rain.  Even though the stage has an awning, the rain was expected to be blowing all over.  They were apparently also concerned for the safety of the crowd.

And so they began.  They entered by coming through a vagina and just started rocking like their lives depended on it.  Wayne got in the Hamster ball and headed out into the crowd.  Confetti and balloons were everywhere.  Dancers on either side of the stage were dressed in either white mini-skirts, bustiers and capes, or as giant fuzzy white bunnies.  And, despite my expectation to the contrary, there was very little ‘piped-in music’, due in part, I think, to the presence of an additional guitarist in stage.

After about 8 songs the rain started.  As the first big drops fell, it was simply a drizzle.  It was cooling and refreshing.  Then, just as the band got into ‘Vein of Stars’, the onslaught began.  I was soaked to the skin instantaneously, and even though I knew what was going to happen, it was a total shock to be that wet that quickly.

We tried to stick it out, hoping it would pass, but it did not.  The rain would slow for a moment and a bandmember would appear on stage, and then it would come down twice as hard.  The crowd stayed remarkably composed, but it was a mess, to say the least.

In response to demands from the audience, Wayne got back in the hamster ball for a few minutes and went crowd surfing once again.  That was mighty big of him.  After that, I had a feeling we were done, and I started the trek home.  Steven inexplicably tried to tough it out a little longer, but showed up at my door sopping wet soon after I got back.  I actually could hear the show being cancelled as I headed to Columbus Blvd and Spring Garden Street, where there was six inches of standing water in the intersection.

It was a night to remember, and not for all good reasons.  I know I’ll get another chance to hear ‘Do You Realize’, ‘She Don’t Use Jelly’ and maybe even ‘Pompeii Am Gotterdammerung’.  But last night I had to have a glass half full of good live music, and overflowing with rainwater.